Think about being a prizefighter who gets knocked down in the middle rounds of the fight but gets back up and keeps punching and wins the bout. That’s Doug Gordon, your 2022 Top Alcohol Funny Car champion, who recovered from a nasty midseason crash to win the title.
21 Dec 2022
Phil Burgess, NHRA National Dragster Editor
2022 NHRA world champion

Think about being a prizefighter who gets knocked down in the middle rounds of the fight but gets back up and keeps punching and wins the bout.

Or a hockey player, bruised and battered and sent to the locker room in the second period only to return in the third to score the winning goals.

That’s Doug Gordon, your 2022 Top Alcohol Funny Car champion, who recovered from a nasty midseason crash to win the title, the second of his career and the first in a full season after a four-way battle with reigning champ Sean Bellemeur, past world champ Shane Westerfield, and hard-charging D.J. Cox Jr.

Gordon and his family-operated Beta Motorcycles team – father Doug, mother Cheryl, and teenage daughters Maddi and Macie, the latter of whom do all of the heavy mechanical lifting on the car between rounds – won the championship in the COVID-19-shortened 2020 season but didn’t get all of the perks, like an awards ceremony befitting his accomplishment.

Despite installing a new clutch system, the team got off to a relatively fast start in 2022 with a semifinal finish at the NHRA Winternationals and, after a stumble at the regional event in Phoenix, reeled off five straight wins, including the NHRA Four-Wide Nationals and West Region event at The Strip at Las Vegas Motor Speedway then a pair of wins in Texas at the NHRA SpringNationals in Houston and the Central Region event at Texas Motorplex and the Summit Racing Equipment NHRA Nationals in Norwalk.

“The biggest race of the year was Norwalk, which finished off the five in the row,” he said. “I was really bummed because we ended up with Bellemeur on our side of the ladder in the second round, and, oh my gosh, that’s never good. We had to go rounds, and anytime you run against him, you’re a 50-50 at best, but we ended up beating him in the second round and then ended up with D.J. Cox and the final. 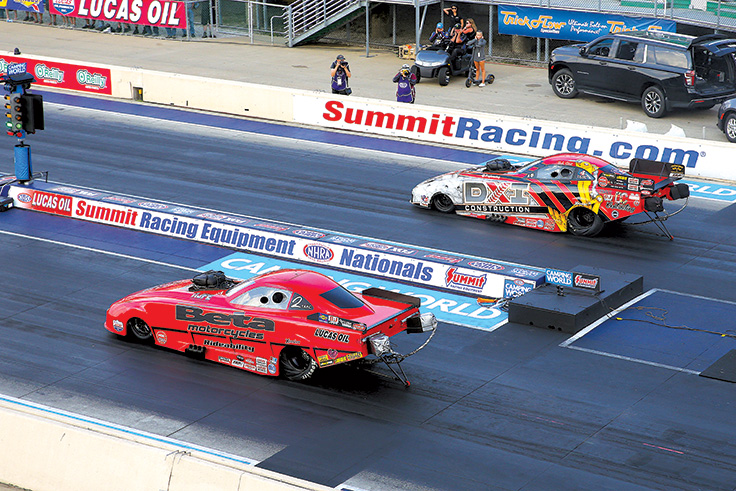 “We weren’t running quite as good at Norwalk as I think we should have been. We had about four races in the middle of the year where we had something going on with the engine that was causing it to be down on power, and it started in Norwalk. Luckily, the track wasn’t very good, and people weren’t applying as much power as they really had, but we won a good close race in the final against D.J., and I think that was, to me, the biggest win of the year, just taking out those two guys.”

Three first-round national losses followed – in Seattle, Topeka, and, unforgettably, in Brainerd, where he lost control of the car and crashed in a pivotal race with red-hot Westerfield, who had won in Topeka and would win in Brainerd.

“We lost it Seattle first round, we lost in Topeka first round, so then we were pretty discouraged going into Brainerd. We didn’t know whether we had it figured out, and Shane was right on our heels, so beating him would have been huge.

Gordon’s Beta Motorcycles Camaro drifted out of the groove and made a hard left turn across the centerline behind Westerfield, impacting the wall and rolling onto its top before grinding to a halt upside down. Other than a few bruises, Gordon was unhurt.

“It was getting out of the groove a little bit at the top of low, but when I shifted in second, it was staying right there,” Gordon recalled. “I was able to go all the way through second [gear]. I had [the steering wheel] turned left, but it wouldn't turn; it was just kind of staying right where it’s going. I shifted into high, and it started moving more towards the wall. I let off the gas and was just kind of coasting for a second there, and I’m like, ‘Shoot, I don’t see him.’ The car was straight, so I just hit the gas to try to get across the finish line in front of him. I let off at the finish line, and shortly after that, all of the sudden, the thing just turned sideways. I was obviously too aggressive. It was a big round, and I looked over and didn’t see him and got back on the gas. Being out of the groove and getting back on the gas was not a good idea. It definitely upset the car. 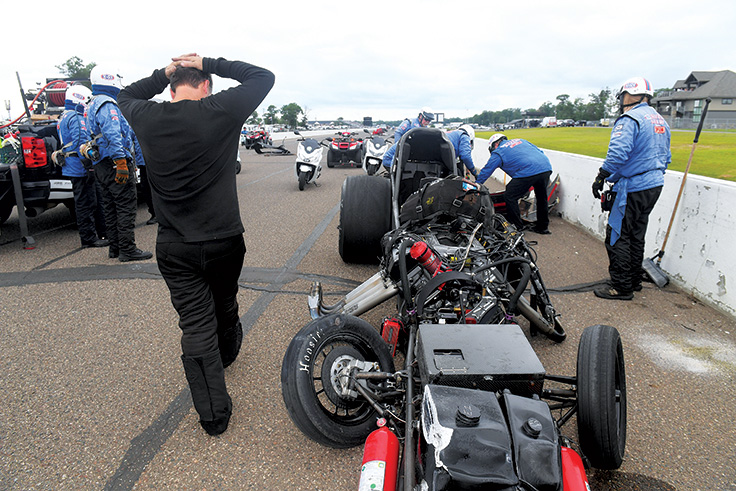 “So, when Shane beat us for that round, I believe he went around us. He had been in the final round of six, seven, eight races in a row and was on a tear. We were feeling so good when it’s five in a row, and then Shane was doing the same or better, and we were like, ‘C’mon, dude, you’re cutting us no slack.’ Then we crashed, and we were really mad because we thought we were heroes, but we’re really zeros. At that time, I probably gave us a 20-30% chance of being able to come back and win the championship.”

After a lot of research, consultation, and video review, the Gordons pegged the problem on aerodynamic refinements they’d made to the body over the years that ultimately tipped the balance too far. The team added taller spill plates, a lip of wickerbill in the back, a lip on the side of the new body, and fender flares at the front wheel wells for its return to competition in early October at the North Central Region event at World Wide Technology Raceway.

We flew in there to do testing on Wednesday and Thursday. It banged the blower on the first run at 100 feet out, and then basically we never got out of low gear on Wednesday. We’re like, ‘Man, this is gonna be a struggle,’ and then on Thursday, we got one run, and we got it down the track. We went like 5.55, and that was a big confidence builder for me, then we beat Bellemeur in the final to win the race. It was a huge victory.”

“That was a huge blow to the championship, but then we thought back to when we won the championship in 2020 and Hool also beat us in Houston in round one at the end of the year, and we still won the title, so maybe this was an omen,” he rationalized. “But we knew he had to do well at the three final races to win the championship.”

Gordon did just that, scoring a monster win at the NHRA Nevada Nationals in Las Vegas, where both Bellemeur and Cox needed to win to keep their title hopes alive and then another win at the Las Vegas regional to complete a perfect regional season despite running only five of the six allotted.

“I’ve never experienced so much pressure as I did those two races in Las Vegas, and I did not do well under the pressure,” he admitted. “I was terrible on the lights, but we got lucky, and the car ran good.”

Bellemeur’s early loss at the regional assured Gordon of at least a second-place finish, and he led Westerfield by one important point heading into the season finale in Pomona, allowing him to control his own destiny with an event win.

It didn’t turn out that way as Westerfield red-lighted in round two at the Auto Club NHRA Finals, and Gordon, thanks to qualifying No. 1, had an easy path to the semifinals, then to the final where, although he lost to Bellemeur, the title was already his. 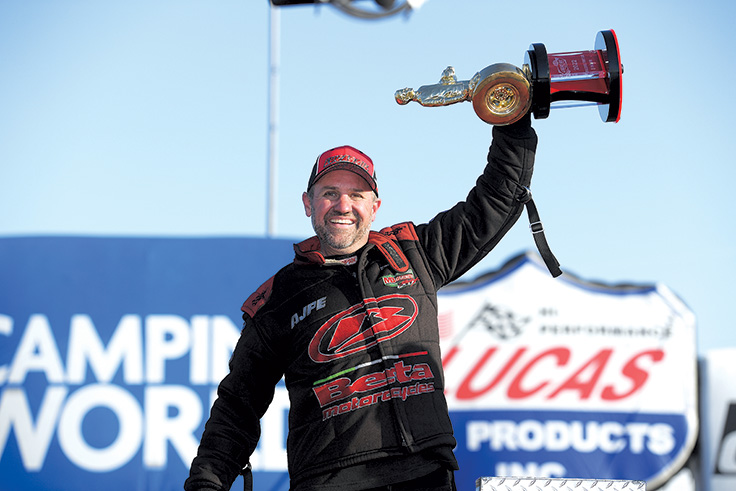 In addition to his parents, Mike and Cheryl, Gordon praised the help and support of his wife, Christina, daughters Maddi and Macie, as well as sponsors Beta Motorcycles, Lucas Oil, NGK, and the family business, Morro Bay Cabinets, and the technical help of AJPE, Bullet Cams, Hoosier Tires, and B&J Transmissions.

Gordon will only get one more chance to add a third title, as he’s already decided to turn the seat over to daughter Maddi in 2023

“But I know I’m gonna get to finish my career with the No. 1 on the car, no matter what, so that’s a great feeling,” he added. “Hopefully, the story just keeps getting better, but in the meantime, we’re having a really good time the way we’re doing it as a family.”