Although drag racing is very much a one-on-one sport, Jeremy Hancock learned firsthand how much of a team it takes to win a championship.
13 Dec 2022
Kelly Wade
2022 NHRA world champion

Although drag racing is very much a one-on-one sport, Jeremy Hancock learned firsthand how much of a team it takes to win a championship. On the way to his first NHRA Lucas Oil Drag Racing Series Top Dragster championship, Hancock was given a mighty assist by racing friends who graciously loaned him top-of-the-line race cars capable of achieving greatness.

It was beyond what Hancock could have dreamed. More than anything, the former NHRA Summit Racing Jr. Drag Racing League competitor and 2018 NHRA Summit Racing Series champion has considered himself a bracket racer. He’s kept close to home, accepting that although reliable, his naturally aspirated entry would not be competitive amongst those with power adders on the national stage. 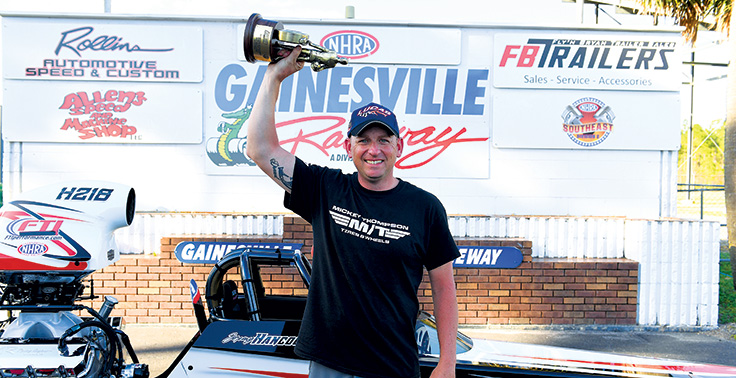 This season started with an impactful win at the NHRA Southeast Division opener at South Georgia Motorsports Park, and it was followed immediately by a win at Division 2’s Baby Gators at Gainesville Raceway. In the spring, Hancock reached the quarterfinals at Silver Dollar Raceway, then the final round at Rockingham Dragway. Come autumn, after claiming victory at GALOT Motorsports Park, he began to realize the position he was in.

“I’m like, ‘Dad, I don’t know how this points stuff works out, but I’m pretty sure we’re either leading the world right now or very close,’ ” recalled Hancock. “We had plans to go to Bristol for a bracket race, but I said, ‘I think we need to go to Charlotte that weekend for the nationals and really make a run at this thing. We have to go for it.’ We did, and we won the event.”

After scoring his first national event win at zMAX Dragway, a fire was lit. The only thing standing in Hancock’s way was traveling outside the region and into the land of much quicker Top Dragsters.

“My stuff qualifies in the Southeast, but it won’t qualify outside,” explained Hancock. “But a good buddy of mine, Jimmy Mayfield, has a Pro Charger car. I gave him a call and said, ‘Jimmy, I hate to ask you for a $125k race car, and if something breaks, I really can’t fix it. But if you’re willing, I would appreciate it.’ He said, ‘When are we going to leave?’ He shut his business down, and me and him went to St. Louis.”

Hancock reached the semifinals there. However, the transmission gave way that round. They didn’t fully comprehend their reality until getting to Orlando, Fla., for another Southeast divisional.

“Mr. Jimmy’s car is broke, we’re standing there at my car changing the intake gaskets on mine, and I messed it up,” recalled Hancock. “The guys pitted next to us, Rocky and Robert May, walk up and say, ‘Hey, we saw you were doing really good in the national standings; what’s your plan?’ I said, ‘Mr. Rocky, I want to go out west and try to seal this thing up, but my stuff won’t qualify, and I can’t afford to spend the money just to go try.’

“He talks to his son, turns around, and says, ‘How about you take our stuff.’ I was baffled. I told him I couldn’t afford to replace it if I wrecked it or blew it up, and he told me not to worry about it. He said, ‘I’d really like you to take it.’ They didn’t have to do these things for me. It showed me how close this racing family really is.”

Hancock and his father headed west to Las Vegas with the Mays’ Top Dragster in tow, but a gutting -.007 red-light in the second round of the NHRA Nevada Nationals snatched the power out of Hancock’s hands. The firefighter by trade had to fly home for work and could only watch the outcome from afar.

Aaron Stanfield, then No. 2 in the standings, had fared no better at the national and had blown an engine in the second round. Unable to enter the division race at The Strip at Las Vegas Motor Speedway the following weekend, Stanfield was out of contention. Alan Kenny still had a mathematical chance, though, and so Hancock and his father watched anxiously on NHRA.tv.

“He won first round, and I was getting antsy,” told Hancock. “My dad’s like, ‘You have to calm down.’ It was a lot of pressure, and I would have felt way better at the track controlling my own destiny. But second round, Al Kenny runs Trey Vetter, and Trey won. It was just a weight lifted off of me. All of the emotions came at once. Me and my dad just laughed and jumped and cried and hollered.

“It was so awesome. It started with me and him when I was a kid. He’s always been with me and pushed me, and I’ve loved every minute of it. To be there with my dad in that moment, to share that with him. It was just full circle. God’s plan just always works.”

Hancock returned to the West Coast for the Auto Club NHRA Finals and raced the Mays’ Top Dragster to the semifinals for a strong finish.

“We’re going to try to go after it again in 2023,” said Hancock. “As far as me getting a true Top Dragster, that’s not going to happen; it’s just not in our budget. But we’re going to go when we can and stay in the Southeast. If it looks like we can get in some nationals, we will. This year has taught me that you never know what the future holds.”

Hancock shared enormous appreciation for everyone who made the outcome of this season possible.

“First off, I’d like to thank God. He’s taken me places beyond belief, and I’m grateful for all of the opportunities he’s given me,” said a humble Hancock. “It was so special to win this championship in memory of my grandmother, Granny Rose, who passed away in the middle of the season. She was always praying for me, and every time I talked to her, she always asked how her ‘racing star’ was. I wanted to win this championship for her, and I’m happy we did.”