The Sonoma, Calif., hills will roar with the sound of NHRA Camping World Drag Racing today as the 2022 Denso Sonoma Nationals qualifying continues with two sessions for fans to enjoy. The second stop of the Western Swing is a race team and fan favorite alike as the perfect weather, record-setting track conditions, and Sonoma Raceway's world-class facility combine to make for a superb race weekend. Many fans turned this weekend into an epic family vacation and have filled the track's campgrounds and RV park for a Speed For All three-day weekend. Earlier this week Sonoma Raceway announced it had completely sold out every camping spot available on this stop of the NHRA Camping World Drag Racing Series. 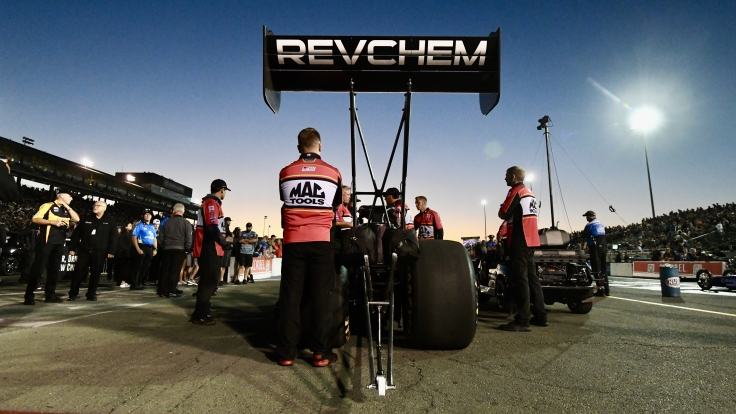 The cool evening air from last night will be replaced with clear blue skies, and Leah Pruett is looking for nothing else to change as she plans to defend the top spot. Doug Kalitta, who claimed the number two spot, is looking to focus on race day and gather data today. The buzz at Sonoma is that this could be the race where the Kalitta and Alan Johnson pairing shows its true capabilities. Kalitta's clean 3.694 at 331.45-mph run and Johnson's connection to Sonoma make the team one to watch today and on race day. “It’s no secret we haven’t run up to our expectations," said Alan Johnson, "but that run was a good indication of the progress we’re making. ”

2021 Denso Sonoma Nationals winner Steve Torrence will be looking to stop that success and repeat his effortless win from last year. Watch for strong runs from the team today.

Alex Laughlin also showed improvement in his effort, using Scott Palmer’s second car, and this 3.840 at 314.97 put him in the fourth spot and means the dust could continue to gather on his Pro Stock efforts. “Going into Denver we decided to play it safe, but this is Havoline country with Chevron right down the street,” said Laughlin.

While their success is to be lauded, the teams that underperformed expectations will be the ones to watch in the first session today. Brittany Force,  Mike Salinas, Antron Brown, and Clay Millican are all expected to throw down. Teams will be looking to turn last night's disappointment into a good position and competitive race-day data. 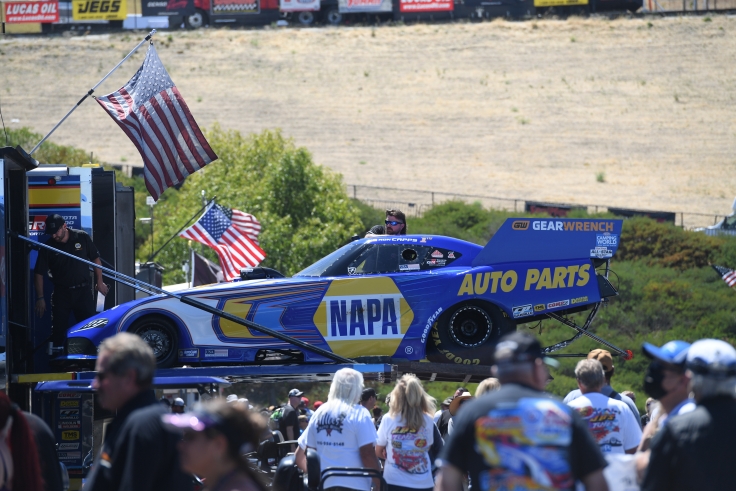 The war for Funny Car supremacy in 2022  is being waged every race weekend by Robert Hight and Matt Hagan. Both teams seemed destined to meet each other in the final and look to position their efforts on opposite sides of the ladder come race day. Despite the pressure of expectations, Hight surpassed everything Hagan’s car was capable of, and we saw the Auto Club Chevy go to the top spot with a 3.825 at 332.75 to Hagan’s 4.018 at 314.02 mph. “We just went back and looked at some of the stuff we did earlier this year when we had a track this good and we just hit it,” said Jimmy Prock.

Ron Capps looks to wedge his way into the Hagan/Hight battle and qualify in the number two spot. Capps has had success here and the pressures of team ownership seem to be a non-issue for his effort. Capps made a strong showing Friday night fiish with a 3.846 at 334.48 mph run. “You get one shot and you let her go and see if it holds,” said Capps’ crew chief Dean Antonelli.

Nipping at the heals of Hight and Capps this weekend is Alexis DeJoria's GR Supra tuned by Del Worsham. DeJoria made a strong 3.867 at 330.63 run Friday with teammate J.R. Todd in the next lane.  Todd’s pass was short-lived. DeJoria’s run took her to the number three spot. “That wasn’t too bad,” said Del Worsham to his father after DeJoria’s run.

Terry Haddock’s Circle Racing Wheels Funny Car will sit out today's sessions as the team fixes the car after a fire damaged the car in the first session. The team will use their time wisely today to ensure they are ready for tomorrow's race day.

Blake Alexander and Jim Head used a similar strategy coming into Sonoma that looks to have paid off. They decided to sit out of Denver to avoid having to do the unique conversion of the car for the single race. Alexander went to the number four spot with a 3.898 at 326.56 mph. “I’m appreciative of Jim [Head] for deciding to send it and I was just holding on for dear life,” said Alexander. 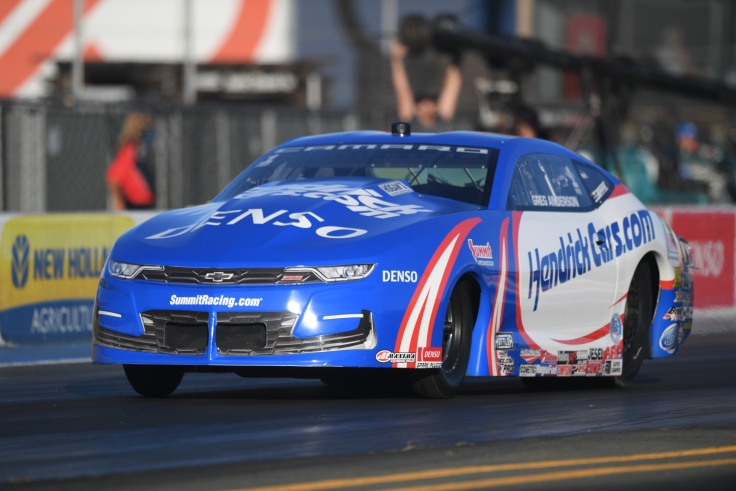 Today's weather is looking to be similar to yesterday's session, so huge atmospheric advantages are not expected to disrupt the Pro Stock performance today. The Elite Motorsports dynamic duo of  Erica Enders and Aaron Stanfield seem unstoppable this year, but after the first session, it was teammate Troy Coughlin Jr who was able to put the new-found Elite Motorsports power to the ground with his  6.549 at 210.87-mph run. Mason McGaha was right behind Coughlin with his horsepower of his own, and  Kyle Koretsky with KB Racing power showed that nobody's 500-cid DRCE engine was going to run away with a power advantage in Sonoma.

Greg Anderson will be one to watch as he looks to improve his qualifying times too.  Anderson and the McGaha's will be looking to make incremental gains on Coughlin and avoid being paired against their strongest competitors in Sunday's first round. 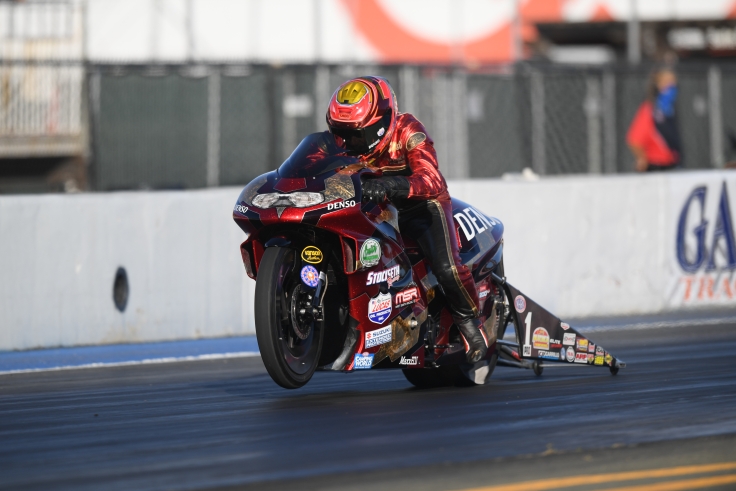 Steve Johnson's Suzuki made a strong run on Friday night and pulled a 1.039 60-foot time that turned into a run strong enough to move him to the number one spot. He celebrated with an unusual ( for Johnson) slice of pizza in the media center after the session. He has had a great motorcycle all year long, but the competition has closed the gap in the standings.

Working hardest to close that gap is Matt Smith. Smith's three-bike team has meant a division of his focus, but not diminished his performance. Look for him to improve his team's Friday night numbers (and sustain his own) during his sponsor's race here in Sonoma.