There are only four dragstrips on the current NHRA Camping World Drag Racing Series tour where Cruz Pedregon has yet to claim victory, and Seattle's Pacific Raceways is one of them.
30 Jul 2022
Kelly Wade
Feature

Veteran West Coast racer Cruz Pedregon has been campaigning dragsters and Funny Cars in the alcohol and nitro ranks since the late 1980s, and he's picked up wins everywhere from Pomona to Englishtown. There are only four dragstrips on the current NHRA Camping World Drag Racing Series tour where he's yet to claim victory, and Seattle's Pacific Raceways is one of them.

"I'm not from Seattle, but being a West Coast racer from California, it feels like home to me up there," said Pedregon, who is currently No. 6 in the Funny Car standings and in the hunt for his first win of the year in the Snap-On Tools Dodge Charger SRT Hellcat.

"Everything feels right, but we've never punched it through in Seattle," continued the 58-year-old driver and team owner. "We definitely want to win there, and we're going to try to do something about it this week."

Pedregon was runner-up in Seattle to John Force in 2004, but aside from that, round-wins at the picturesque facility have been hard to come by for a driver who has more on his record – 609 after last weekend's Sonoma Nationals, to be precise – than any other currently competing driver in the category aside from Force (1,405) and reigning champion Ron Capps (826). 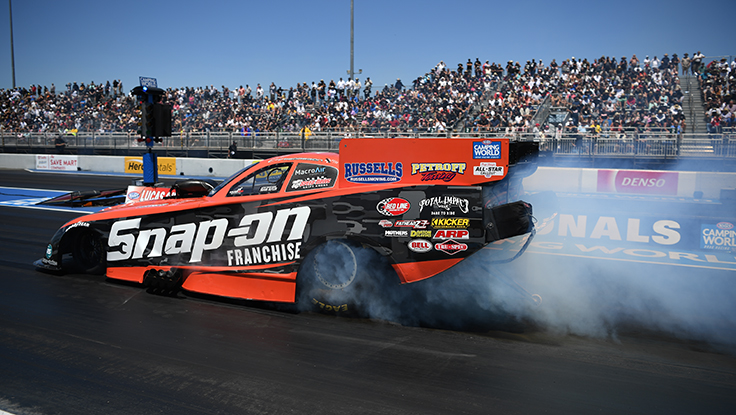 Conversely, Pedregon procured one of the most memorable round-wins of his career at Pacific Raceways in 1991 driving for Larry Minor. That season, he saw the win light from the seat of a nitro car for the first time, and he did it with a first-round victory over Don "the Snake" Prudhomme. The next round, he was taken out by Tom "the Mongoose" McEwen to solidify the memory of a tremendous high followed by a dreadful low in back-to-back rounds against iconic NHRA figures.

McEwen saw a glimpse of the future and was prophetic in his top-end television interview.

"That Cruz Pedregon, watch him. He's an up-and-comer, and he's a good one," said McEwen, after their race against one another in the second round. "I raced with his father [Frank Pedregon] many years ago, and he's a class act with Minor and those guys."

Pedregon would go on to win the Funny Car championship the very next season, 1992, and then again in 2008. Pedregon has been active in all but one season over the course of 30 years, with hardware claimed at 17 different NHRA racetracks, past and present. To date, he has 38 national event wins. On the current tour, he's only missing trophies earned in Epping, Bristol, St. Louis, and, of course, Seattle.

"I've brought some good cars there, and I can't remember being in a lot of semifinals – I just do not know why," admitted Pedregon, who was a Pacific Raceways No. 1 qualifier in 1993 and 1995. "I love it up there; it's a pretty place, and more than that, there's a lot of history there from back in the day. Bucky Austin, Pat Austin, and even before that, a lot of great racers.

"I remember the first time I went to Seattle was when I was racing alcohol there in 1988 or '89. I'll never forget pulling up, and it looked just like it did in the pages of National Dragster. I was thinking about Jerry "the King" Ruth and Hank Johnson – they were two of the biggest names to race up there in the Northwest and part of its history. It's those kinds of things that have winning this race at the top of my list. We want to be able to check that box."