The team shirt is now blue instead of purple and the incandescent and ever-present smile is a little wider, but otherwise, Clay Millican looks the same despite the seismic change in the team’s fortunes after NASCAR and IndyCar team owner Rick Ware purchased the Parts Plus team from Doug Stringer last week.

Inside, Millican is bubbling over with enthusiasm and excitement for what lays ahead in his career, including a deeper arsenal of parts and a new driving contract that carries him through at least the end of the 2025 season.

The team’s Top Fuel dragster also now wears a purple skin as well as additional backing from migraine-relief medication NurtecODT but again, it’s what you can’t see that will reduce the team’s potential headaches.

“We got the first [engine] block ever,” said Millican like a kid after Christmas. “We’ve always had used blocks and heads and, overall, we’ll just more parts. It’s had to be unbelievably hard for the person tuning the car when you don’t even know if you’ll have enough short blocks for the weekend, but now there’s a peace of mind knowing, ‘Well, if we hurt it, we'll be OK. 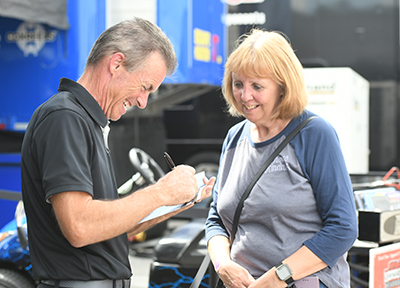 “As a driver, there's been piles of runs over the years where I shut off and it might have been OK but not might have been, and I couldn’t risk it. It certainly creates a little freedom for everybody to know ‘OK, if we break it, we can go to the next race or the first run.’ I love Doug; he’s literally given it his all and it’s got harder over the years. When we first started, we had a fair amount of stuff that wasn't all brand-new stuff and it's just gotten harder and harder as his bank account was coming down. Essentially, before he started this eight years ago, he was retiring because he got out of NASCAR, and, Lord knows he has spent and spent and spent.”

“It was just the right decision at the right time,” said Stringer. “I'm not a drag-it-out guy. It was partly the huge growth spurt of the sport and all the economics of staying competitive that go along with it, but I've also had some family things and health issues that just I needed to focus on, I was just at a loss. I knew I’d have to probably step away for a couple of weeks or a month

“There was no way I was going to leave the team hanging. I would have just dug deeper into the ground, and gotten some more coffee cans out of the backyard, but the coffee cans were getting slim.”

With Ware’s purchase, the team will move out of its small Tennessee base into a luxurious 17,000-square-foot shop in Mooresville, N.C., and the parts are rolling in. Mike Kloeber, who was with the Stringer team earlier this year, has returned and will serve as wingman for tuner Jim Oberhofer. Kloeber had previously been hired by Ware as he was initially trying to build a new team from scratch, but the Stringer solution was a true shortcut to getting the team up and running.

All of this will be a boon to a team that’s probably done more with less than any other touring team in the series.

“It's been pretty dang cool,” said Millican. “There's a lot been going over the last 14 days. On Wednesday or Thursday, the parts started coming on and everyone was over like, ‘Oh my god, look at all the stuff!  Holy crap, we’ve got parts.’ ”

The team opened their account at the Dodge Power Brokers NHRA U.S. Nationals Friday night with a solid 3.76 that had them ranked eighth heading into Saturday.