Lance Abbott came out swinging with two wins and a runner-up in his first three races. By the time it was over, he’d outlasted an extremely competitive field to win his first championship.
14 Dec 2022
Kevin McKenna, NHRA National Dragster Senior Editor
2022 NHRA world champion

Lance Abbott acknowledged that his racing program turned the corner last year after he refined the setup on his six-second Chevy S-10, but his first divisional win in Dallas and a Top 10 finish in the competitive South Central Division provided only a brief glimpse of what was to come in 2022. This season, Abbott came out swinging with two wins and a runner-up in his first three races. By the time it was over, he’d outlasted an extremely competitive field to win his first championship.

“I’d have to say our program turned the corner last season,” said Abbott, who began as a bracket racer and also spent time in the Texas Pro Stock Association before turning to the Top Sportsman class. “We met Marc Smith of MSR Suspension last May, and he fixed a lot of things. This year, we had our ducks in a row. I was optimistic but honestly never expected to be in this position. Marc was a big help, but I also learned a few things about mental preparation and how to control my own emotions. If you race not to lose rather than racing to win, you’re already beat, and I got a better handle on that this season.”

Abbott doubled up at the Division 4 race in Dallas and then went to the final round of his next divisional race in Tulsa, Okla. Even then, a championship wasn’t exactly the first thing on his mind. That came much later in the season.

“My wife had a baby in March, so Dallas was the first race of the year, and we scrambled just to make that,” Abbott said. “We build our own engines with my dad’s help, and we had to work just to finish the car. When I doubled up in Dallas, I was thrilled just to have two Wallys. That’s the best trophy you can have, but I didn’t even think about points. I’ve never raced for a championship before. I mostly go to win and to have fun. My wife is the one who pushed me to go to Tulsa, and after we got to the final there, we liked our chances of winning the division and then started to look at some national events because you never know if you’ll be in this position again. Topeka and Brainerd made the most sense, so we just went from there.”

Abbott scored a third divisional win in Topeka but struggled at his first two national events, including Brainerd, where he encountered a parts failure. Fast forward to the end of the season, and Abbott made the decision to head west to finish out his season over a three-week span in Las Vegas and Pomona. At that point, he was easily part of the championship discussion, but so were at least a half dozen other drivers.

For an NHRA Sportsman racer, it’s hard to imagine any situation more pressure packed than what Abbott faced when he headed into the season-ending Auto Club NHRA Finals in Pomona. Abbott was one of five title contenders still in the running for the championship, which meant there was a strong likelihood that in order to win the title, a racer would have to win the race. The fact that Abbott hadn’t previously won a national event didn’t factor much into his thinking.

“Two weeks before we left for Las Vegas, I was fully immersed in all that [points],” Abbott said. “I had so much anxiety. I’d have one good day where I felt really optimistic and another where I got down on myself. Finally, I turned all of it off and just said to myself, ‘Whatever will be, will be, and I’ll be happy with whatever it is.’ ”

Abbott was joined in Pomona by fellow title contenders Vince Hoda, Don Meziere, Ed Olpin, and Richard Okerman, and the rest of the 32-car field also had plenty of talent. With each passing round, the pressure increased, but Abbott held firm, making three very competitive runs in order to make it to Sunday’s semifinal round. Facing fellow title contender Olpin, Abbott made what could easily be considered the run of his life when he delivered a perfect .000 reaction time and a 6.886 against his 6.88 dial to officially clinch the title. Although the final was a mere formality at that point, Abbott delivered again when he topped Hoda to win his first national event title. 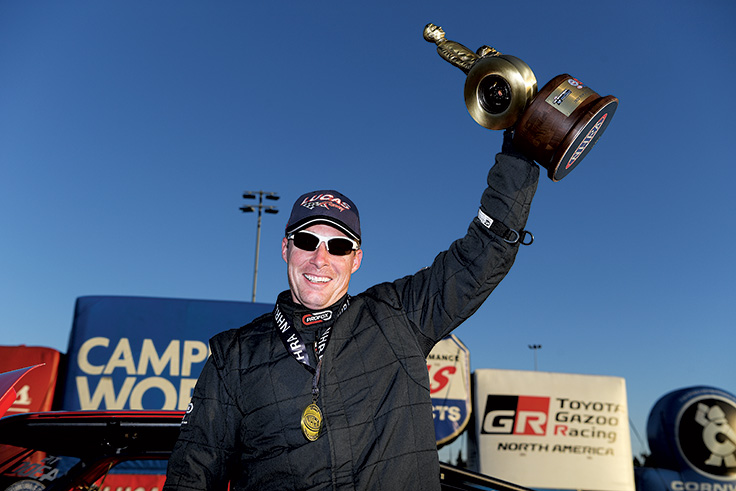 “I don’t think I’ve ever had a six-pack, at least with someone else in the other lane,” Abbott noted. “By that point, I was really feeling the pressure. My wife is an engineer, so she had a spread sheet with all the points, so we knew for certain that if I got past the semi’s, we’d have it sealed. I was set up to run my dial, but I didn’t expect to have a perfect light. Then, after we clinched the championship, I really wanted to win the race. The little [divisional] Wallys are great, but I wanted a big one from a national event. It’s amazing how it all worked out.”

Abbott gets a lot of support from his family beginning with his parents, Kenneth and Barbara, and his wife, Liz, and their kids, Madison, Jackson, Connor, and Charlie, and his in-laws, Jeff and Ethel Jeffries. He also thanked Abbott Racing Heads and Engines, John Satterfield of Dambest, and Marc Smith of MSR Suspension.