As the date of The Big Move approached in late October — timed horribly with our impending trip to Las Vegas — ND photo czar Jerry Foss reached out for my help. He was swamped spring and pulling photos for the next issue and handed me a stack of black and white 8x10s that had been lying about the photo department from various projects. Would I be a pal and file them for him before all the filing cabinets were emptied and their contents boxed up?

What you see here is some of those images, and, like the last time I did this just a few weeks ago much to your group glee, I’m going to show them off. I love sharing them to show the depth and breadth of our catalog and the magnificent work of our photographers over the years. 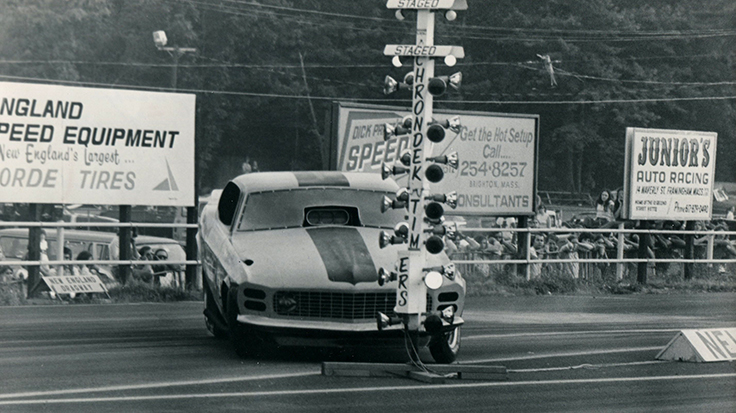 Here’s a fun photo of the Roy Harris and the Frantic Ford Mustang taking dead aim on the New England Dragway Christmas Tree sometime in 1971 as photographed by Paul Wasilewski Jr., and everything you need to know was included on the back of the photo by Wasilewski: “New England Dragway’s photographer temporarily lost his head and thought he was Les Lovett or Steve Reyes for a moment, capturing ‘Rapid Roy’ Harris on a very wayward trip through the quarter-mile. Harris managed to bring the Frantic Ford around enough to miss the Tree, just crunching a couple of bulbs and sockets.” 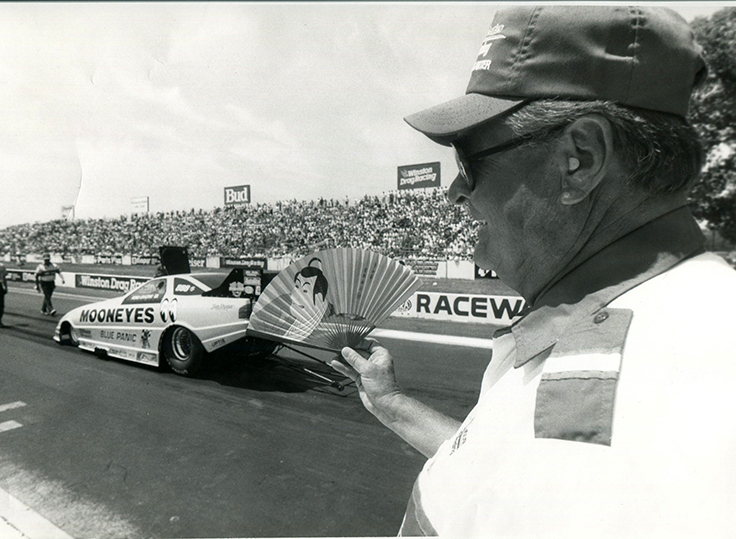 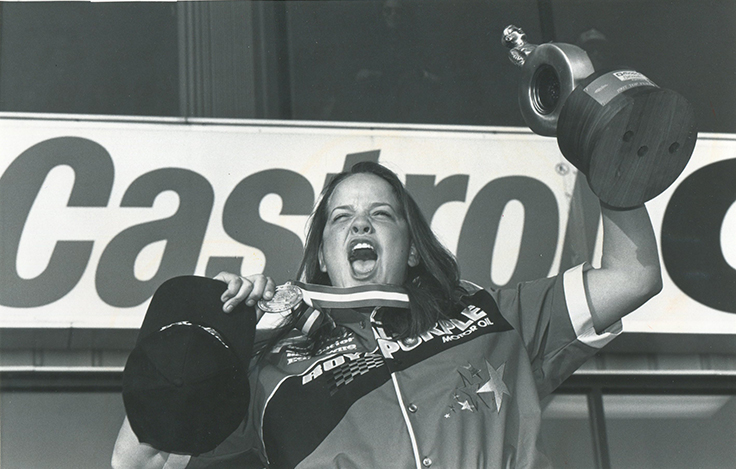 Okazaki shared the winner’s stage at the 1997 Englishtown event with young Cristen Powell, who won in Top Fuel. Twenty-five years earlier in E-Town, Jeb Allen burst upon the national scene at the 1972 Summernationals as the first 18-year-old to win an NHRA title, and Powell became the first 18-year-old female to do so with a hugely popular final-round decision over Bruce Sarver. Powell, who skipped her high school prom to attend, walked away with her first and only Top Fuel Wally as well. Was she happy about it? The photo tells the story. 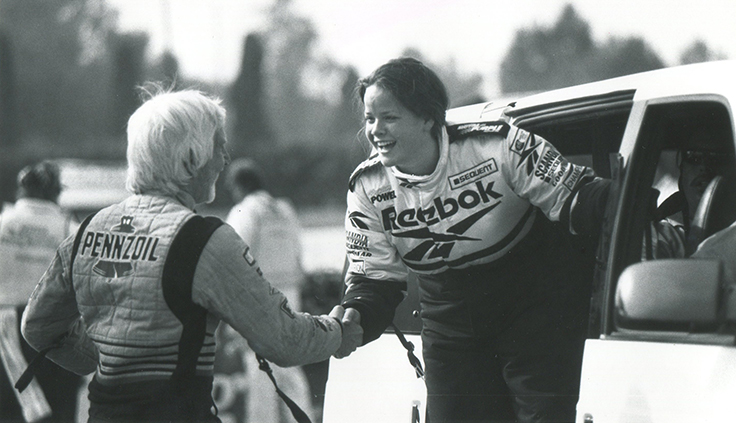 Later in 1997, Powell — then the class’ youngest competitor — accepted congratulations from its oldest tour regular, 61-year-old Eddie Hill, after beating him in the second round at the 1997 Finals en route to a semifinal finish. 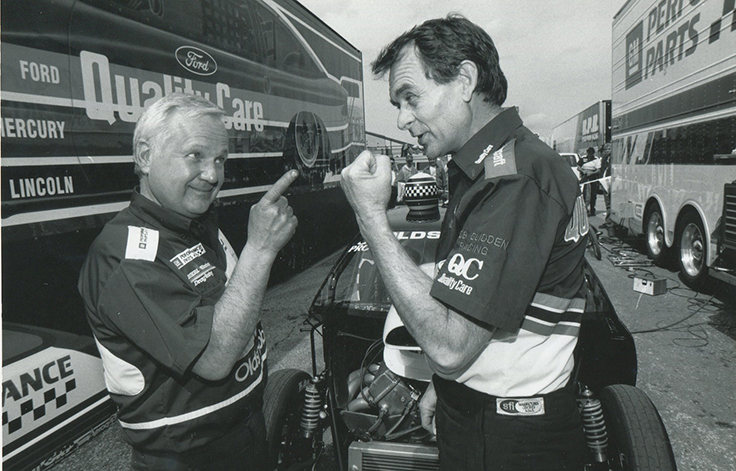 Man, I love this photo of two of Pro Stock’s all-time greats, Warren Johnson and Bob Glidden, which was shot for a series of rivalries stories we ran in National Dragster back in the 1990s. I later did my own series of rivalry stories in this column (which, oddly, didn’t include this one) that you may enjoy re-reading here. 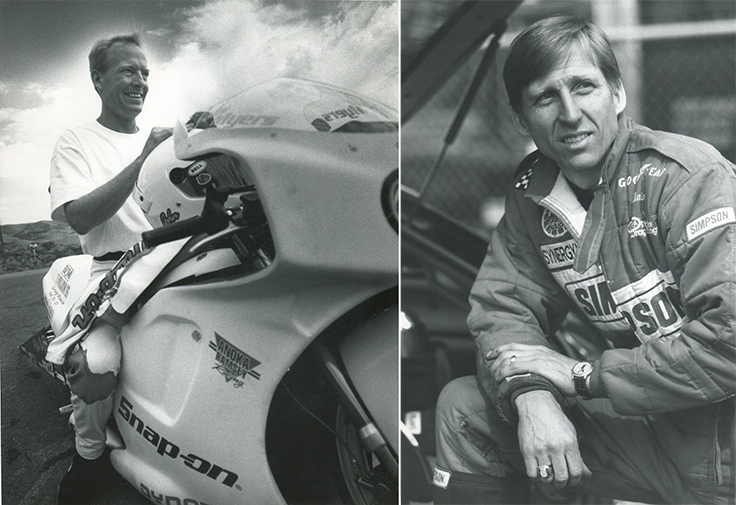 Two great portraits of NHRA champions gone too soon. John Myers (left) was, without a doubt, one of the true gentlemen of our sport and one helluva motorcycle rider, racking up 30 national event wins and three world championships. We lost him in a highway accident in August 1998 at age 40. Blaine Johnson was already a four-time Top Alcohol Dragster world championship and undoubtedly headed towards a first in Top Fuel when we lost him in a racing accident at the 1996 U.S. Nationals. He was just 34 and destined for even further greatness. Who knows what Top Fuel would have looked like with him still in the picture? 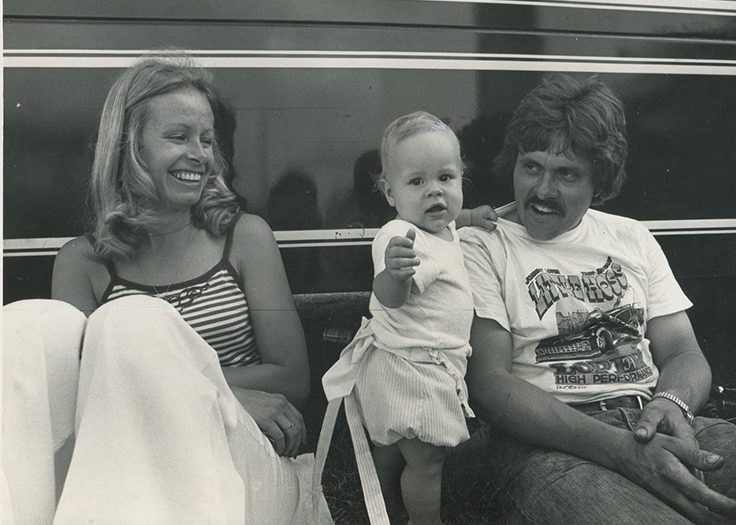 Here’s another guy loved by me and pretty much everyone else whose world he touched: Tripp Shumake, seen with wife Susie and young daughter Heather at the 1978 Cajun Nationals. We lost Tripp like we lost Myers — in a motorcycle highway accident — in November 1999, but Susie and Heather recently got to watch their son/brother, Travis, make license runs in a nitro Funny Car to follow in his father’s footsteps. Tripp would be so proud …. 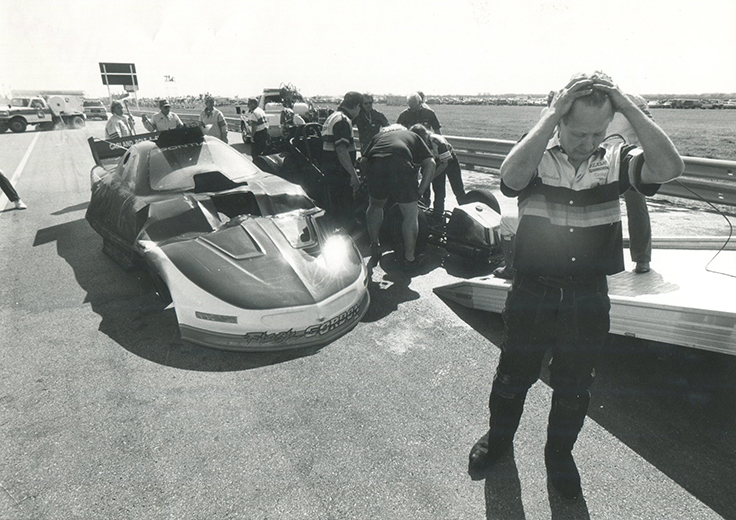 Funny Car veteran “Flash Gordon” Mineo had one of those head-in-hands moments at the 1993 Houston event after a top-end blaze consumed his Pontiac flopper. 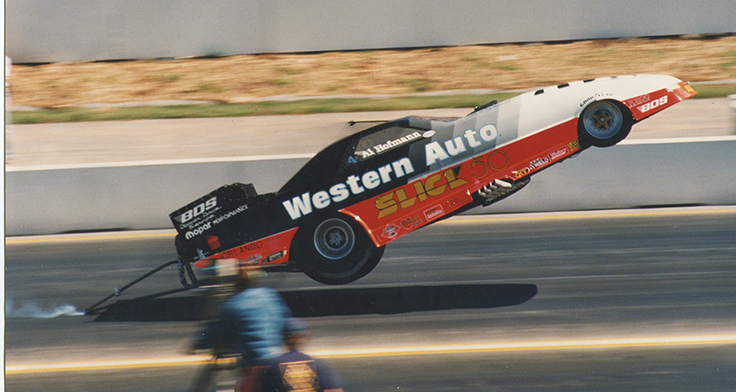 “Action Al” Hofmann was another great Funny Car wheelman, and one of the few guys that John Force could never intimidate. This fine photo of Hofmann riding the wheelie bar in his Western Auto Dodge Daytona was snapped at the 1994 Keystone Nationals by Frank Juhas, who submitted it early the next year and won the grand prize in the annual National Dragster Photo and Drawing Contest (remember those?).

And speaking of great photos, here’s a couple of memorable ones from the great Gil Rebilas, whom we sadly lost earlier this year. Gil, whose son Mark has followed in his footsteps and clearly inherited his father’s touch, was one of the great crash and burn shooters of the 1980s and ‘90s. Above is Bobby Lagana Sr. — father of the dynamic brother duo Bobby Jr. and Dom who tune on the Capco Top Fuelers — lighting up his Twilight Zone Pontiac at his Englishtown hometrack. Below is Whit Bazemore blowing his top at the 1993 World Finals at the end of a parts-strewing 1993 season. 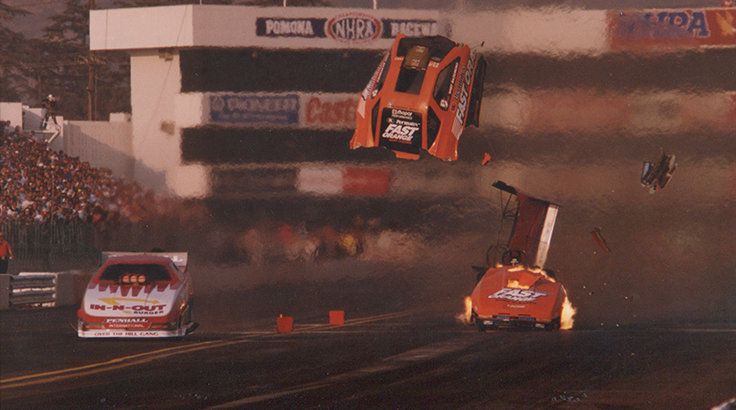 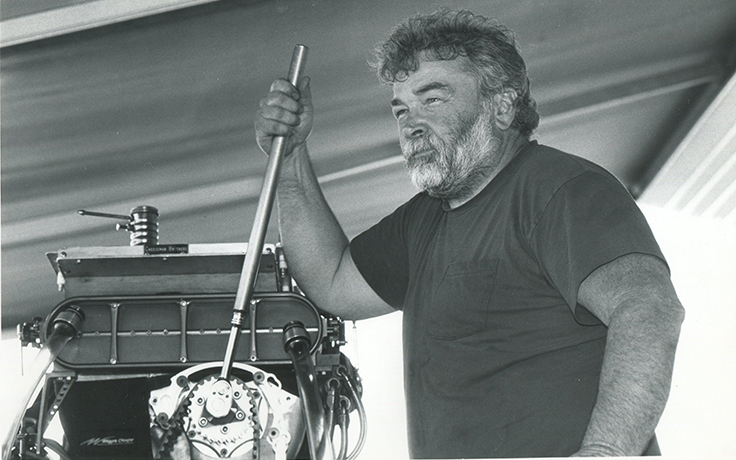 Just a fine, fine portrait of Top Alcohol Funny Car racer Chuck Cheeseman, a four-time national event winner in the 1990s and early 2000s who had the extreme benefit of having a crew chief by the name of Steve Boggs, who this season tuned Sean Bellemeur to their third championship in the last four seasons. 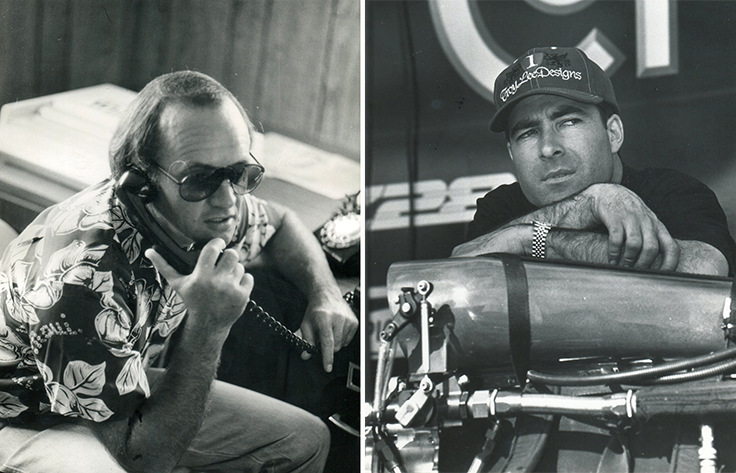 Here's a couple of guys that I’ve been proud to call friends over the years. At left is Richard Tharp, one of the all-time great nitro drivers and personalities, and newly recrowned Funny Car champ Ron Capps. The photo of Tharp was taken by our own Leslie Lovett in the media trailer at the 1983 Springnationals (my first national event road trip), where Tharp was on the phone trying to hustle up some new blowers after a couple of qualifying boomers in the Kilpatrick & Connell digger. Capps was photographed at 1998 preseason testing, where he was about to begin his second season (of what now is 25) in Funny Car at the wheel of Don Prudhomme’s Copenhagen Camaro. 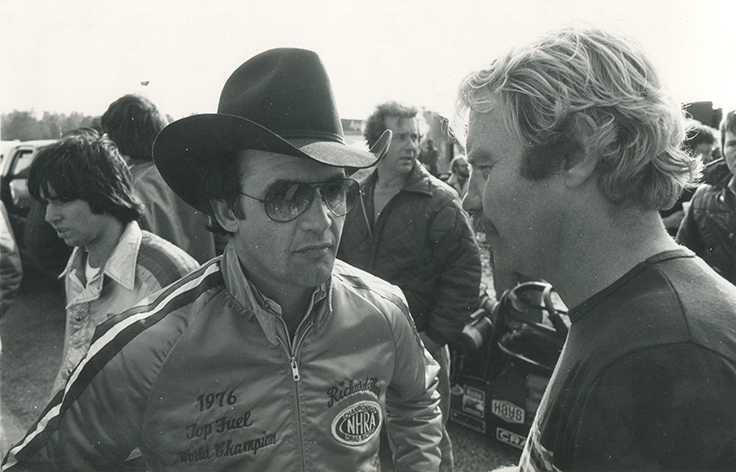 Speaking of “King Richard,” here he is at the 1978 Gatornationals (and still rocking his 1976 world champ jacket) talking to the man who would win that year’s crown, Kelly Brown. It had been more than a decade since Bennie Osborn had become the first two-time Top Fuel champ (1967-68) to won back-to-back Top Fuel titles and would be four more before Shirley Muldowney backed up her 1977 title with another in 1982. (After Carbone, the titles went to Steve Carbone, Ronnie Martin, Gerry Glenn, Jim Walther, Jerry Ruth, Gary Beck, Don Garlits, Tharp, Muldowney, Brown, and Bruins before Shirley won again.) 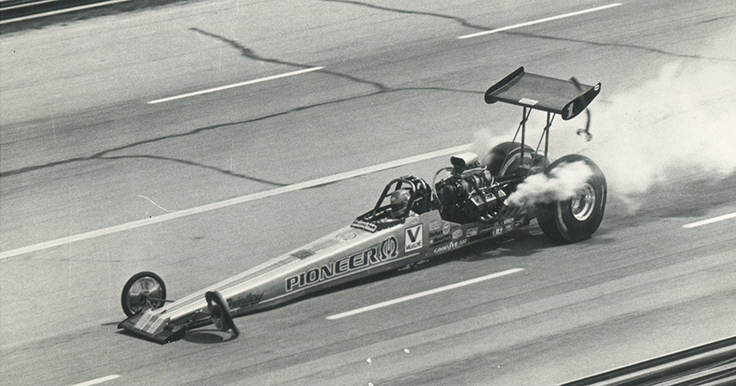 And speaking of Ms. Muldowney, here’s the first worthwhile top-end photo I ever took, shot from the top of the old finish-line tower in Indy, showing Shirley losing the left front tire at the 1983 U.S. Nationals. You can see the inner tube hanging on the rear wing. Little did either of us know that less than a year later another front tire problem would lead to her near-career-ending wreck in Montreal. 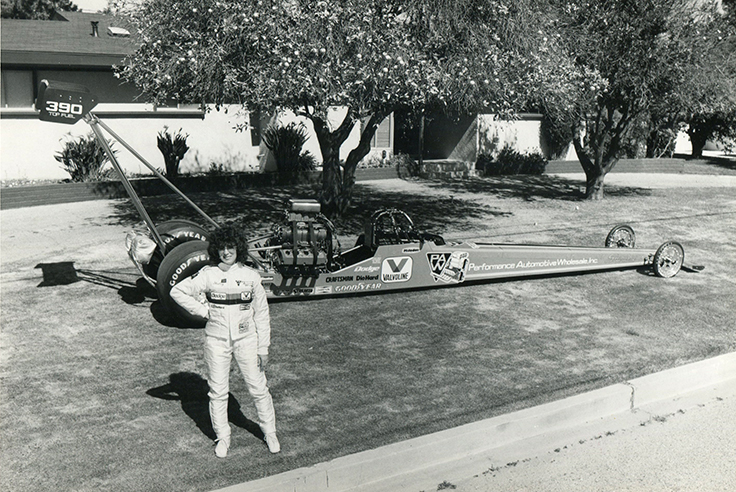 When Muldowney returned to the sport, Lovett was there to photograph her new Performance Automotive Wholesale dragster in front of her home in Northridge, Calif. This house was heavily damaged in the 6.7 magnitude Northridge earthquake in 1994. 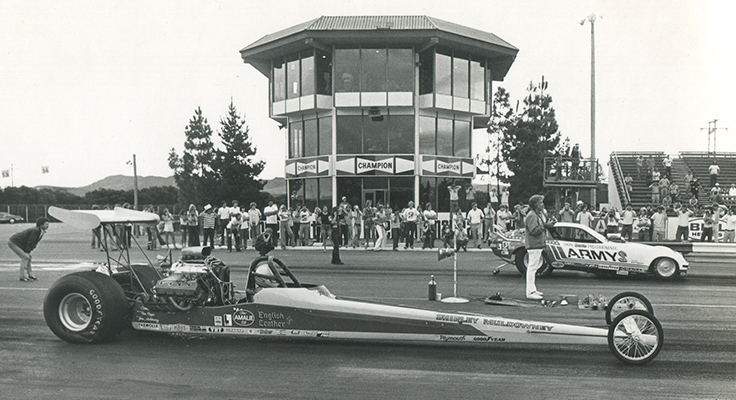 Muldowney was a media darling even before she won her first of three championships in 1977 and took part in three “Challenge of the Sexes” battles between 1976-78, all staged at Orange County Int’l Raceway. She lost this first one (above) against Don Prudhomme, whose all-conquering army Monza got a two-tenths handicap it probably didn’t need, in 1976, then faced off on a more conventional dragster vs. dragster matchups with Don Garlits and Kelly Brown in 1977 and '78. You can read all about the three bizarre matches here.

Speaking of “the Snake,” is this Prudhomme running alongside Leonard Hughes during qualifying at the 1970 Nationals and running the first side-by-side six-second passes? Well, the second half of that question is yes, but the driver of the Hot Wheels ‘Cuda was actually Jay Howell, whom Prudhomme asked to drive his car at that event while he competed in (and famously won in) Top Fuel. You can read the whole story — and a whole lot more about Powell — in this profile I wrote some years ago. 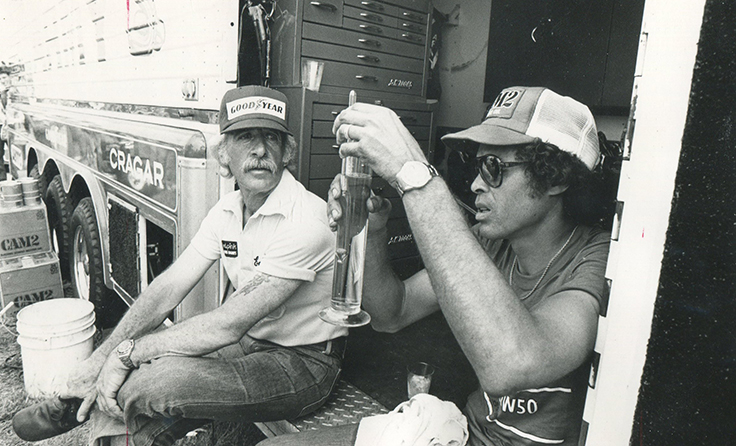 And this most definitely is "the Snake," chatting with engine wizard Ed Pink at the 1977 U.S. Nationals, which Prudhomme also won, this time in Funny Car. 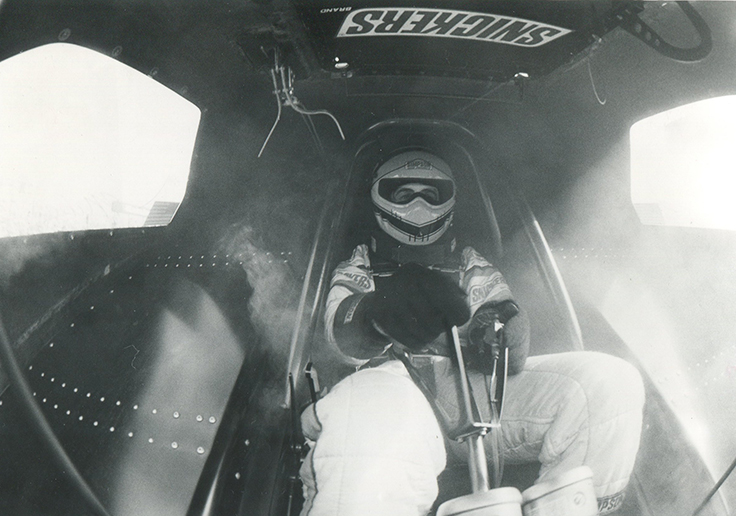 And finally, there’s this gem of Mike Dunn in mid-burnout in Ed Abel’s Snickers-sponsored Funny Car in 1991, when Mike teamed with his famous father,“Big Jim,” to win a handful of national event titles. You have to remember that this was before the heyday of in-car cameras. Lovett mounted a remote-controlled still camera to the dash of the car and fired off a series of pics, then reached in and removed the camera prior to the run. Cool stuff.

OK, thanks for following along. Guess I’d better get these photos filed.