Funny Car rookie Bobby Bode has made hundreds of passes in a long and successful NHRA Jr. Dragster career and even has 25 laps under his safety belts in three events in his newest ride, dad’s Funny Car, but he'll be looking at a four-wide Christmas Tree for the first time this weekend.
16 Apr 2021
Phil Burgess, NHRA National Dragster Editor
Feature

Bobby Bode has made hundreds of passes in a long and successful NHRA Jr. Dragster career, has licensed in Super Comp, wheeled an Alcohol Funny Car at the Frank Hawley Drag Racing School, and even has 25 laps under his safety belts in three events in his newest ride, dad’s nitro-burning Ar-Bee Plastic Bags Funny Car, but even he knows nothing has prepared him for the challenge awaiting in in the first qualifying session where he’ll have to deal with a four-wide Christmas Tree for the first time.

“Jr. Drag Racing gave me a lot of experience staging a car, but it’s nothing like this,” he said. “I know that even some of the most experienced drivers have problems with it, so I just have to make sure I’m paying attention so I don’t mess up myself or anyone else,” he said. “I’ll be in the left lane [Lane 1] for my first pass and that’s easier than being in the middle two lanes, so I’ll be able to get a good look on the first pass.”

With barely over two dozen laps to his credit, every pass is a learning experience for the second-generation racer, and he’s trying to absorb it all. 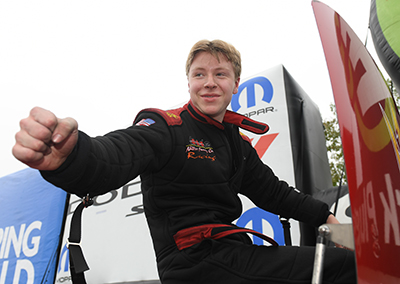 “Everything now just comes waves,” he admitted. “Anything you haven’t seen or experienced just comes at you; you just have to experience it and feel your way through it. I haven’t gotten the chance to pedal the car yet, but I know that’s coming. My confidence level is getting up there; it gets higher after every race”

The Arizona State business major will turn 19 next Friday {April 23] and with the anything-can-happen racing at the four-wides. He’s run as quick as 4.02, just a few ticks off the 3.96 career-best registered by his dad, and with a few breaks could end up in the final quad and maybe even pull off his first career win.

His dad certainly thinks it’s within his reach.

“I drove for 20 years and it’s his turn now,” said his proud father, who may return to the saddle for a few races this year. “It would be bitchin-cool for him to win a Wally at 18; I know that it’s a long shot, but the car is running as good as when I drove it and his lights are way better than mine. With him in the seat we could actually win; with the old guy driving, we were giving up a lot. 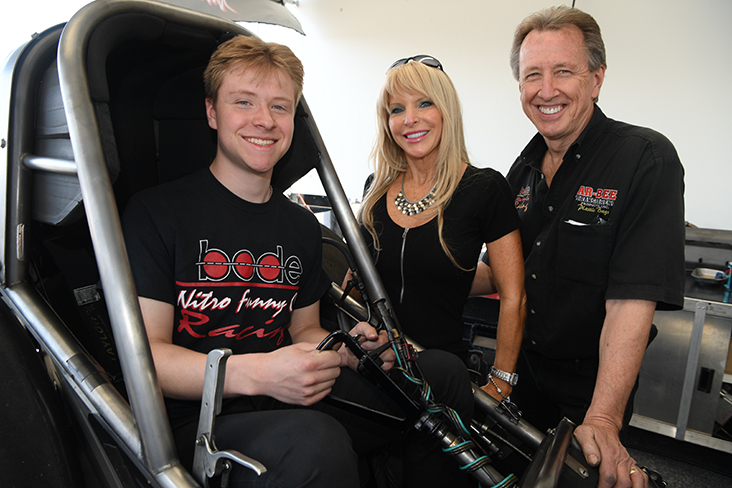 “It’s been exciting to see his progress. Alice and I have dreamed about this his whole life. It’s hard to believe this is the kid I carried around the pits in a basket as a baby and now here he is, and he’s doing a great job. I was sideways the first three years I drove the car; I thought I knew how to drive but didn’t have any idea. He lifts before the car even gets loose. He takes really good care of the car.

“He’s doing good; I think we’ll keep him,” he added with a wink.

The kid will be back in the saddle in Houston, Norwalk, Brainerd, Indy, St. Louis, Vegas, and the season finale in Pomona, though Dad may drive in Brainerd, the event where he scored his breakthrough victory in 2010. With as many as eight events on his schedule, Bode will be a contender for Rookie of the Year honors, where he will battle a number of first-year drivers including Josh Hart, Krista Baldwin, Joe Morrison, Alex Miladinovich, Mike Bucher, Jason Rupert, and Dallas Glenn.

“After Krista didn’t qualify in Gainesville and we did, I thought, ‘Oooh, I’m leading the rookie of the year standings,’ then Josh Hart went out and won Top Fuel, so we’re all chasing him,” said Bode. “I haven’t given it a lot of thought, but I do know it would be pretty cool to win it."