The winner of the Dodge HEMI Challenge takes home the uniquely crafted 42.6-lb. trophy, made from a 426 HEMI cylinder head. All 16 drivers who reach the elimination rounds will receive cash rewards, with the winner earning an extra $15,000 prize.

Hall of Fame NHRA driver Herb “Mr. 4-Speed” McCandless, will serve as the Grand Marshal of the U.S. Nationals and will take on a similar role
During the Dodge Hemi Challenge. McCandless will also lead the field of qualified Darts and Barracudas down the Indianapolis track’s fabled return road in a parade prior to Friday’s eliminations rounds aboard his own original ‘68 Dart Super Stock entry.

Among the participants vying for the iconic custom-made trophy and bragging rights will be driver Bucky Hess II, winner of the inaugural Dodge Hemi Challenge in 2001. 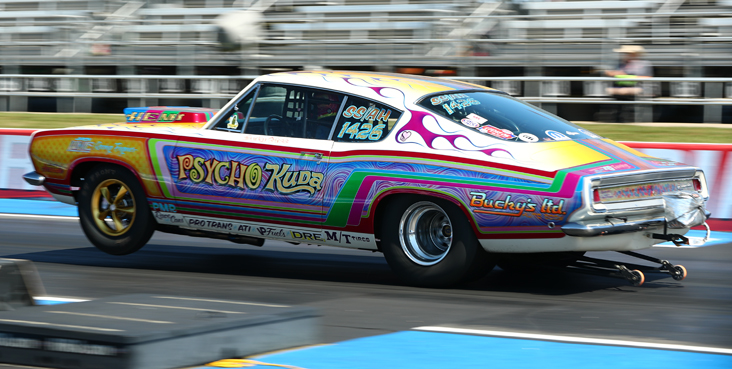 “It was the best Hemi Challenge ever and to be able to share that with my wife [Jeannie] and son [Travis] made it so special,” said Hess. “When we came up the return road at Indy, the stands were full and the whole crowd stood and gave us a standing ovation as we drove by in my Hemi Barracuda. It looked like the wave at a football game. They [NHRA] were running a Pro Stock qualifying session and they stopped them to let us drive through to the front of the tower. Like they say, the first is the one they will always remember, and I’ll never forget that evening at the 2001 NHRA U.S. Nationals.”

Jimmy Daniels Jr. returns in his’68 Dart as a four-time winner (2016-2019) after seeing his record four-year, 19-round consecutive win streak come to an end last year with a surprising round one loss.

“The success that we have had in this race feels like you’re on cloud nine,” said the 25-year-old Daniels, who remains a favorite as a front runner at this year’s event. “Having the opportunity to win one Hemi Challenge is an absolute dream come true, but being able to win four consecutive events was out of this world. This is a race we prepare for all year so when you are victorious at the end of the day, it's all a big dream come true.

“The competition is definitely going to be tough at this year's event,” added Daniels. “You are going to have a handful of cars that are more than capable of winning the event. You can't take any of these guys lightly as they are all gunning for that awesome Hemi cylinder head trophy and the $15,000 check. This is the one race we put a ton of time and resources into each and every year and it is by far one of my greatest achievements in my racing career.”

A new winner was crowned last year when South Carolina’s Stephen Yantus III drove a ’68 Barracuda from the No. 1 qualifier position through eliminations, where he set the low elapsed time and top speed of the event with an 8.410-second, 158.65-mph run to earn the victory. 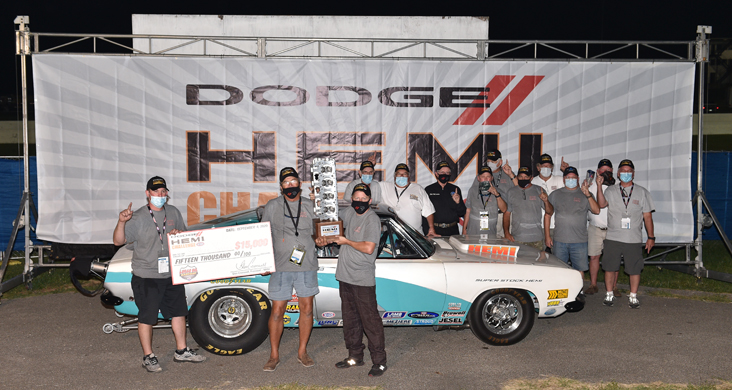 “The 2020 event was the fourth time we ran at the Hemi Challenge and the first three times didn't treat us very well,” said Yantus. “We started off very green and had to learn a bunch as quick as we could learn it. These elephants [426 Hemi engines] are very difficult to understand and master how to best get them down the track. Not too many people were stepping up to the plate to help us. This class is very competitive, and secrets stay secrets. You have to earn your stripes and take your licks in the SS/AH class. But there isn't another class out there like it. Racing these iconic package cars has always been my dream and they’re amazing to watch.”

The Dodge HEMI Challenge will be streamed online via NHRA.TV with subscription-based video-on-demand coverage of live qualifying and elimination rounds at Lucas Oil Raceway on Sept. 3. The final elimination round of the Dodge Hemi Challenge, as well as highlights from the pre-race parade will be broadcast on FS1 during the qualifying show on Friday, Sept. 3 from 7-9 p.m. Eastern. Fans can also look for Hemi Challenge highlights during the NHRA coverage of the Dodge//SRT U.S. Nationals on Sunday Sept. 5, on FS1 from 11 a.m.- 1 p.m. and then on the FOX national broadcast network from 1 - 4 p.m. EDT.