The Architecture of a Title

The key to winning an NHRA Lucas Oil world championship is about much more than turning on enough win lights. Beyond logistical considerations, every racer also has some level of strategy behind the architecture of a title season.
23 Mar 2021
Luke Bogacki
Feature

As we embark on another year of NHRA Lucas Oil Drag Racing Series competition, racers from across the continent undoubtedly have their calendars open and have begun penciling in potential race dates and planning the upcoming season.

While the demands of a serious run at a Lucas Oil Series title pale in comparison to the logistical complexities that the Professional teams in the NHRA Camping World Drag Racing Series face, the fact remains that, for most of us, attending the minimum three national events and five Lucas Oil Series events requires a serious commitment. And that’s the bare minimum.

In the Lucas Oil categories, national points typically consist of a racer’s best three national events out of the first six attended; combined with that racer’s best five divisional events out of the first eight events attended. So, while in theory a championship could be won by attending just eight events, in reality, most champions earn their crown by attending the full quota of 14. There are exceptions: Hugh Meeks III won the 2005 Super Stock championship with a massive 687 tally despite attending just three national events (he won two of them). For the most part, however, history indicates that a serious run at a world championship typically requires a commitment to the full 14-event schedule (or close to it).

As we begin mapping out a season, we cannot possibly predict the level of success necessary to win a national title in our chosen category. In 2011, Jody Lang amassed 699 points – which equates to essentially averaging nearly a seventh-round loss across eight events! In that season, he finished 2nd (it’s the highest points total to ever not win a championship). In contrast, last season Brian Preszler posted a 539-point total – essentially 16 fewer win lights than Lang’s total – and won the Super Gas title. While the height of the bar often varies significantly, we can understand that in order to make a real effort at a title, we’re best served as racers to give ourselves every possible opportunity to succeed.

The issue, for many, becomes geography. Regardless of where you call home, attending 14 NHRA events is going to necessitate some travel and planning. In certain areas of the country, this requires clearing more logistical hurdles than in others.

Lang, now the reigning Stock eliminator champion, has made dozens of championship runs from the geographic obscurity of Washington state. Nearly half of his regular points-earning events are more than 1,000 miles from his home.

“When working a full-time job, it’s all about logistics,” he said. “One thing [that helps me on the longer trips] is driving my stuff down a week or two early, on a weekend. This saves days off from work. It obviously entails flights back and forth, but saving a day here or there can be the difference in having enough time off to attend a few more races down the road.”

Five-time world champion Justin Lamb reiterated this point: “For me, especially on the West Coast, it’s really about what’s logistically possible. Given the travel involved, I look for ways to incorporate multiple events in one trip. I’ll fly back and forth for work, but it’s not uncommon for my rig to stay away from home for a month at a time.” 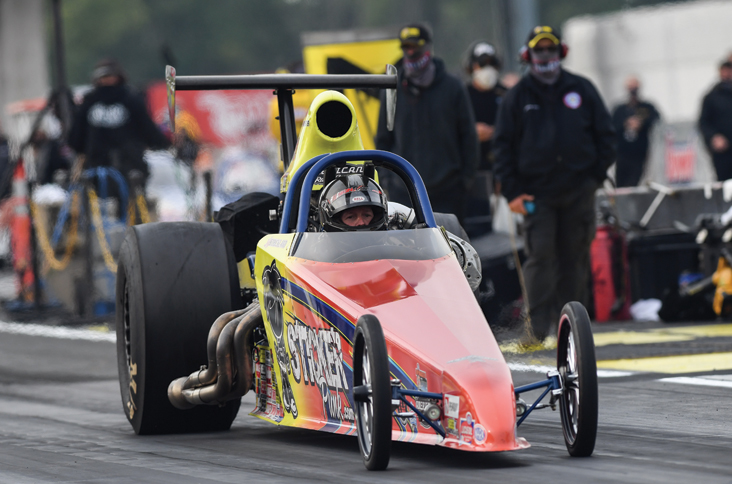 Although two-time champion Jeff Strickland is based in western Alabama and doesn’t often have the same massive travel concerns, he detailed a similar strategy: “My goals are to avoid tracks I’ve had little success at,” he said with a laugh. “After that, I try to coordinate so my rig doesn’t make dead-head [one-race] trips. For instance, my rig leaves for Adel [South Georgi Motorsports Park] and won’t be home for five weeks.”

When committing to the pursuit of a title, it can certainly be beneficial to plan things out in advance. In doing so, it’s important to consider maximum impact for our travel time and expense. While the focus of this column is the ultimate goal of a world championship, it’s typically worthwhile to ensure that our schedule is also conducive to a divisional championship, as well as a berth in bonus events like the JEGS Allstars. These are incredible (and relatively lucrative) achievements in their own right, and the points structure is somewhat independent.

For example, a racer’s national points total constitutes of their best three national event finishes, plus their best five divisional events from the first eight attended – regardless of where those divisional events are. In theory, a racer could win a world championship by claiming an event from five different geographic divisions. In contrast, to win a division championship, racers still earn points at their best five events, but three of those five must come from the division in which they pursue a championship. There are separate points-earning protocols for bonus events as well. If it sounds confusing, I’ll admit that at times it can be. It’s very important to familiarize yourself with the points-earning rules for each series and program (they’re detailed in the NHRA Rulebook).

Beyond logistical considerations, every racer also has some level of strategy behind the architecture of a title season. One such example comes again from five-time champion Lamb: “This opposes what I said about logistics and travel to a degree, but I’m not a fan of double divisional events. While they’re cost-effective, the second leg of the event minimizes some of my perceived strengths. [In race two] everyone has a ton of data, so it tends to become more of a practice Tree race and less about strategy and experience, as opposed to traditional events where more variables are often present.”

While detailing a plan is the first step, flexibility in scheduling is crucial. Things happen – and often, whether it’s our decision or not, we’re unable to attend an event or events that we initially intended to. Each of the champions I spoke with emphasized the need to schedule (and, when necessary, to alter that schedule) with a path to the title in mind. 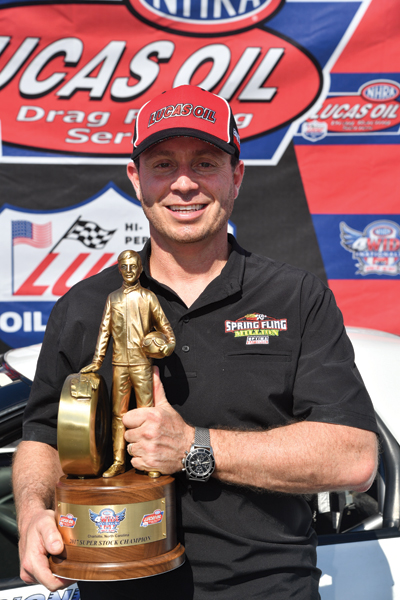 Peter Biondo, the most illustrious champion in Sportsman drag racing history with seven world championship Wallys to his credit, emphasized that point:

“When I set out to chase an NHRA world championship, my preliminary schedule was never rigid,” he admitted. “It was important to me to adjust my schedule by going with my gut as the season progressed. I could get a better feel on where to go as the season played out. I would break the season down into quarters. Relating it to poker; you don’t know what your best play is until after the flop.”

He continued, “I would draw up a season schedule based out of both travel convenience and events that play to my strengths. There were always certain tracks or times of the year I seemed to have more success at. For me, it was late in the year at tracks like Indy, Reading, and Vegas.”