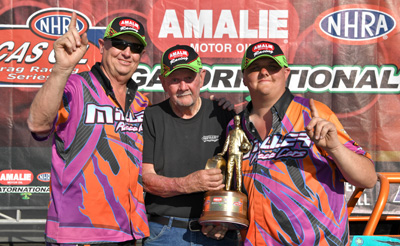 For more than a decade, Ray Miller III has been labeled as “the next big thing” in the world of NHRA super-class racing. After delivering multiple national and divisional wins and a handful of top ten finishes, Miller, 29, finally delivered last year when he was crowned the 2019 NHRA Lucas Oil Super Comp champion. For good measure, he also finished No. 4 in Super Gas, missing out on a second title by just 63-points.

At a time when he should have been celebrating his long-awaited championship, and preparing for his 2020 title defense, Miller III was instead fighting for his life.

“A couple of weeks after we got home from the banquet in California, I got sick,” said Miller. “Actually, my mom got sick first and the in January, right before the Division 2 banquet, I got sick and we ended up going to the hospital. They told me I had the early stages of pneumonia, so they put a small tube in me and drained some fluids from my lungs. I was in the hospital for five days but after I got out, we went to the D2 banquet. I felt better at first and then got sick again. I just got worse and we went back to the hospital.

“This time I had severe pneumonia and had to have surgery to remove it. They went in for a four-hour surgery and removed fluid and scar tissue. After the operation, I wasn’t getting better right away so they brought in a specialist to look at me. He ordered a change in my meds and I started to get better right away. Still, I was in the hospital for 17 days this time.”

Once he was discharged from the hospital, Miller was anxious to begin his title defense, but also took a cautious approach to his return. He’s already missed the season-opening Division 2 Lucas Oil Series event in Orlando and debated attending the second event at South Georgia Motorsports Park. Ultimately, he decided to skip it to focus on his recovery and work on projects at the family business, Miller Race Cars.

“I was released from the hospital about a week before the South Georgia race and we talked about going, but decided to skip it,” Miller said. “To be honest, at that point I could barely get in and out of the car. From the surgery, I have about a ten-inch scar on my right side and I was still in a lot of pain. My doctor didn’t tell me that I couldn’t race, but he did say a full recovery might take three or four months. I thought it was best not to go. It just sucked because I was leading the JEGS Allstar points and just needed to go to that race but there are bigger things than that.”

A couple weeks later, with the Gainesville double-header looming, Miller and his father, Ray Jr., decided to make the trip south. First, they raced in the Baby Gators, the massive Division 2 Lucas Oil Series race and then stuck around for the Amalie Motor Oil Gatornationals. Although the event was disrupted by the Covid-19 virus, Miller was able to earn a gratifying win in Super Comp.

“I felt a lot better before we left for Gainesville,” Miller said. “I could get in and out of the car with no problem really, I felt like I was 100-percent. We sort of used the Baby Gators as a test. We had engines out to be freshened and my dad got the cars ready while I was sick, but we had no time to test. My cars were good but I just didn’t get the job done. I missed the tree in one car and boneheaded the finish line in the other. I was pretty down but my dad said, ‘You’re gonna be fine.’”

In the six rounds it took to win the Gatornationals, Miller was just about unstoppable. His worst reaction time of the day was a .016 and his judgement at the finish line was exceptional. Miller’s best performance came in the semifinals where he delivered a “.005-pack” against Troy Williams Jr. with a .000 light and an 8.905. He closed the deal with a similar run in the final against Epping champ Ken Moses. 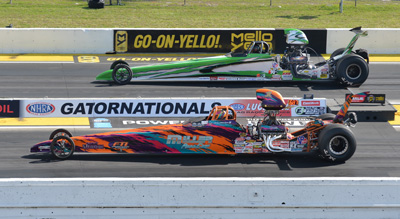 “I felt good and I was hitting the tree and it all came together,” Miller said. “I lost a close race in Super Gas, but Super Comp was much better. The race against Troy was definitely the toughest. I was .007 the round before and took some [delay] out. My dad convinced me to put a little back in and I was perfect. That’s the only way to beat someone like Troy; you have to give him no room. I also did what I wanted in the final and that was also tough because he’s got a fast car. I didn’t’ want to get too far behind.

“For me, it was nice just to get one out of the way early. I also really wanted to win the Gators. I grew up there watching my dad race and that’s one race that has eluded me. I’ve come close a few times, but it was great to finally get it. They always say that having the No. 1 on your car makes you a target. My dad says that’s just in your head but it’s hard not to think about it. I just wanted to keep going after all the success we had last year. No, I don’t feel any pressure the rest of the year.”

Miller’s pursuit of a second title is put on hold, at least temporarily, by the Covid-19 virus but he’s making good use of the downtime by working to finish customer cars at Miller Race Cars.

“I was sick for so long that we got behind by a lot, so this gives us a chance to catch-up,” he said. “I’d rather be out there racing but we’re making the best of it. I owe a lot of thanks to my parents, [Ray Jr. and Christine], to my girlfriend Jamie Southards and everyone else who supported me and came to see me in the hospital. I also need to thank all the companies who stick with us, Miller Race Cars, Penske Shocks, FTI Converters, Stinnett Carburetors, Oakley Motorsports, Mickey Thompson Tires, Strange Engineering, Aeromotive Fuel Systems, and K&R Performance.