Drivers in the Mello Yello Drag Racing Series have spent months on the sidelines leading up to this weekend’s Return to Racing at the E3 Spark Plugs NHRA Nationals in Indianapolis, but many of them quickly adopted regimens and game plans to keep them race-ready.
07 Jul 2020
Phil Burgess, NHRA National Dragster Editor
Feature

Drivers in the Mello Yello Drag Racing Series have spent months on the sidelines leading up to this weekend’s Return to Racing at the E3 Spark Plugs NHRA Nationals in Indianapolis, but many of them quickly adopted regimens and game plans to keep them race-ready.

Here’s a look at some of their preparations: 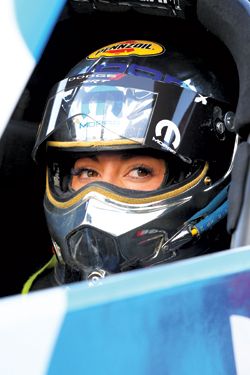 “I have given it an enormous amount of thought,” said Leah Pruett, who races in both Top Fuel and the Factory Stock Showdown, doubling her preparation. “I have a lot of video, and I watch it every day, every week, both my in-cars and out-cars. There’s not a day that goes by that I don’t do this.

“Some people meditate. I meditate with the routine of both cars. I even pretend that I’m feeling the same things. I envision what it’s going to be like to get in that car and strap in, be with my guys, and pick up right where we left off. For me, it’s everything from trimming the fuel to the new procedure we have with the burnout, the speed of backing up that’s higher than we’ve ever had before – I go over and over even the small, tiniest, mundane things so that I haven’t skipped a beat when I get in that car.

“I’m trying to over-condition mentally and be sensitive to the car – when to click or pedal the car –- and what that feels each time; when the tires grow and smoke and the different pedal jobs, and that’s all mental. Every day I’m thinking about past runs and looking at videos and just trying to simulate all of the scenarios as much as possible so that nothing catches me off guard. I feel like that’ll help me put myself into a professional racecar driver’s position, and my team deserves that.

While Pruett and others are visualizing racing or maybe even doing some circle-track iRacing simulations, former Top Fuel champ Shawn Langdon is actually going down the track in his bracket dragsters.

“I’ve always kind of been the guy that stays active,” he said. “I’ve been doing a little bit of iRacing -– not a whole lot of that correlates over but still keeping the competitive mindset, the competitive spirit –- but the real key for me is bracket racing my dragsters and staying fresh on the Tree. I’ve also been doing some practice Tree tournaments, so I feel like, mentally, I’m ready to go right now.

“Although it’s not the same as driving my Top Fuel dragster, you can take different things out of every car you drive. Just being able to take your mindset of going on the starting line, to be able to look at the Tree and hit the Tree and understand where your reaction times are, and if you’re being consistent on everything from your burnout to staging –- it all helps. All of those things correlate.”

2018 Mello Yello Funny Car champ J.R. Todd has also been doing some iRacing and practice Tree competitions, but with restrictions being lifted somewhat in Indiana, he was especially pleased to get back into the PitFit gym, which specializes on exercise that most benefit racecar drivers.

“The things I do there are more beneficial for me then the practice Tree,” he explained. “Practicing on the Tree can only do so much for you; you’ve got to get back in the car more than anything. What I do at the gym is get my heart rate way up and then do eye-hand coordination things; to me, that’s more like being in the race car.”

Many drivers admit that their first run of any new season - usually in pre-season testing in Las Vegas or Phoenix –- is an eye-opener and reminds them just how quick and fast these cars are; now imagine that with twice as long a break than they’re used to between seasons. 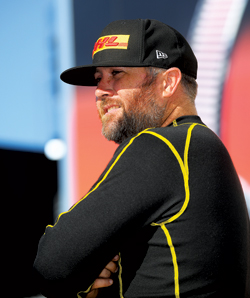 “It’s going to be a little bit different for us; typically our offseason is two months long and every time you go back in testing and hit the gas, it opens your eyes for the first couple of runs because you have to get used to it again,” Langdon agreed. “So now we’ve had four months off, it’s going to be the longest that a majority of the racers have had to endure out of the race car.

“Back in 2017, I didn’t start until Houston in April with Kalitta because I missed the first four races when I was with Don Schumacher and didn’t have any funding, so that was 5 1/2 months. By Charlotte, we had a good race, but it definitely took me a couple of runs to catch my mind up with everything. I think we’re all going to be in the same boat, but I’m hoping that with what I’ve been doing with iRacing and bracket racing will give me a little bit of a competitive edge when we get going again.”

“The first run in Vegas this year at testing I was out of breath because you’re not used to being strapped into that tight and now you can multiply that for this occasion,” predicted Tommy Johnson Jr.

“That first time back in the seat after the offseason, that first pass completely baffles your mind at how quick something can move and how it moves you back in your seat,” said Ron Capps. “It’s just crazy. I do think that you’re going to see a lot of smiles though at the top end after that first pass. It’s going to be like the very first round of qualifying at every four-wide race; at the other end of the track, it’s hilarious because every driver gets out and you see smiles you haven’t seen at any race up until that one because everyone is laughing about how they messed up.

“I think it’s going to be crazy the first time the drivers get to step on the gas; if someone tells you, ‘It’s no big deal,’ they’re full of crap.”

Beyond her mental training, Pruett has also been ramping up her physiological engine.

“I’ve also been doing a lot of off-roading with Ken Block in a CanAm at a place called Swing Arm City in Kanesville, Utah,” he said. “You go as high as you can, and at the top is a drop of hundreds of feet down a cliff, so you whip the CanAm, like the swing of an arm, and see who can get the closest to the top. It’s so awesome and allows me to bring myself to an adrenaline experience that, while it can’t rival what we do on the racetrack, you definitely get those adrenaline glands pumping so that you’re still conditioned for that, and the only way I’ve been able to get close to that has been driving the CanAm in sketchy, sketchy places.”

Getting back to a routine

Drivers and crew chiefs, like all of us, are creatures of habit, and being away from the track and the practices and procedures that are day-in and day-out routines could make for some interesting moments after a four-month layoff.

“Every time we go to do the first warmup at pre-season testing, everyone is out of sync – the crew chief forgets what he usually does and the driver forgets what they do and in what order,” said Capps. “When you shut off the car everyone looks at one another and just laughs.”

With all but the Denso Spark Plugs NHRA U.S. Nationals trimmed to just two qualifying sessions on Saturday, drivers and crew chiefs will have to modify their plans and thought processes. 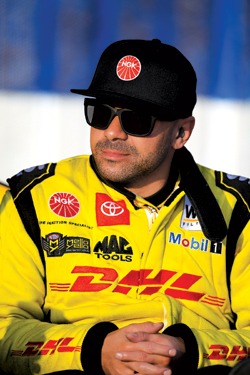 “Four runs in qualifying allows for a hiccup here and there, but I’d say with the shortened events that doesn’t allow for that now,” said Todd. “You get one crack in each lane and you’ll probably see guys being a little more conservative in qualifying just to make sure they get down the track.

“I can see drivers pedaling on qualifying runs just to get lane choice that might become a factor or if weather is coming in and we only get one qualifying run. There are a lot of different variables, and you’re definitely going to see a lot more desperation runs out there.”

Reigning Top Fuel champ Steve Torrence isn’t stressing much about any of that. “It could go either way but everybody’s at the same advantage or disadvantage and I think I may look forward to it more to get back into the car and just be a little more excited,” he said. “This changes the whole plan; you’ve got to come out and swing for every one of ’em; there’s no relax time. You’re going to have to get on your game pretty quick.”

Running 17 events in 19 weeks is going to be a Herculean task for everyone involved, but especially the teams who not only have to get the rigs up and down the road but also maintain and repair their equipment for weeks at a time before they can check back into their shops.

“It’s totally unprecedented,” said Jack Beckman. “I know people say, ‘Well NASCAR does it at all the time,’ but remember, they have a transportation crew, a qualifying crew, and a raceday crew; our crew is nine MacGyvers -– they do everything –- so I think the potential physical and mental stress on the crew members and crew chiefs is going to be inordinate.”

Alexis DeJoria agrees. “It’s good for the drivers but, my God, the poor guys on the crew are going to feel like whipped horses,” she lamented.

And woe be it to any team that runs into large-scale mechanical difficulties along the way, especially Funny Car teams who can only carry two bodies in their team haulers.

“If you have any kind of issues on this on this stretch, it’s going to be tough,” assessed Tommy Johnson Jr. “For example, take last year when we blew up two bodies in Phoenix and one in Gainesville. At least we had a week or two break in there. This time, while I’m pretty sure that while we would make it to the next race, it might be a different-colored body. If anybody has any kind of issues, it’s gonna be brutal for them.”