Steve Torrence’s 2019 Top Fuel championship season didn’t end the way he hoped it would — with the fans cheering for him as he raised the championship trophy for the second straight year; quite the opposite actually transpired — but pretty much everything that happened before Championship Sunday in Pomona left the talented Texan with a lot to smile about.

If not for some bad luck in 2017, where a crash three races from season’s end derailed the team’s momentum, he could very well own three straight championships. Over the span of the last three seasons, he has won 28 races — four times as many as anyone else — and the heat of battle has forged the Capco team into a juggernaut, especially when it comes to the Countdown to the Championship playoffs and the pressure of the season finale. 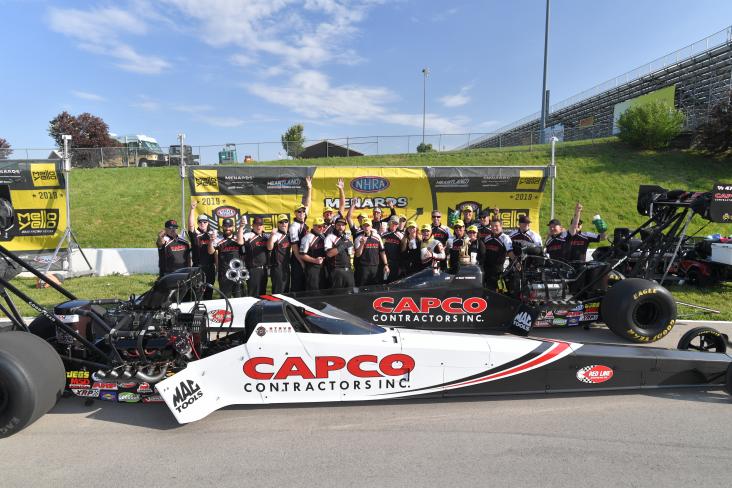 “Everything that has happened the last three seasons has taught us about the preparedness and the stability to deal with the pressure and keep moving,” Torrence reflected. “I’ve been on every side of it. I’ve been on the side where you go to [the Finals] and screw it up and lose like I did in 2017 [with a late light in the opening round]. And then last year, where even though we’d already wrapped up the championship, we were trying to remain perfect with wins in all six Countdown races. Ultimately, it’s made me a better racer, maybe a more fierce competitor.”

The tenacity of the Texan was tested at several points throughout the year, starting with the season opener. The team rode into 2019 on a 24 round-win streak after that perfect Countdown and had its eyes on Tony Schumacher’s record 31 winning streak. Torrence’s skein reached 27 before smoking the tires in the final round of the Winternationals against one of his toughest season rivals, Doug Kalitta.

“I dreaded going to the Winternationals because you still have the same expectation to perform, but you’ve been off for two months,” he said. “We had gone down the track every lap and then got greedy in the final and knocked the tires off, but it was probably a little bit of relief because if [the streak] continues, that’s all everybody wants to talk about. We needed to focus on racing.” 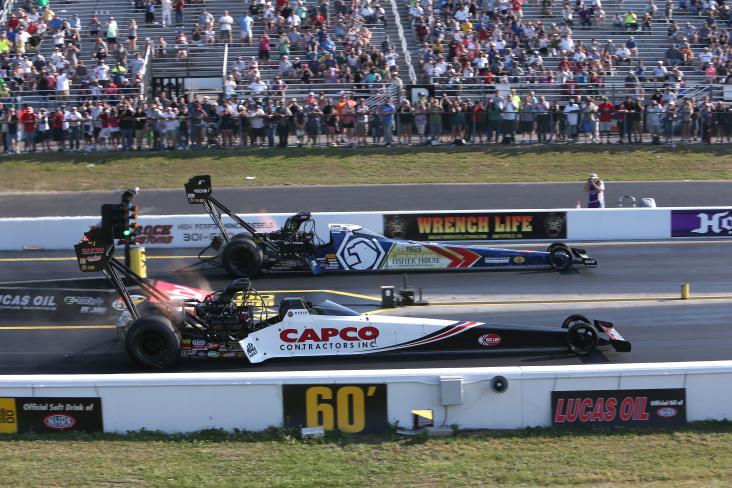 The Capco team didn’t win at any of the next four races — a normal occurrence for most teams, a slump for the Torrences — but there was method to their madness.

“We really started working on our cool-weather tune-up,” he said. “At the beginning and end of the season is the time of year that you need to be able to throw down, and we started trying to learn how to go [3.]65 because we didn’t know how to do it like ‘Grubby’ [David Grubnic, Brittany Force’s crew chief] does.

“When it’s not the best conditions, Richard and Bobby can go down a wet street, which gives me confidence, especially in the summertime, but maybe what Grubnic has done is better for the Countdown format because he can run really good in the first of the year and at the end of the year. The middle of the year is when we do really well, but that’s not the time that counts for the championship.”

By the time the tour reached the NGK NHRA Four-Wide Nationals in Charlotte, testing time was over, and they got back to the business of winning. And how.

They won the next five races — Charlotte, Atlanta, Richmond, Chicago, and Topeka — then were runners-up in Bristol behind Mike Salinas, then they won another three straight — Norwalk, Epping, Denver — to go 34-1 over that span. Had a broken crankshaft not cost them that Bristol final, snapping their winning streak at 22 rounds, they would have tied Schumacher’s 31-round streak in the Epping final. 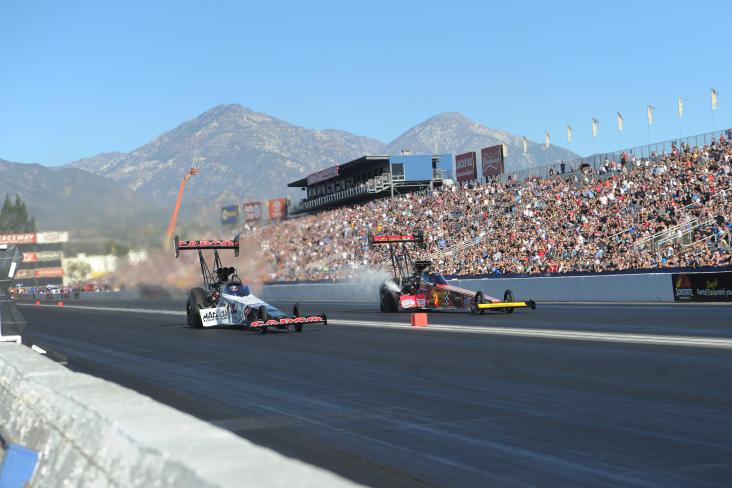 “I remember that final round of Bristol so clearly,” he said. “I left on him by a bunch, and then the motor shuts off. You get a streak going like that, you take pride in being in a situation where you get to put your name in the record books, so it was kind of a letdown.”

The team entered the six-race Countdown as the No. 1 seed and had the bonus of having Torrence patriarch Billy also qualify for the playoffs and ultimately play a major role in his son’s championship, but any hopes of duplicating 2018’s “perfect Countdown” were dashed in round one of the opening playoff race, where Clay Millican shockingly defeated Torrence on a holeshot in Reading.

“If I told you I wasn’t thinking about being perfect again, I’d be lying,” he admitted. “You put pressure on yourself coming into the Countdown because everything up to that point was just practice, and now we’ve got 25% of our season to decide the champion; there’s no room for mistakes, there’s no room for errors.

“There’s always gonna be an opportunity to screw up and beat yourself up about it, but my team knows that. No matter what happens, they’re going to say, ‘Don’t worry about it, we just got beat, so let’s go on to the next one.’ We didn’t get to where we’re at by worrying about what happened; let’s just keep moving forward.”

Torrence rebounded by reaching the final round of the next event in St. Louis, where he was runner-up to his father in a telling moment.

“If anyone had any concerns that Billy would lay down for me, that definitely showed we don’t play any games because we really could have used that round-win,” he said.

The St. Louis runner-up did give back the points lead he lost in Reading, and he added to that with his ninth win of the season, in Charlotte, then got surprisingly knocked off in round one in Dallas by Shawn Reed. Force was emerging as his greatest points threat at the time, but Billy defeated her in the semi’s to limit the damage.

Force kept it close with a clutch win in Las Vegas, beating Torrence in the final round to make the Finals a real shootout with both drivers separated by less than a round and Kalitta just a few paces back.

“It’s like, ‘OK, whoever goes the furthest wins,’ and I didn’t want to succumb to the pressure like I did in 2017. I told myself, ‘Stay focused, stay in the game, get your head together — don’t lose it, you’ve been here before.”

But Torrence didn’t heed his own advice. He beat Cameron Ferre in round one but took offense to Ferre’s deep-staging tactic, and after a heated verbal exchange at the top end, he shoved Ferre in the face on national TV.

Even before boos rained down on him on the return road, he realized he’d made a terrible mistake.

“I screwed up. I admit it; I own it,” he said. “I’m not justifying any of it, but when you’re in that situation, and you’re in the moment, it’s tense. Whether you’ve already won the championship, trying to go perfect, whether you’re behind trying to get there or ahead trying to stay there, there’s just a lot of pressure.

“I apologized everywhere I possibly can, especially to Cameron. I just let the pressure get to me when my main focus was, ‘Dude, do your job,’ but maybe, in some kind of weird way, it took some of the focus off of the stress and the pressure. No one thinks clearly when they’re mad or distracted, so I went into the trailer and prayed to clear my mind. I had to say, ‘Hey, get your head right and go drive the car. This is the round for the whole year.’”

That round was against Force, whom he beat going away after her engine went sour, to claim the championship.

Torrence then lost to Richie Crampton in the semifinals, who in turn lost to Kalitta in the final, leaving Kalitta just three tantalizing points behind Torrence in the final tally.

“I can assure you that I’m not sure my name belongs with those guys,” he said humbly. “They were my heroes. “I’m the first to say it’s not me, because, more often than not, if I go up there and remotely do my job and drive the car straight and just be consistent, my guys are going give me the race car to win. It’s a team effort, but it’s more team than driver.”