Robert Hight looked unbeatable to start the 2019 season. He won two of the first three races and claimed pole at all three. The Jimmy Prock-tuned Auto Club Chevy Camaro boasted 330 of a possible 390 points and 10 of 12 possible round-wins. A first-round loss in Las Vegas was the only stumbling block Hight met to start the season as he won four of the first five races and built an insurmountable lead.

Greatness remains difficult to fully grasp when it lies in front of us and perhaps more difficult still when it blasts by at 330 mph. Hight and Prock teamed up to win six races, reach nine final rounds, and win a staggering 50 rounds — five more than when he won the title in 2017. He surpassed the 50-win mark, becoming just the third to do so, and moved within 12 of Ron Capps and 100 of John Force in Funny Car.

Hight is also No. 19 in wins all time and one of just 20 racers, Sportsman or otherwise, to boast 50 or more victories. He and fellow champion Erica Enders both joined the three-time world champions club at the Auto Club NHRA Finals, a group almost as exclusive as the one that requires a 50-Wally admission charge. 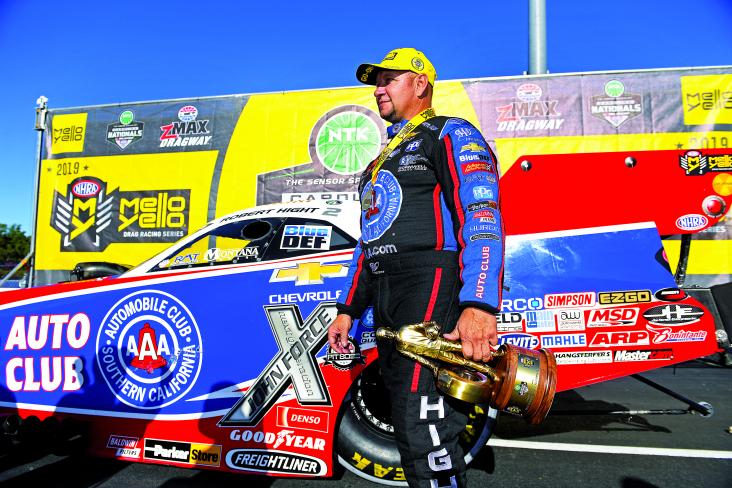 “When I got 50 in Sonoma, it’s like, how did I get 50 wins? It just doesn’t seem possible. There are only four guys that can say they won more than two championships in a Funny Car: that’s John Force, Kenny Bernstein, Raymond Beadle, and Don Prudhomme. How is it even possible that my name is included with those four other guys? It’s surreal.”

Hight always appeared to have the best car, though the Auto Club team looked a bit off the pace leading into the NHRA Countdown to the Championship. Hight won in Sonoma while running the fastest speed of the 2019 season to that point but failed to exit the second round in the four races that followed, including the Countdown opener in Reading. 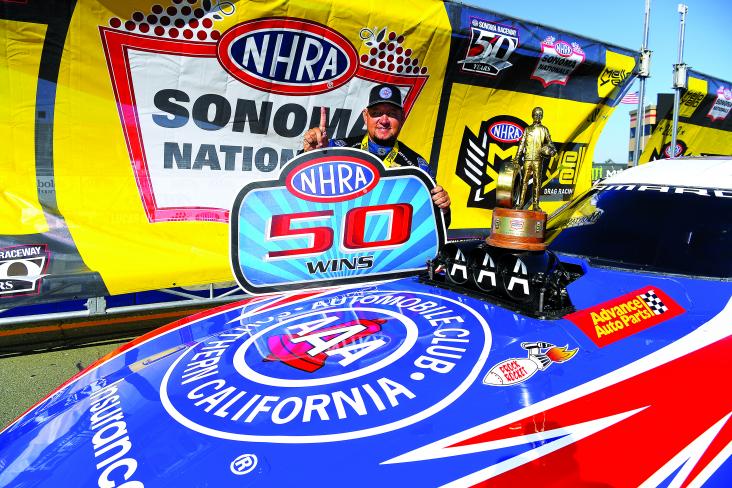 That moved his team into third place for the first and only time all season. He regained control of the Funny Car category in St. Louis despite a semifinal defeat to 2018 Funny Car world champion J.R. Todd and never looked back. Hight won the next race, the NTK NHRA Carolina Nationals, and held onto the catbird seat despite failing to reach another final until the last race of the season.

The Auto Club team appeared most threatened at its home track in Pomona. Matt Hagan and Dickie Venables, the biggest rivals of Hight and Prock, put on a late-season surge by winning in Dallas and Las Vegas and earning pole position at Auto Club Raceway at Pomona. Hight struggled during the first three sessions of qualifying before making a great lap in the final qualifying heat.

He led Hagan by 56 points entering race day and Jack Beckman by 46; a win in the semifinals against Hagan would all but clinch his title. It was not a close race. Hight grabbed more than three-hundredths on the Tree and outran him on the track for good measure, sending him to his ninth final of the season and needing only a mistake-free run to lock up a third title. 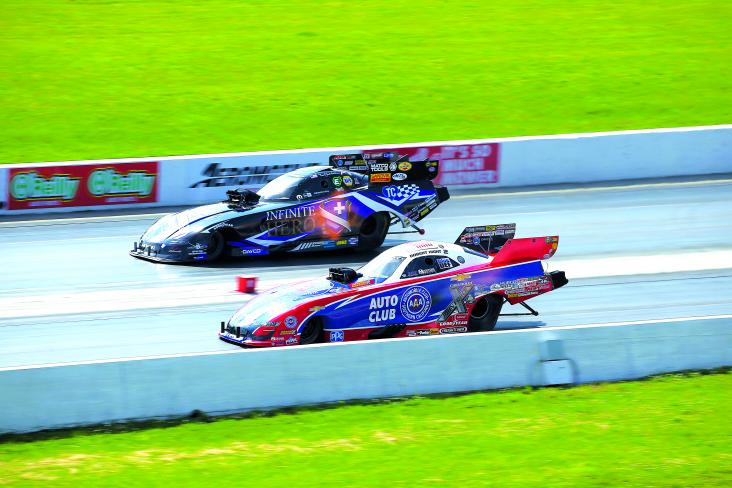 “I wanted to do a big ol’ burnout for the fans; it’s something you dream about, and we don’t get to do them anymore because of how finicky these cars are,” he said. “I also was hoping that we could back up and make a great run and show the crew chiefs that long burnouts don’t hurt anything, and we could go back to doing them because the fans love them.

“I used up so much fuel doing that, and between that and me stopping so fast and starting to back up, the fuel ran to the front of the tank and the pump couldn’t pick it up,” he said. “I heard it start to rev up as it was leaning out. Usually it will run a while before it shuts off but this time it didn’t; it just signed off.”

So, the burnout didn’t exactly go without a hitch, but Hight scrambled out of his Camaro and up to the top end to receive his championship jacket and further cement himself as one of the greatest Funny Car drivers of all time. That’s the company he keeps after bringing another world championship back to John Force Racing, its third in the last three years.

Hight leads all Funny Car drivers with 37 wins during the 2010s, though he’s followed closely by Capps (34) and Hagan (33). He’s also tied with Hagan and Force for championships in the closing decade, and he scored the last championship of the previous decade, during which he earned the first 17 Wallys of his career. The former crewmember worked his way up to be the leader of a category that is not easily tamed.

Force’s record 151 (and counting) victories is considered an untouchable record, Wallys accumulated almost entirely before Hight ever got his Funny Car license. But what he and Prock did during the 2010s cemented the duo as one of the most dominant this side of Force and Austin Coil — and they’ve shown no signs of slowing down.