For fans of nitro racing in the 1960s and ‘70s, the last week was a double whammy, especially for West Coast fans with the passing of Top Fuel/Funny Car owner/driver Don “the Beachcomber” Johnson and Top Fuel/Funny Car/Fuel Altered pilot and owner Henry Harrison. 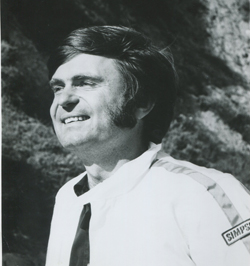 Johnson earned his dual his “Beachcomber” nickname honestly, growing up in the Southern California seaside paradise of Malibu where he enjoyed surfing and skin diving and was a competitive high diver as a student at the Harvard Military Academy. He later moved to the posh harbor city of Marina Del Rey. He also earned his other nickname  “Spendo” -- which he proudly wore on his helmet visor – because he came from a well-heeled family that owned a large heavy equipment rental business and Johnson was never shy about spending money to have the best parts and drivers.

Johnson began his racing career after getting busted for street racing and losing his drivers license. He set about building a race car in the family garage, a flathead-powered roadster that ran at the tracks in Saugus and Santa Ana.

By 1958, he was a member of the famed Burbank Road Kings car club that included the likes of Tommy Ivo, Don Prudhomme, and Bob Muravez. In an interview with National Dragster in 1996, Johnson said that getting into the club including an embarrassing initiation. For Muravez, he had to go to San Fernando Raceway and sell balloons while wearing a diaper. Prudhomme had to pull a rickshaw hauling Muravez through the packed cruise crowd at the Toluca Lake, Calif., Bob’s Big Boy in a diaper with a baby bottle hanging around his neck.

He bought a chassis from Kent Fuller, Ivo supplied an engine, and Burbank-based Daddy’s Auto Body supplied the backing from 1958 through 1961,

With noted chassis builder Roy Fjastad, he ran a 300-cid unblown Mopar feeler in 1962, then put a blower on the engine the next year and tossed it into a dry lakes belly tanker the next year and joined the Bonneville 200-mph Club and set the B/Lakester record at 272 mph.

In 1967, he hired superstar Tom “the Mongoose” McEwen to wheel his car and was rewarded with the first six-second clocking, a 6.97-second pass on May 7 at Southern California’s Carlsbad Raceway.

Another SoCal favorite, Norm Weekly, took over the butterfly. In one memorable instance, Weekly totaled the car at New York National Speedway but Fjastad built them a new car in a week. Hank Westmoreland took over in 1969 and made Johnson a national event champ by winning the 1969 Springnationals in Dallas, defeating Kelly Brown in the final. 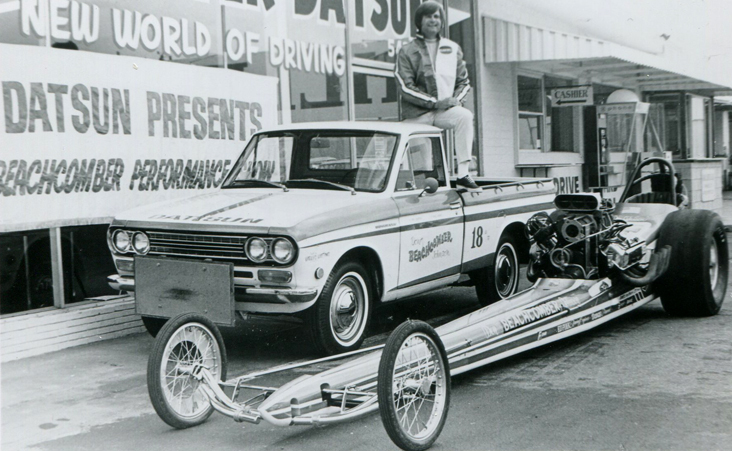 In 1970, Johnson upped his game, not only fielding two cars -– the second piloted by 22-year-old “Colonel” John Travis on nearby Westchester, Calif. -- but also brokering a deal with sponsors to do performance clinics at Datsun and Dodge auto dealerships and Goodyear stores near his bookings, hosting 60 of them in five months.

Being "the Beachcomber" seemed to Johnson to always mean that when magazines wanted to do photo shoots or he wanted to do publicity shoots, it means a trip to the actual beach, which came with its own headaches, as you can see above in these photos from late, great ND Photo Editor Leslie Lovett. 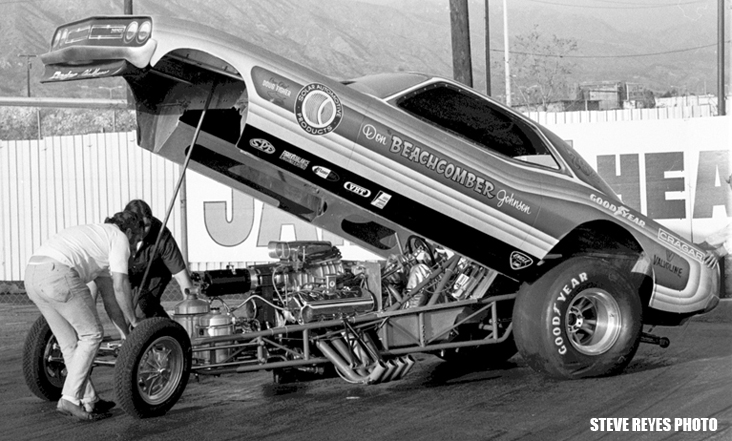 He then switched to a Top Fuel/Funny Car combo for a while but had nothing but problems with the Funny Car. A June 1971 engine explosion and fire in Detroit left him with third-degree burns before he dove out of the window at 40 mph, breaking his arm in the process. Another fire in 1975 at New York National finished off his Funny Car career.

In his post-racing days, Johnson was involved in public relations and worked for a variety of aftermarket performance companies in various roles. 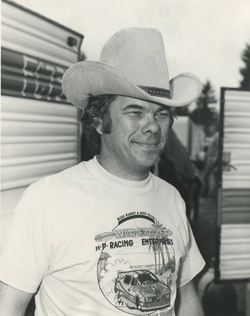 Harrison was a well-respected Funny Car wheelman in the 1970s and ‘80s, best known for his long partnership with Funny Car crew chief “Famous Amos” Satterlee, but if it had nitro in it, Harrison could be found behind the wheel.

Born and raised in Arkansas, he moved with his family to Southern California when he was 13 and was fortunate to land in Bell Gardens, Calif., the famed stomping grounds of guys like the Condit brothers, Gene Beaver, and some guy named John Force.

His first racing took place at the famed Santa Ana Drags in the 1950s, when he wheeled a ’56 Chevy but he quickly gained experience and before long partnered with Nolan Pritchard on a series of Fuel Altereds in the mid-1960s. 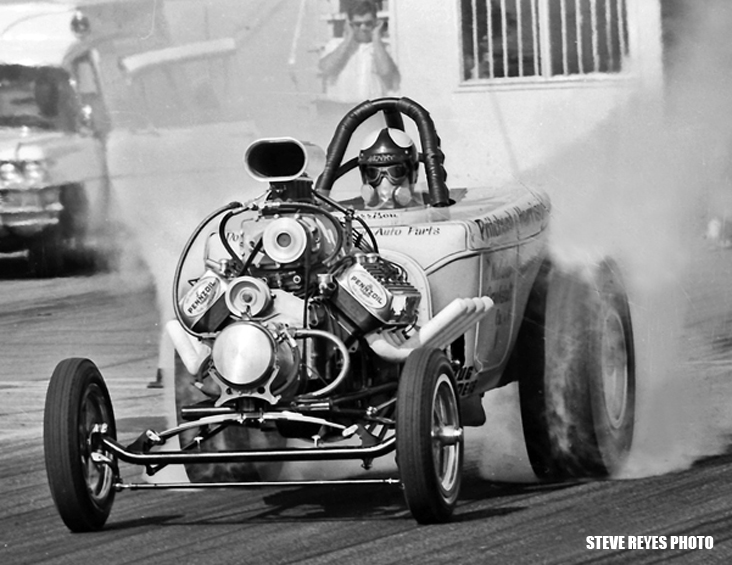 Harrison and Pritchard had a couple of cars, the Crazy Horse ’48 Fiat Topolino and this car, the Beaver Hunter ’23-T, all of them powered by blown nitro 392s. (The Beaver Hunter went on to also become Force’s first serious race car.) Harrison’s skills in the temperamental short-wheelbased handful caught the attention of Leon Fitzgerald, who invited them to join their Fuel Altered tour with the likes of “Wild Willie” Borsch and Leroy Chadderton. He also spent some time behind the steering wheel of John Aleman’s shepherd Fuel Altered.

A crash at Lions Drag Strip ended Harrison’s Fuel Altered career. He returned briefly to Arkansas, where he got a ride in Mike Heim’s locally-based Top Fueler. 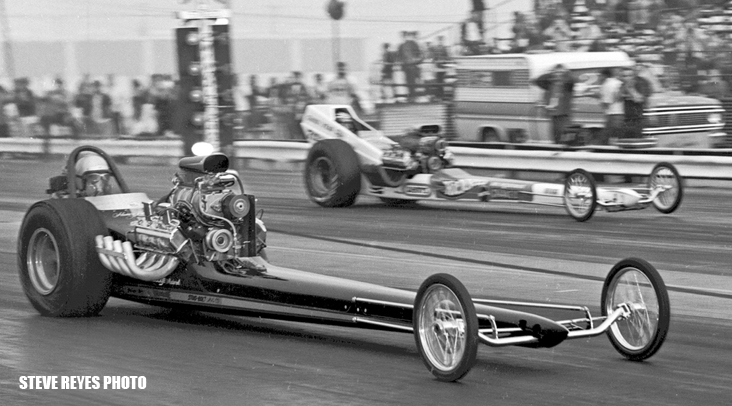 When he returned to California the following year, he landed a ride in the Ewell, Bell & Goodwin Top Fueler, replacing Carl Olson, who was beginning his long and fruitful relationship with Mike Kuhl. Harrison knew Jack Ewell, who was the manager of Mickey Thompson’s speed shop, where Harrison used to buy nitro for the Beaver Hunter. 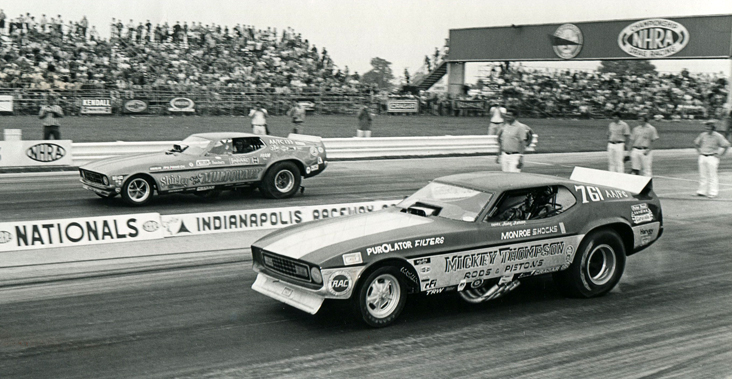 The 1971 season made a trivia question out of Harrison, who set low e.t. and top speed that year in both Top Fuel and Funny Car. He had the best numbers in Top Fuel ( 6.62, 223.32) at the ’71 Winternationals in the Ewell car, where he was a semifinal loser to Kenny Safford, and later that year, after accepting a ride in Mickey Thompson’s famed Mustang Funny Car, had low e.t. and top speed (6.54, 226.70) at the U.S. Nationals, where he blew the clutch in the semi’s against M/T teammate Dale Pulde, who went on to runner-up to Ed McCulloch in Thompson’s lightweight Pinto.

In 1972, Harrison took the wheel of Thompson’s Vega but had to relinquish it to Pulde, who had burned up the titanium-infused Pinto. Harrison had no problem finding a ride, landing in the saddle of “Big John” Mazmanian’s Cuda, where he first began to work with Satterlee. 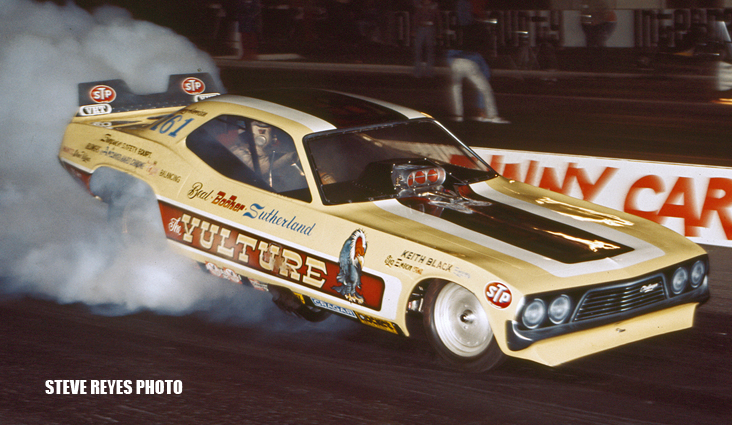 Harrison struck out on his own the following year, partnering with Satterlee and Arizona car dealer Larry Beal, who had just purchased the ex-Candies & Hughes Barracuda. The team renamed the car the Vulture and became a SoCal match race mainstay and even toured down under in Australia in 1975. 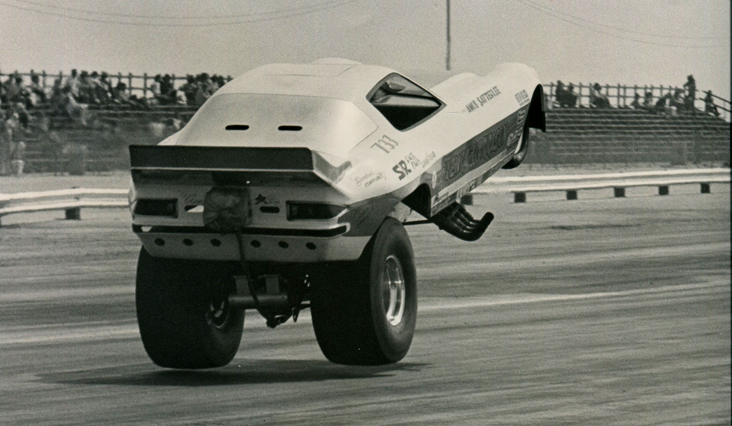 Harrison and Satterlee got a new car, a Camaro in 1977. The car was named Super Chief, a name borrowed from good friend Nelson Carter’s lineage. The Super Chief ran strong, winning numerous divisional events and won the Division 7 championship in 1978. This wild, near-body-unlatching moment, shot by Bob Johnson, happened at Bakersfield.

Harrison next hitched a ride with his old Bell Garden neighbors, the Condit boys, in the famed L.A. Hooker but the partnership was short-lived after the car was sold to “Jam-Air John” Martin, but Harrison went along with the car. Harrison then became another trivia note as the first Funny Car driver to run a losing five-second elapsed time when he fell on a holeshot to Raymond Beadle in the first round of the 1981 World Finals, 6.00 to 5.98.

Harrison finished out his career in Dwayne Lidtke’s Firebird, a string-running local car whose best finish was a runner-up at the 1983 March Meet. After his driving career ended, Harrison, who while on the West Coast had worked for mechanical contractor W.W. Price, the firm that helped build Dodger Stadium, went to work with the late Bob Brooks at AFT cutches and then returned to his Arkansas homestate where he worked in the underground electrical business.

As with everyone that I salute in this column (and there have been way too many), we know that even though they're gone, they'll live on in our memories and photos.

Stay safe out there, folks.