A lot of people meet online, from old high-school friends reuniting to couples getting together, but it's not often that a team owner finds his driver on social media, but that’s the way that Terry Totten connected with his new shoe, Joey Haas, who is making his Top Fuel debut this weekend in Totten’s dragster.

Haas, 29, is a second-generation driver who has cut his racing teeth in Top Fuel and Funny Car on the nostalgia-racing circuit and Totten has given him the chance to try it in the big leagues.

“Last fall Terry was putting together a Funny Car for his team Terry's wasn’t necessarily looking for another driver but kind of looking for some help, so I told him I could get together a couple of guys to help kind of bring a little bit of money,” Haas recalled. “I had posted a picture of my license when I had the Nostalgia Top Fuel and Nostalgia Funny Car and Terry said, ‘Now you only need Top Fuel,’ and I was like, ‘What are you hinting at?’

“So, just started the licensing process in the spring, We went to Phoenix to make some license runs and wanted to go to Las Vegas event, but it got canceled, so he ran any Indy 1, 2, and 3 in the car. The first available time to make my last license run was after Indy 3, on the Monday after the race.”

Haas enters the Denso Spark Plugs NHRA U.S. Nationals with just seven runs under his safety belts, including a pair of 3.95s.

“The car has run 3.93 and I think we got 3.89 in our back pocket. Terry has given me a good car up to this point and it’s been consistent. I think we're starting to turn some heads and try to keep the guys honest this weekend.

“I’m speechless. This is the biggest stage and best race of all and to make my debut here is very special.

“My dad got licensed in an Alcohol Funny Car in 2005 and I had been crewing since I was younger than that, and then I got my license at 18 -- just a local guy’s Super Comp dragster -- and then bought an Alcohol Funny Car of my own and ran it on the nostalgia side of things and match racing --it was a 7.0 car—and the started running some more nostalgia stuff on Extreme Top Fuel circuit driving Steve McClain’s dragster.

“My first nitro run was in Tom Motry’s Drastic Plastic ’48 Anglia –- my dad actually drove the car and set a world record of 5.28 in it; I went 5.43 -– so I’ve done that kind of racing for four years to gain experience. 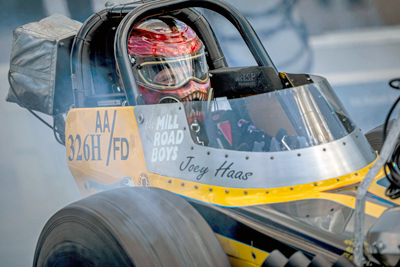 “It's one end of the spectrum to the other. I tell guys who ask me how's it different to drive each kind of car, and it’s as if you’re going into your brain when you try to drive something. You got a folder that's Funny Car driving and you got a folder that's nostalgia Top Fuel  and you’ve got another named Top Fuel, and whenever you pull up to the weekend you grab that folder and try to drive it. You obviously have to finesse this car a lot more than the Funny Car, where you need to get aggressive. The more runs I get in the Top Fueler maybe the better I'll get.

“I have to thank Chip Lofton and Strutmasters, John Hale, and Jordan Ballew -– he drives the Ballew Thunder Nostalgia Funny Car and owns a convenience store in Oklahoma and wanted to be part of this -– who have made this all happen,” he said.

Haas, an electrician by trade, is also helping to fund the car through the business that he and his wife, Elizabeth own, The Barn at Murphey Farm, a wedding venue in Pleasant View, Tenn., with a 7,000-square-foot air-conditioned and climate-controlled barn on a 60-acre farm.