NHRA National Dragster photographers Jerry Foss, Marc Gewertz, and Randy Anderson were all over Auto Club Raceway at Pomona to capture the action on and off the track at the 60th annual Lucas Oil NHRA Winternationals presented by ProtectTheHarvest.com.
09 Feb 2020
NHRA National Dragster staff
Gallery 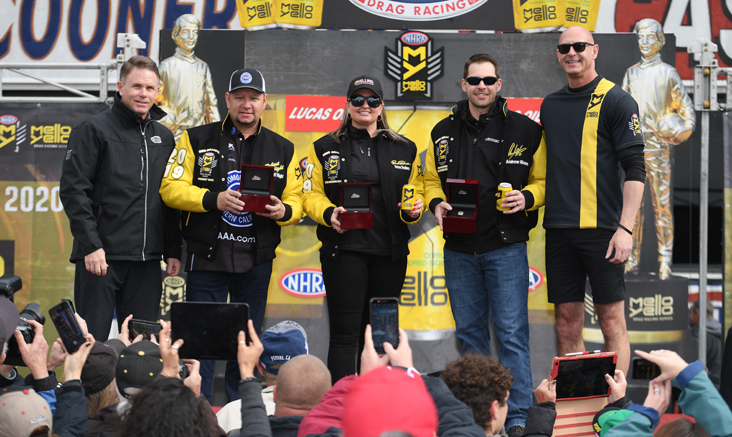 Jason Line, left, and Jeg Coughlin Jr., who both have announced that 2020 will be their final full-time seasons behind the wheel in Pro Stock, were part of the pre-race activities with host Jason Logan. 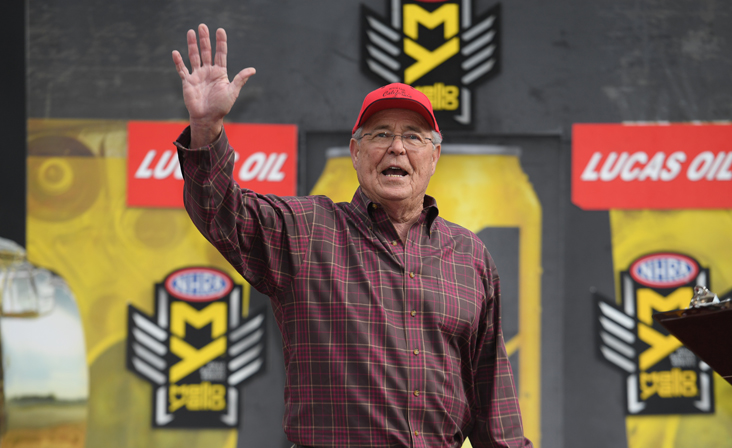 "The California Flash," Butch Leal, who was part of Pro Stock's inaugural season in 1970, is a guest of honor in Pomona as NHRA kicks off its yearlong salute to 50 Years of Pro Stock.

Cool weather Sunday led to a cool track and tire shake affected a number of the Top Fuel cars including, from left, Brittany Force, Shawn Langdon, and Austin Prock. Force and Prock survived while Langdon was defeated.

Prock deftly pedaled his ride but was falling behind Cameron Ferre before the privateer kicked the rods out further downtrack, allowing the reigning rookie of the year to advance [video]. 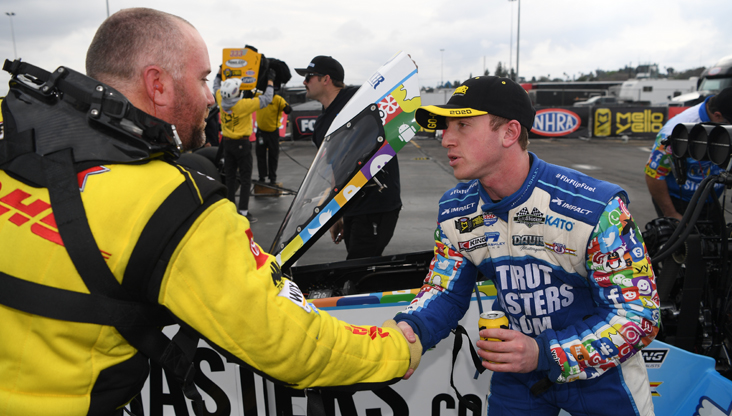 Justin Ashley, right, who will be one of the favorites for the 2020 Auto Club Road to the Future award for top rookie in 2020, defeated Langdon to continue his impressive young career. 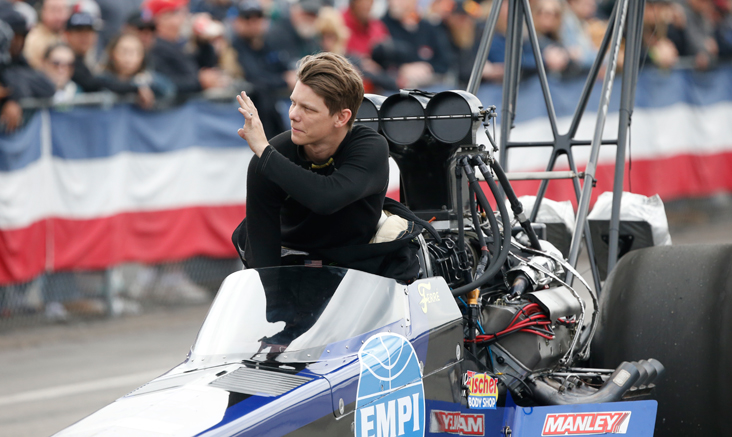 Ferre, who brought sponsorship from famed Volkswagen parts supplier EMPI for the event, remains a darling of Pomona fans. 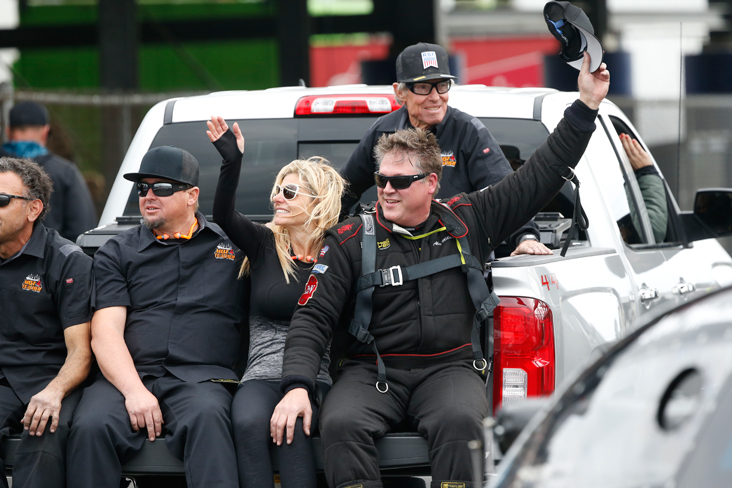 Alex Miladinovich and his wife Marcy have also quickly become fan favorites after qualifying for the Funny Car field in their debut and his emotional top-end interview. Read more about them here.

Alexis DeJoria, right, scored the first round-win of her comeback season, taking an easy win after Paul Lee kaboomed the engine in the other lane.

Steve Graham pulled off a huge upset in round one of Pro Stock, powering his Taco Bravo Camaro to victory over former world champ Bo Butner. 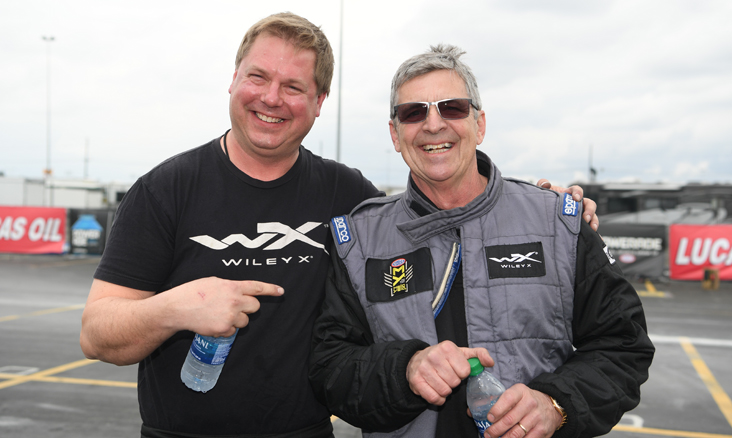 Teammates Val Smeland, left, and Kenny Delco had the misfortune of drawing one another in round one of Pro Stock. Delco took the win and then advanced to the semifinal round. 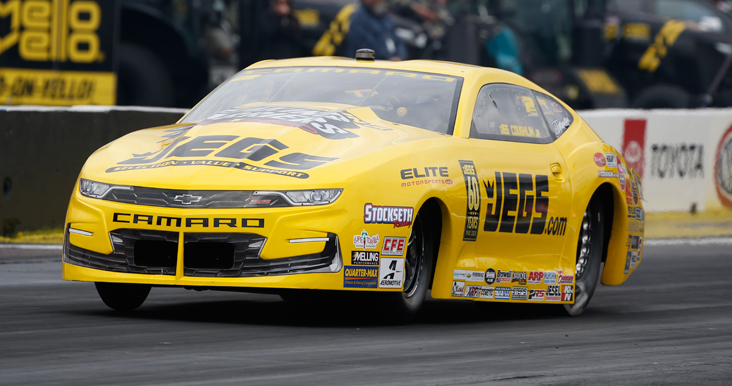 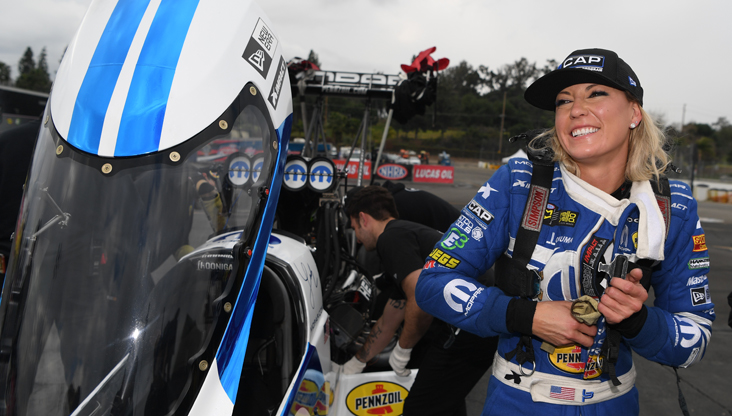 Leah Pruett and the Todd Okuhara-tuned Mopar dragster were living in the 3.60s at the event, qualifying No. 3 with a 3.687 and running 3.659 and 3.685 Sunday before losing in the semifinals. 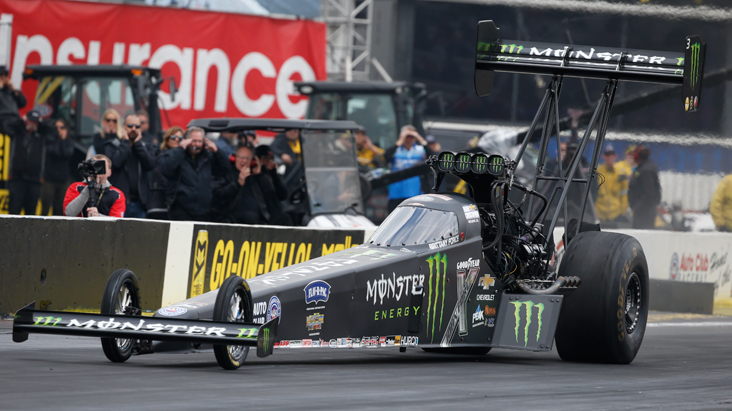 Brittany Force ran the third-fastest speed in Top Fuel history, 336.23 mph, in round two but fell to Doug Kalitta in an exciting semifinal bout, 3.67 to 3.68. 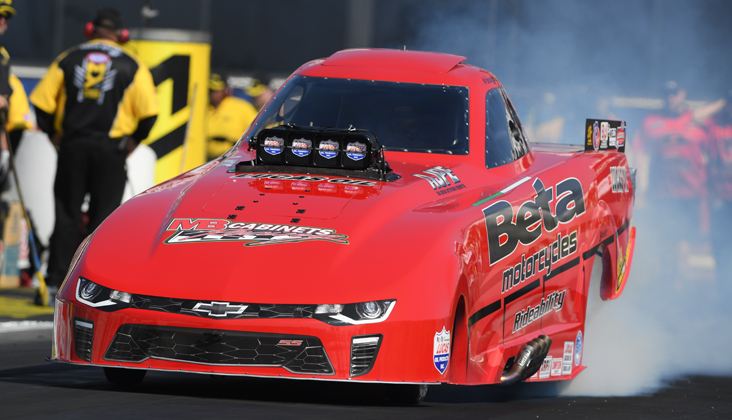 Second-generation Top Alcohol Funny Car racer Doug Gordon, competing in his first race since his crash last fall in Las Vegas, impressed with his new Beta Motorcycles Camaro, which is constructed around the first chassis ever built by two-time world champ Jonnie Lindberg. Gordon reached the final round but broke the transmission against Aryan Rochon.

Jack Beckman, near lane, backed up his victory at last year's Auto Club NHRA Finals with his first Winternationals Funny Car title, defeating John Force in the final round with low e.t. of the meet, 3.83.

Doug Kalitta, near lane, won the Winternationals for the third straight year -- the first time any Top Fuel driver has accomplished that goal -- defeating Austin Prock in the final round. 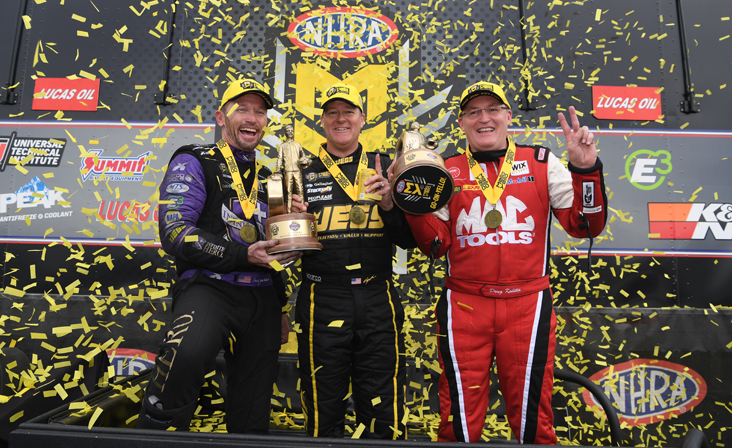 The event champs -- Beckman, Coughlin, and Kalitta -- celebrated their Winternationals victories in a shower of confetti. Next stop: Phoenix!