On this day in history, 1992: Kenny Bernstein breaks the 300-mph barrier

Twenty-eight years ago today, on March 20, 1992, Kenny Bernstein broke the 300-mph barrier at the 1992 Gatornationals. In this archived interview, Bernstein looks back on the accomplishment and the road to the barrier-breaking pass.
20 Mar 2020
Posted by NHRA.com staff
Feature

Reprinted from the April 3, 1992 issue of National DRAGSTER

GAINESVILLE, Fla. -- Long after most people have forgotten who won the 1992 Motorcraft Gatornationals, they will remember what took place on that Friday afternoon at Gainesville Raceway.

At 4:44 p.m. March 20, Kenny Bernstein made drag-racing history by becoming the first driver to eclipse the 300-mph mark. Bernstein recorded the fastest speed ever for a Top Fueler at 301.70 mph in his Budweiser King dragster.

Bernstein collected a check for $50,000 from Slick 50 for becoming the sport's first 300-mph driver and although the money probably is already in the bank, Bernstein still hadn't taken full deposit of the feat he had accomplished.

"It has sunk in some because of the hoopla and media attention, but I think later this week it will really hit hard," said Bernstein after losing to Eddie Hill in the final two days later. "That was the last barrier this sport may see. The next barrier may be broken long after we're gone. Consequently, it's something that will be remembered for a long, long time, and I'm extremely proud of that." 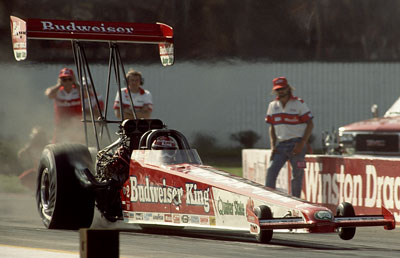 was in the first pair of cars down the racetrack in the second of two qualifying sessions on Friday. Opposite Bernstein, who was in the left lane, was Al Segrini. When Segrini smoked the tires, all eyes were riveted on Bernstein.

"I knew I was going pretty fast because I had to drive farther than I normally do to make the turnoff," said Bernstein. "Some track workers were holding up three fingers as I drove by, and I thought they were trying to tell me that I had moved into third on the qualifying ladder. It wasn't until they ran up and told me that I had run 300 that I knew it."

Bernstein's elapsed time on the run was 4.823, the quickest ever until Hill went 4.801 two days later in eliminations.

Bernstein's previous fastest run came two weeks earlier at the Slick 50 Nationals, where he went 296.93 mph despite dropping a couple of cylinders. At the same event, Mike Dunn ran 297.12, the fastest lap in drag-racing history at the time, and Pat Austin reset the class' National speed Record at 295.27, giving credence to the possibility of a 300-mph run at the Gatornationals.

Austin reset the Gainesville Raceway speed record at 292.39 during Thursday's qualifying (Bernstein set the previous track record at 289.57 last year), but that was the fastest run of the meet through the first two qualifying sessions. Bernstein's fastest run to that point was 291.26, also recorded on Thursday, so when the 301.70 came up on the scoreboard, it was a real shocker.

"The car left good and was running hard in the middle of the track, but the engine got a little sour right in the lights," said Bernstein. "Normally, I would have lifted, but I told myself to drive it all the way out the back door because it might be the run. I didn't care if it dropped cylinders or not."

Bernstein backed up his 301.70 for the NHRA National Record with a 299.30-mph blast in the quarterfinals of Sunday's eliminations after running 298.30 in the first round. 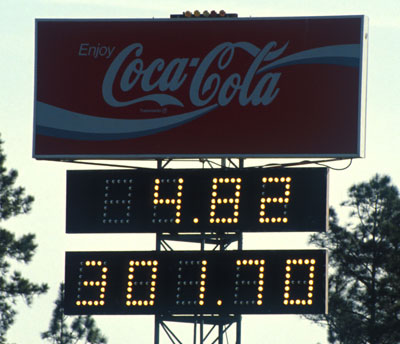 He credited crew chief Dale Armstrong, Wes Cerny, who he hired as Armstrong's right-hand man at the end of the 1991 season, and the rest of the Budweiser King crew with making it possible.

"To accomplish this feat took a real team effort," said Bernstein. "I have a crew chief, Armstrong, who has been with me for 10 years and has directed our team to four NHRA Winston Funny Car Championships. At the end of last year, we hired Cerny, the crew chief who put the first Funny Car through the 290-mph barrier. Without the ability of those two and the other guys on our team who work so hard every week, I wouldn't be in this position."

Armstrong has experienced many great moments in his drag-racing career, first as a 12-time National event-winning alcohol and fuel driver and later as the crew chief who tuned Bernstein to four straight Winston Funny Car Championships.

Armstrong has more than earned his paycheck as the highest-paid crew chief in drag racing, developing the lockup clutch and pioneering the use of on-board data loggers. He has watched with great satisfaction as Bernstein crushed through the 260- and 270-mph barriers in the Budweiser King Funny Cars and tacked up winning runs and National Records on scoreboards across the country.

But he didn't see at first the scoreboard number that forever will cement his and Bernstein's names in the annals of motor-racing history. When Bernstein lit up the left-lane scoreboard at Gainesville Raceway Friday with a 4.823, crossing the finish line at 301.70 mph, all that Armstrong saw initially was the 4.82, and his face lit up. He was pleased not only that his car again had made the quickest run in history, erasing the 4.84 it had run two weeks earlier in Houston, but also that the car had improved on its Thursday 4.91.

"It left hard and had the front end up nine or 10 inches, but it was going straight as a stick. I knew it was going to be a good run. When the 4.82 came up, I said, 'Yeah!' and turned and started walking back to the van. I'd only gone a step or two before I heard this big roar, and I wondered what had happened. Then it hit me that this might have been 300. I was scared to turn around and look at the scoreboard again. But I turned around and there it was: 301. The whole place went crazy." 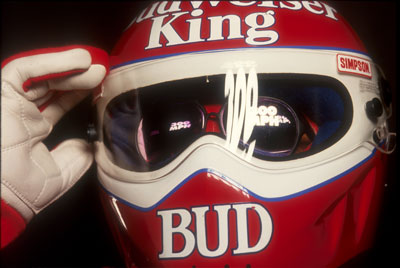 The run that appeared to be pure mechanical poetry, a run that most only could conceive of having occurred with ultimate mechanical perfection, was in fact marred when a cylinder stopped firing four-tenths of a second, or about 200 feet, before the finish line. "I didn't really want to tell anyone that it had dropped a cylinder and still ran 300 because everyone will say, 'Yeah, right,' but it did," Armstrong confided.

It also borders on unbelievable to consider that the Budweiser King was not set on "kill" when it smashed the barrier.

"After we ran the .91, we shook the tires on the next pass, so I actually went back and took some power out of the car," Armstrong admits. "When we came up for the next run, I was hoping I'd taken enough out of it, but on the other hand I was hoping I didn't take too much out of it.

"I'm just glad that we ran 300 mph at an NHRA National event in front of all the fans and NHRA officials, so there's no doubt," he added. "Let's face it; we could have run 300 mph in testing or at an IHRA event and people wouldn't look at it at the same way. I'd feel that way no matter who did it."

The cracking of the 300-mph barrier was more a case of putting something in than taking it out. The first ingredient was added last November in the personage of Wes Cerny, who tuned Roland Leong's Hawaiian Punch entry to unheard-of Funny Car speeds above 290 mph last season. Armstrong knew then that 300 mph was within reach.

When Armstrong and Cerny began to dial in that combination this year and a 4.84, 296.93 popped up on the boards at the Slick 50 Nationals just two weeks before the Motorcraft Gatornationals despite the engine dropping two cylinders, Armstrong sensed that the kill was at hand. 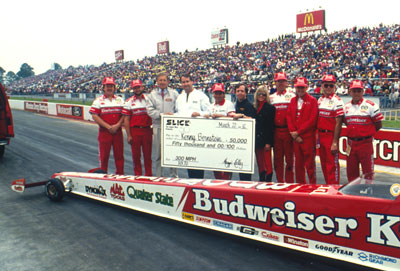 "All year I've thought that 300 mph was within reach and that someone would run it before the year was out," he confirmed. "I wasn't sure we would be the first, but I thought we could do it as soon as we got the right ignition and got it to run on all eight cylinders on the other end."

Leaving Houston, Texas, after the Slick 50s, Armstrong publicly made the bold prediction that if he worked out his ignition problems (he had been forced to run weak magnetos due to a problem with the system's points), Gainesville just might be the site of the first 300-mph run. He and Cerny toiled hard between races, altering the insides of the magnetos to raise their power without burning up the points. The mission, obviously, was a success.

There's no doubt that Armstrong's career has been filled with highlights and headlines, but this will be the one he cherishes most. Fame may be fleeting, but not in this case.

"This is it; this will be the one that people remember," he said proudly. "People have already forgotten all that other stuff. That's old news. Austin Coil gets more credit for the lockup clutch than I do, and I designed and developed it. We were the first over 260 and 270, but that's yesterday's news.

"Being the crew chief on the first car to run 300 means more to me than any National event win or any Winston Championship. There isn't any question at all. People will forget what years we won the Winston Championship, but they'll never forget when 300 was run and who did it."