Chris McGaha and his son, Mason, have a plan for Indy, and it involves both of their Harlow Sammons team entries making it to Sunday’s final eliminations in Pro Stock.
05 Sep 2020
Kevin McKenna, NHRA National Dragster Senior Editor
Feature

There are 22 Pro Stock cars trying to qualify for the Denso NHRA U.S. Nationals and if Chris McGaha has his way, both he and son, Mason, will occupy two of the 16 available spots on Sunday morning. At least that’s their plan. So far, in two appearances at the summer events held at Lucas Oil Raceway at Indianapolis, Mason has yet to make the field, but he’s been close, and considering he’s had his NHRA competition license just a few months, he’s doing just fine. When asked to evaluate his son’s progress, Chris doesn’t grade on a scale.

“He’s come a long way in the last few months and I’m being honest here we had a lot of room for improvement,” said Chris. “When we tested on Monday after Phoenix, it was a complete [expletive] show. We concentrated on Mason’s car but really didn’t get anywhere. I don’t know any other way to say this, but he just wasn’t driving the car the way you’re supposed to drive a Pro Stock car. When we left Phoenix, I had a 700-mile drive to think about it and that’s when it dawned on me what I needed to do in order to help him.” 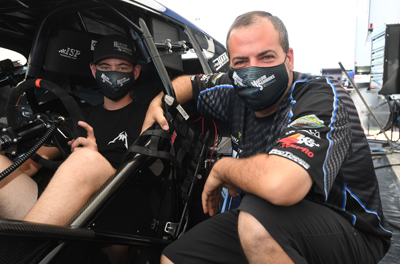 It's a well-known fact that Pro Stock cars are difficult to drive. With a clutch pedal, manual shifter, and a sprung suspension that all must work in concert with each other, Pro Stock cars might require more technical precision than any car in NHRA competition. Therein lies the challenge for the McGaha family and almost anyone else looking to make the move to the factory hot rod class. Mason, 18, grew up racing in Jr. Dragsters and he later got a chance to wheel the family’s COPO Camaro. Neither one had a manual transmission and perhaps, more importantly, neither one had a two-step ignition that allows the driver to launch with the throttle on the floor. Mastering an entirely new routine takes time, and Chris found a way to help accelerate the learning curve.

“We put a camera on Mason’s feet and I pretty quickly realized what he was doing wrong,” said McGaha. “Since he wasn’t used to it, he was getting off the clutch pedal too soon; not even waiting on the Christmas Tree. I finally, put him in this 2002 Firebird Stock eliminator car that we’ve got, and it has a two-step. We went to our local track and he picked it up pretty quickly. We just needed to teach him to wait for the light. He has definitely come a long way in the last six months. Actually, he’s come a long way since June.”

When it comes to Mason’s first to Pro Stock starts at Indy in July and August, Chris is willing to shoulder the blame for Mason’s two DNQs. In both cases, he insists it was more the result of a tune-up issue than a driver problem.

“He should have qualified at both races; that’s a fact,” said McGaha. “At his first race, we didn’t have the guts to go for it. He had my best engine in the car but we were soft. The same thing at the second race; the crew chief shafted him. There’s no reason why we both shouldn’t get in here. Actually, I’ve got one of my engines in Steve Graham’s car and there’s no reason why we shouldn’t all be around one Sunday. I brought eight engines here and they’re all good. Let’s just say I’m pretty optimistic even if we qualify 14, 15, and 16. Actually, I seem to do well when I’m ninth. That’s where I qualified when I won this race. We just need a place to start.”

Fast forward to Friday night qualifying at the Denso Auto Parts NHRA U.S. Nationals and both McGaha entries are solidly in the mix. Mason was one of the first drivers out during the session and made the quickest run of his career with a 6.636 that is 13th quickest. Later in the round, dad powered to a 6.553, a run that was second only to Greg Anderson’s 6.549.