Bob Tasca III is on a mission to win a championship and help us all avoid the disease that caused him to miss the E3 Spark Plugs NHRA Nationals.
24 Jul 2020
David Kennedy
Feature

Bob Tasca III is known for his tenacious energy, his passion for drag racing, and his inseparability from the Ford Motorcraft/Quick Lane Mustang Funny Car that bears his family’s name. When the 44-year-old announced that he’d been diagnosed with COVID-19 from exposure to the coronavirus over Father’s Day weekend, his 18-day illness and recovery process gave him a platform to spread a message that this virus needs to be stopped in its tracks—so that drag racers can keep going to the tracks.

My lungs will still take like 8 to 10 weeks to recover from the pneumonia. I’ve got a little cough, but you know, I’m 100% better than I was three weeks ago.

This has been a very different race season than you expected. 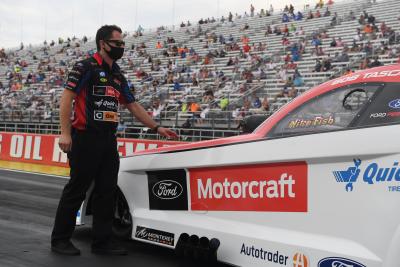 We just weren’t where we wanted to be going into Pomona, and at Phoenix we made it through round one by pedaling the car, but we knew Tommy [Johnson Jr], had us covered [with a better setup] so I took a shot at the Tree. It’s just my personality, and it didn’t work out.

Frustrated, I told the boys we’re not leaving Phoenix, and we stayed an extra day to sort things out.  We ended up making the four fastest runs I’ve ever made in my career – temperature-adjusted – we ran an .86 and .87 on 117 and 115-degree track. We really felt that we could not get to Gainesville fast enough.

We all know what happened next.

I just remember leaving Phoenix so excited about how the car ran. Then the end of the world hit. We have such a great team and such a great car. Fortunately, it’s very early in the season, and I have all the confidence in the world with Mike Neff and Jon Schaffer and the guys on the car.

When did you contract the coronavirus?

I was exposed to the virus on Father’s Day. We were nine people outside, social distancing. I’m convinced I got the virus touching something. My dad had a mask on. We were very cautious. When my mom tested positive the next day, everyone that was at the house went to get tested, along with probably 60 or 70 other people that we knew.

Exactly. Everyone that we came in contact with was tested.

Why were you so aggressive?

A: Mom didn’t feel good. She had a cough, so she was the first one that had symptoms and got tested. Then I tested positive. I think eight or nine of us that got tested that week came back positive. Then a few of my family members got body aches, and I thought, “I just got back from a two-mile run and played basketball.” They’re like, “Oh my God, you’re asymptomatic?” I said, “I don’t know. I guess so.”

“No one alive has ever been through anything like this pandemic.”

This was the weekend after Father’s Day?

Yeah, I started getting a little cough on Saturday, but nothing crazy. Monday [June 29] was my turning point. I remember having a 9 a.m. WebEx call with my whole parts team and I couldn’t get through a sentence without a cough. And they’re like, “Are you OK?’ I’m like, “Yeah, I’m fine.” I just couldn’t understand it. I went straight downhill that week and by Friday [July 3] I was in the hospital.

How bad did you feel?

I was wiped out. I started getting all the symptoms: the chills, the body aches, not being able to get out of bed, then came severe headaches. My breathing started to go downhill on Thursday. I toughed it out. By Friday I was in the hospital— Friday, Saturday, Sunday, and then Sunday night, they let me out. I started getting better every day. I felt so good Thursday that I went to get tested for COVID-19 again, I actually had two tests, and both came back negative. Now I’m saying to myself, “Well, [expletive], I can drive Sunday.” But I already made the announcement [that Jonnie Lindberg was going to drive my car] and I just thought it was a bad idea. My doctor probably wouldn’t have released me anyway. 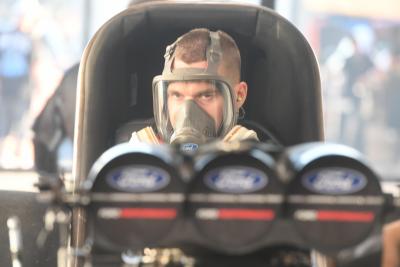 What was it like putting someone else in the car?

I’ve never missed a run in my car. It was one of the toughest things I’ve had to do. When I did the press release, people didn’t think I was that sick because at that time I wasn’t that sick. In that moment, I probably felt I could’ve driven the car, but there was no way I wanted to chance my team, my competitors, and our fans. I knew I wasn’t going to be COVID-free. So that’s when I made the call to put Jonnie in the car. Once we made that announcement, my health went downhill rapidly.

Hear how Jonni Lindberg got the call to drive for Tasca

There were rumors you might put Mike Neff in the car.

I told Jonnie the only guy who’s going to bump you is Neff. He was my first choice because he’s on my payroll and he’s a multi-time national event winner. He knows the car. I mean, that’s a no-brainer, right? But unfortunately, his [Funny Car] license wasn’t current and there wasn’t any way to make the needed runs to get it back. It just wasn’t going to work. Mike and I talked, and Mike goes, “Who else do you want to ask?” I wanted to go with Jonnie. He’s an excellent driver. A championship driver. A guy that you can count on, and a guy that I’m just so grateful to. 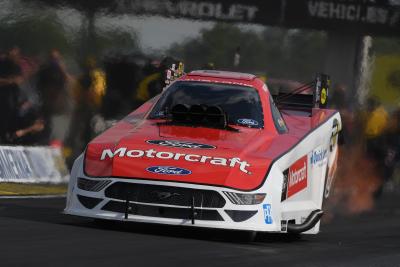 Did you watch the race?

Oh, absolutely. I think Jonnie did a great job. I know he wanted to win that second round, but I told him you’re jumping in a strange car. But he drove that thing on a string, every single run down the track. I wish like hell the kid would’ve won the race. I was cheering for him.

But watching it was like an out-of-body experience that I never want to go through again. I mean, not only was I not in the car, I wasn’t on the property. I was on the phone the whole time. I couldn’t sit down. I hope to God I never have to not be without my team again.

Did the NHRA rule change to make the championship points follow the car in 2020 effect your decision to have Jonnie drive?

I don’t think I knew about that at the time, but I commend NHRA for that because it’s the right decision. It will keep drivers from making a bad decision in their quest for a championship.

What advice do you have for the racing community on fighting COVID-19?

Recognize what’s happening. Go get tested, because even when I tested positive, I felt totally fine. When I got sick, I quarantined myself at my home. I wore a mask before, but I wasn’t as diligent as I am now. This virus is real. It’s going to be here until there’s a vaccine, period. So we all need to be very careful. If you have underlying conditions, you need to make very different decisions than people who don’t. I think you could be taking your life into your own hands at that point, because I just know how sick I was. If we all do this, we can have a huge impact on how this virus impacts us.