The quote sounds very much like something John Force could have uttered but, in fact, it came from Angelle Sampey following her most recent win at the Dodge NHRA Indy Nationals presented by Pennzoil. Sampey hadn’t won a Pro Stock Motorcycle race in more than four years and, given her struggles in 2019, she had every reason to question her ability to win races. 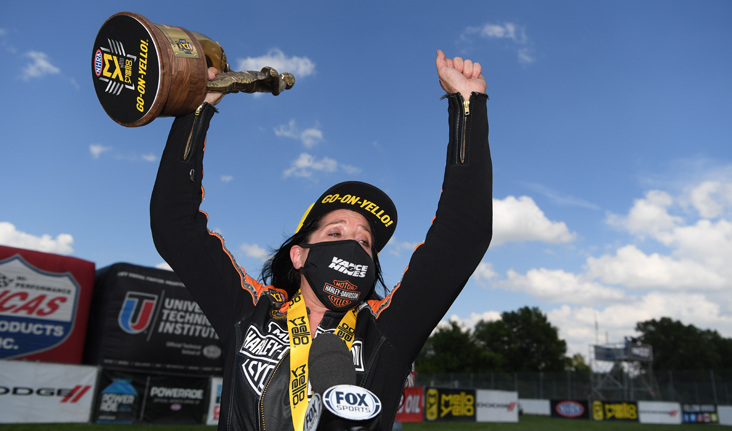 “After my win light came on, I think I got about 130 text messages, and my response to all of them was ‘You don’t know how much I needed this,’ because I was about to give up on myself,” Sampey said. “I mean, I wasn’t going to quit because that’s not my nature, but I was losing hope. I would have kept on fighting, but I know my confidence was going away. I was in a bad spot and this [win] couldn’t have come at a better time.

“Actually, I’m kind of glad that I struggled for as long as I did,” she continued. “During my career, I’ve done a lot of motivational speaking and I don’t want to come off as a hypocrite, but there were times that I’d say things to other people but didn’t know if I really believed what I was saying. I’ve told people that they can do anything in the world if they put their mind to it, but I was starting to feel like I couldn’t do that, and that’s not who I am. Tell me I can’t do something, and I will go out and do it. That’s the mentality I’ve always had.”

In what can only be described as a bombshell announcement, Sampey joined the Vance & Hines Harley-Davidson team at the start of the 2019 season. It didn’t just seem like an unlikely pairing; it was more like mission impossible. For most of her career, particularly her early years with the Star Racing team, Sampey was at odds with the Vance & Hines team and their rivalry often featured genuine animosity and hard feelings. For drag racing fans, it was the equivalent of the Boston Red Sox’s sale of Hall of Famer Babe Ruth to the reviled New York Yankees. To put it mildly, no one was more surprised than Sampey when she got the call from Terry Vance asking her to join the team.

“I always thought they hated me,” Sampey said. “For years, Byron Hines would barely speak to me, but now I’ve found out that he’s the biggest teddy bear; a genuinely caring man who just happens to be really quiet. I just never knew that. I was wrong about the rest of the team as well. I’d always been OK with Andrew, but I didn’t know if Eddie and I would get along. I’d always wanted to ride a Harley-Davidson and race with this team; never in a million years thought it would happen. 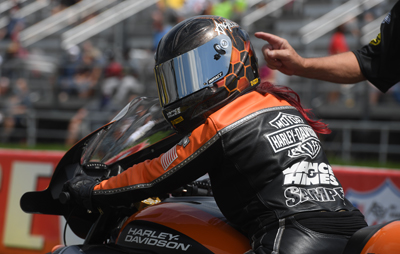 “I’ve since learned that what you see on the outside is very different from how they are. They are on a mission to win races not to make friends, but they’re also normal human beings with families and they do like to have fun away from the track. Eddie can still be a little hard on me, but I like that. Sometimes you need that.”

One member of the Vance & Hines team who always seemed to have Sampey’s back is Terry Vance, and it was his persistence that ultimately made the deal happen. The ability to recognize talent has always been one of Vance’s strong suits, and he saw a lot of potential in Sampey, and not just for the obvious marketing benefits a female rider could provide to the Harley-Davidson brand. Vance genuinely believed she still had the ability and the hunger that led her to three-straight championships from 2000-2002.

“Terry won’t let you quit on yourself; I learned that early on,” Sampey said. “He didn’t get to be successful by giving up. Throughout all of this, he’s been probably my biggest supporter.”

Sampey quickly bonded with her new teammates, but on-track success was difficult to come by. The Harley-Davidson NHRA Pro Stock bikes are difficult to ride, and Sampey found that first-hand last season when she fumbled her way to a disappointing 11-16 record with just one semifinal as the season’s bright spot. A mid-season switch to the new FXDR model was a step in the right direction, but her results remained inconsistent. To make matters worse, five of those 16 losses came via a red-light start. Racing for a brand that has a combined 10 world titles and more than 100 NHRA wins, that wasn’t acceptable.

“I felt desperate because I wanted [Vance & Hines and Harley-Davidson] to know they had made the right decision when they hired me,” Sampey said. “I thought last year I’d win more than once, but I never even came close. I wanted Terry and Byron and everyone else at Harley-Davidson to feel good about this. Last year, they used to tell me not to beat myself up, but how could I not?”   Learning to ride the Harley FXDR has been a challenge, but Sampey faces another test that she ultimately can’t win: the race against time. Two days before winning the Dodge NHRA Indy Nationals, she celebrated her 50th birthday. To suggest it’s a big deal would be an understatement.

Although she maintains a high level of physical fitness, Sampey is clearly not the same person who made her pro debut a quarter-century ago at the 1996 Denver race. Happily married and a mother of two following the recent adoption of daughter Mya, her priorities in life have changed, although her desire to compete at a high level remains strong.

“I won’t say that I’m in better shape now than when I was 30 or 40, but I’m definitely in better shape than when I was 25 and didn’t work out,” she says. Sampey’s normal routine calls for three or more days a week of strength training and a healthy dose of mixed martial arts. That’s a big change for someone who once admitted she had difficulty holding the clutch lever for extended periods. 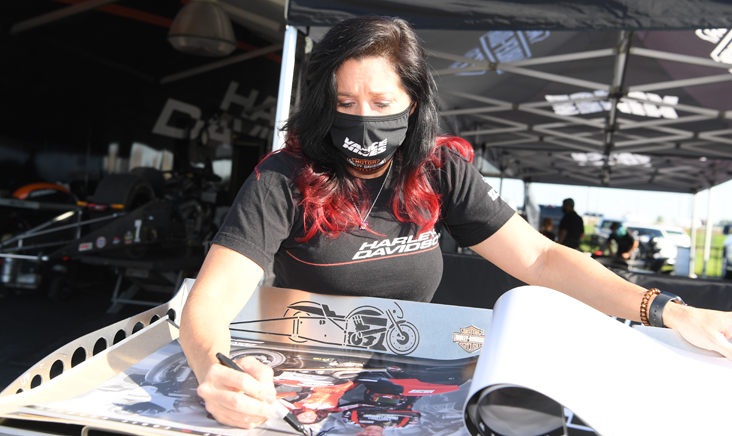 “I got even more serious about getting into shape this season, especially after all the downtime we had due to the pandemic,” said Sampey. “I still feel like I have several years left. For me, the biggest challenge is not physical, it’s mental. I felt like I was in quicksand because I couldn’t seem to get everything right. I say this all the time, but these Harley bikes are so much different than a Suzuki or a Buell. I watch Andrew and Eddie ride and they’re smooth like butter and make it look easy. That’s really deceptive. That’s just how good they are.”

Celebrating a milestone birthday at the dragstrip, Sampey took a few minutes to contemplate life and the balancing act that or being a 50-year-old mother of two and motorsports’ most successful female racer. Sampey’s qualifying results were solid as she had the fourth-quickest bike in the field, just four-hundredths behind low qualifier Matt Smith. On Sunday, she powered past teammate Hines and Scotty Pollacheck to reach the final as a significant favorite against Chris Bostick.

“In the two rounds of qualifying, I made a nice run, but it wasn’t as good as it should have been,” said Sampey. “I still have to figure out how to get the bike down the track without leaning it. On a street bike, you can do that, but on a Pro Stock Motorcycle, that’s a big no-no because you need to keep all of the rear tire planted to the track. Instead, when you need to make a correction, you move your body instead of the bike, and that means getting out from behind that little fairing and exposing yourself to the wind. You move and you feel it, and I need to overcome that fear.”

And then, of course, there was the final round. Shortly before the team fired the bike, Sampey discovered a problem with the clutch cable. It took just a minute or so to correct, but to Sampey, it felt like hours. Ultimately, the final went off without a hitch and Sampey not only won the race but did so with a nearly-perfect .001 reaction time. 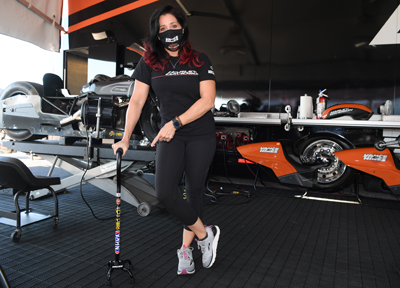 “This is where my team shines. During that whole situation on the starting line with the clutch, they were calm and professional and that’s 100% of the reason why we won,” said Sampey. “I was a wreck and they were all so calm. And, they didn’t just know what the bike needed. They knew what to say and do to keep me calm. Their whole demeanor was, ‘We’ve got this.’ I’ve realized that the last year and a half, they’ve been paying as much attention to me as they have to my motorcycle; Andrew especially, he pays attention to everything. This was his first official win as a crew chief and I’m really happy to give it to him.”

Wally No. 43 in hand, the obvious question now becomes, where does Sampey go from here? Can she win more races? Does she have enough left for one more championship run? She certainly believes so.

“I’m so much more comfortable on that bike than I was a year ago,” she says. “I’m fierce. My confidence is back, and I feel like a dragon again. Now, it’s up to me to show everyone that wasn’t a fluke. This year has been so crazy with all the missed races and cancellations and now I just want to keep going. I think Ron Capps said it best when he said, when we were young and winning all the time, we took it for granted. Now, you never know if each win might be your last one. I feel that. I don’t want this to be the last one.”