After qualifying in his Funny Car debut, the sky's the limit for Alex Miladinovich

Alex Miladinovich was like a lot of fans at the drags. He sat in the grandstands watching Funny Cars and dreamed of someday being there himself and competing against John Force. The difference is that Miladinovich made it happen.
09 Feb 2020
Phil Burgess, NHRA National Dragster Editor
Feature

Alex Miladinovich was like a lot of fans at the drags. He sat in the grandstands and watched the awesome Funny Cars roar down the dragstrip and dreamed of someday being there himself and competing against John Force

The difference is that Miladinovich made it happen.

After years of toil and a seven-year apprenticeship in Nostalgia Funny Car, Miladinovich made his “big show” debut at the Lucas Oil NHRA Winternationals in a chassis he built at home and a engine built by his brother Robert and qualified in his debut. He’ll face two-time former world champ Matt Hagan in round one.

“It feels awesome,” he said Saturday night after his place in the field was secured when Jim Campbell, the only driver with a chance to knock him from the field couldn’t do it alongside him. “It’s been a long time coming – 35 years. I wanted to do it I just didn't know if I had the macho to pull it off I came here when I was 15 years old, in 1991, and watched John Force, Chuck, Etchells, and Ed McCulloch -- I mean I’m a huge fan everyone out here and they've all been really supportive and helping me out.”

“We were trying to run a 4.20 but we’ve been chasing a little bit of stuff in the all-valve and the incrementals improved on that pass but I just felt it shimmy and I was so nervous but I didn't see Campbell so I just lifted and I just figured out let's just quit while we're ahead.”

It’s the completion of that dream that took a lot of work. Miladinovich, a disciple of Southern California chassis-building legend Steve Plueger, built the car in his garage after learning how to TIG weld.

His first race went about as well as could have been expected, The team, led by veteran Kevin Poynter, was able to make all four qualifying sessions and Miladinovich looked right at home on the starting line with the eyes of the world upon him.

“We tested all summer and we just been out there doing on the working on the process, working on staging and starting-line procedures and everything,” he said. “Once we get this fuel system figured out -- we just gotta tickle it and not doing anything dumb – it will be better. 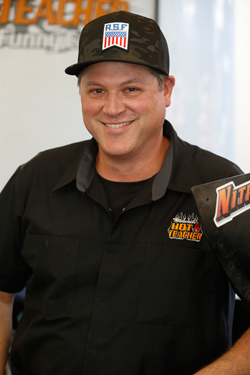 “I just gotta go run my game against Hagan. My old friend Tommy Allen told me, ‘The fast guys are always gonna be fast and you can't beat him, what you do is just come out and run your own game and cut a decent light.

“I can’t thank everyone enough for the help. The Kalittas, the Schumacher’s, Big Jim [Dunn], the Forces, Wilkerson have all been really kind getting me parts. I try not to badger them too much.”

The team will probably skip the upcoming Phoenix event and concentrate on getting ready for the Denso Spark Plugs NHRA Four-Wide Nationals and hit as many events as he can in the western U.S. and has even considered trying to find an East Coast base for the car in the summer.

Miladinovich’s wife, Marcy, is a Jr. High teacher –- his Hot For Teacher car is in tribute to her --- and both of his parents were teachers, so they’re very invested in the education field and trying to help kids further their careers, especially in motorsports.

There’s a lot of bright in his future, but first he has to face Hagan and continue his own education.