From birthday to present day, the evolution of the Pro Stock class has been dramatic to say the least. Here’s a comparison of a 1970 versus 2020 NHRA Pro Stock car.
13 Feb 2020
Kevin McKenna, NHRA National Dragster Senior Editor
Feature

Launched a half-century ago with an official kickoff at the Winternationals in Pomona, Pro Stock has provided NHRA fans with some of the sport’s greatest moments and produced some of its most well-known and beloved heroes.

Turning the clock back to 1970, the Pro Stock cars that raced in Pomona were essentially the best Super Stock and Modified Production cars of the day. By the late 1960s, it had become obvious to racers, fans, auto makers, and NHRA that there was a growing need for a heads-up class for production-based vehicles to showcase the latest muscle car offerings from Detroit.

Incredibly, the 1970 NHRA Rulebook dedicated barley one page to the specifications for the new Pro Stock class. The rules dictated that all Pro Stock cars be ’68 or later North American-built production vehicles and be equipped with a gasoline-burning V-8 engine as originally produced by the manufacturer. There was also a seven-pound per cubic inch weight break and a 2,700-pound minimum weight. Bodies were required to be stock steel with the exception of hoods and deck lids, which could be made of fiberglass. Additional regulations called for a stock-type front suspension, stock transmission, and a full interior, including upholstery and dashboard. To the letter of the rule, these were indeed production-based vehicles, albeit highly modified ones. 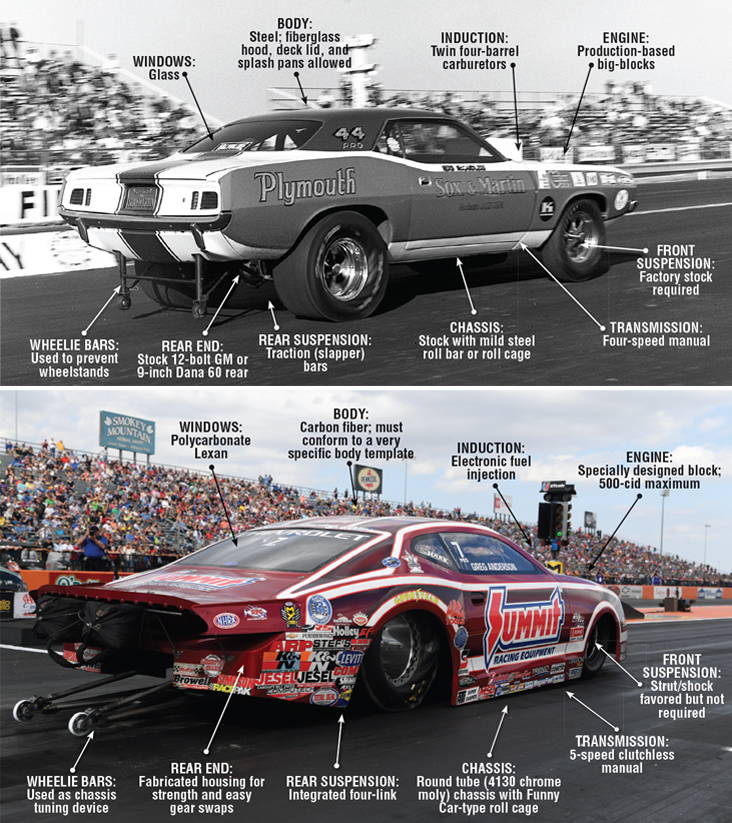 To suggest that Pro Stock has changed in the last half-century would be a huge understatement. In terms of performance, the class has picked up roughly 3.5 seconds and 75 mph, but those numbers don’t even begin to tell the story of the technological advancements that have been made since 1970. In the never-ending pursuit of speed, consistency, and reliability, Pro Stock racers have left no stone unturned

One thing that’s important to remember: While a ’70 Pro Stock car might seem primitive, in terms of performance, these were the most sophisticated race cars available, and the participating manufacturers often threw the full weight of their engineering programs to provide an edge against the competition.

The following is a comparison of the first and most recent Pro Stock cars.

CHASSIS
1970: By rule, the first Pro Stock cars were required to use a stock chassis, and typical modifications included the addition of subframe connectors and a roll bar or roll cage, made from mild steel. The roll bar was required, although many competitors went with a simple three-point system, while a full roll cage was optional in year one. The only other significant modification that was permitted was a slight alteration to a firewall in order to fit a big-block engine.

2020: Today’s Pro Stock cars are built around a round tube (4130 chrome moly) chassis with a single frame-rail design and an integrated four-link rear suspension. Each chassis must conform to SFI specifications, including a Funny Car-type roll cage. Additional features include front strut mounts, a 360-degree driveshaft loop, a rack and pinion steering mechanism, and fabricated rear-end housing.

1970: The engines of 1970 were very much production-based, using OEM blocks, cranks, cylinder heads, and other crucial components. The engine that Jenkins used to win the Pomona season opener featured a 512 casting 427-cid Chevy block, aluminum cylinder heads, an aluminum Weiand tunnel-ram intake manifold, and a pair of 750cfm Holley carburetors. It likely produced in the neighborhood of 600-650 hp measured at the flywheel.

2020: The days of a Pro Stock engine using a single factory-produced part are long gone. In 1982, a major rules change ended the era of weight breaks in favor of a much simpler standardized format that limited all engines to 500 cid with a minimum weight of 2,350 pounds. A current 500-cid big-block Pro Stock engine is a technological marvel. The current crop of GM cars use the short deck DRCE4 (Drag Race Competition Engineering) engine block fitted with a host of CNC machined parts, including cylinder heads and intake manifolds. A major 2016 rules revision meant the end of carburetors in favor of electronic fuel injection (EFI) and an electronically controlled 10,500 rpm limit. A modern Pro Stock mill makes in excess of 1,400 hp.

INDUCTION
1970: For more than 40 years, a Pro Stock engine was fed by a pair of four-barrel carburetors, typically a Holley Dominator design. Pro Stock teams spent a large portion of their research and development budget on carburetor development. The aluminum tunnel ram intake manifolds used in 1970 were later replaced by fabricated sheet metal, which is also a key component in overall performance.

TRANSMISSION
1970: In 1970, stock meant stock, and that included the gearbox. Jenkins favorited a Borg Worner Super T10 four-speed transmission hooked to a Hurst vertical gate shifter. In the early days, transmissions were not clutchless, meaning that the driver had to use the clutch pedal to make each gear change. That changed in the early 1970s when the Lenco planetary design took over.

2020: With huge gains in horsepower, clutches have changed dramatically since the 1970s. Today’s units feature a multidisc design (limited to three by rule) and are much more compact with a diameter of either 6 or 6.25 inches. They also feature multiple adjustments to help control launch and power application downtrack.

BODY
1970: Stock and unaltered steel bodies were the order of the day in the early years of Pro Stock with modifications limited to the addition of a fiberglass hood, deck lid, and splash pans. The most prominent alteration was the addition of a hood scoop to cover the carburetors and intake and provide fresh air into the engine. Many teams also took the liberty of sandblasting or acid dipping bodies in an effort to lose weight. Early Pro Stock cars were also equipped with glass windows.

2020: Sheet metal has long been replaced by specially designed carbon fiber bodies that must conform to a very specific body template. Windshields and windows are now a polycarbonate Lexan material for both weight and safety. Hood scoops disappeared in 2016 when the electronic fuel injection rules were introduced.

1970: The Camaro that Jenkins drove in 1970 looked much like the same Camaro one might see in a Chevrolet dealership with two fully upholstered seats, carpeting, and a stock-appearing dashboard. By rule, early Pro Stock cars were also required to have fully upholstered door panels.

2020: Relatively speaking, a modern Pro Stock interior is barren compared to their 1970s counterparts. The passenger seat long ago disappeared along with the factory dashboard and upholstery. Those features have been replaced by a maze of wiring, air lines, ignition boxes, and other crucial components that are not located inside the driver’s compartment. Driver’s seats are custom-fitted to each driver to provide maximum protection in the event of an accident. 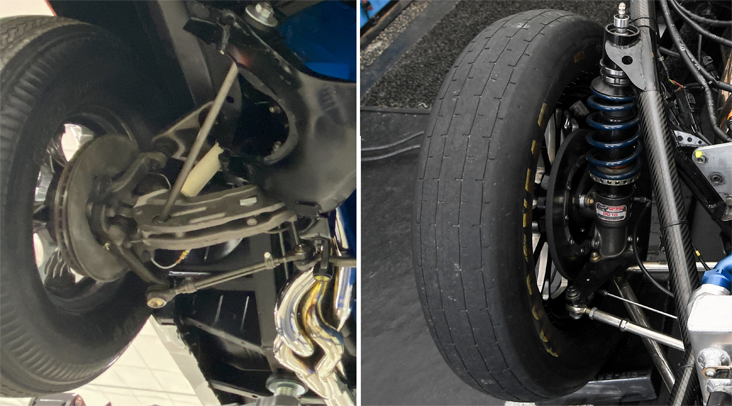 1970: Jenkins’ ’70 Camaro was equipped with a simple set of Lakewood traction (slapper) bars that helped prevent the rotation of the rear end housing and thus improved traction. Mopar Pro Stock cars favored a pinion-snubber setup. The cars were required to use a stock front suspension.

2020: Although some teams have experimented with alternative designs, including three-link and torque-arm suspensions, the four-link has been the design of choice for Pro Stock since the early 1970s. The advantage to a four-link is adjustability with multiple settings that can help improve traction, ride height, weight transfer, and a number of other critical factors. Wheelie bars are also an integral part of a modern-day Pro Stock car’s rear suspension. Even a slight adjustment to wheelie bar height can have a dramatic effect on the performance of a Pro Stock car. Today, cars are allowed any type of front suspension design, with the only limitation being on active control of shock dampening.

2020: The stock-type rear ends have long been replaced by a fabricated housing that increases not only strength and reliability but also allows for easy gear changes. Typically, teams will have multiple rear-gear carriers available and can make changes to final drive ratio in minutes.