Who will make the NHRA Countdown to the Championship?

The NHRA Mello Yello Drag Racing Series heads to the Chevrolet Performance U.S. Nationals with 21 racers chasing down 11 spots in the NHRA Countdown to the Championship. We go class by class to see who has a shot at making it into the Countdown.
22 Aug 2019
Jacob Sundstrom, NHRA National Dragster Associate Editor
Feature

The NHRA Mello Yello Drag Racing Series heads to the Chevrolet Performance U.S. Nationals with 21 racers chasing down 11 spots in the NHRA Countdown to the Championship. Some (okay, many) of those racers have a better chance of snagging a spot in the playoffs than others, and I’ll be taking some time to break down their odds as we get ready for the world’s biggest drag race. 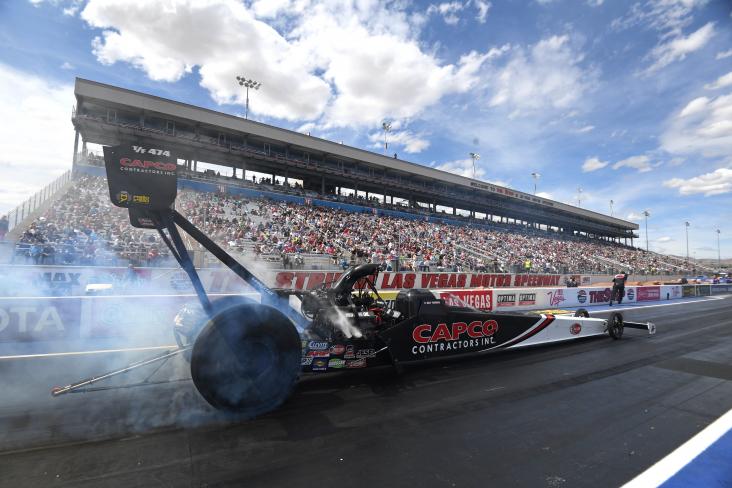 We’ll remember the winners, but the marquee event at the 2019 U.S. Nationals may be the battle for the final three spots in the Top Fuel Countdown field. Austin Prock, Richie Crampton, Terry McMillen and Billy Torrence are the three racers with an opportunity to make the Top Fuel playoffs. Prock holds the edge, a full 125 points clear of Palmer and driving the best version of his Montana Brand / Rocky Mountain Twist Top Fuel dragster.

He is at little risk of missing the dance. McMillen and Palmer, both of whom have struggled after fine starts to the season, look a lot like The Orca from Jaws. Torrence, on the other hand, has looked perfectly sharky since he got into the water in earnest in 2018. Torrence is 41 points behind McMillen and will chase the Amalie Motor Oil racer from the No. 12 position; it’s possible for Torrence to get within a round (30 points at the U.S. Nationals) through qualifying excellence, though not likely.

It is probable, though, that Torrence will go two rounds further than McMillen and Palmer, which is all the Texan must do in order to make the Countdown. He also must pick up one more point in qualifying than McMillen to get the job done, in the spirit of completeness. Torrence has had the best dragster over the last six races according to NHRA Power Rankings, thanks to a 3.78-second average elapsed time, an 80-percent Success Rate and a .0797-second reaction time.

No one has been on the same level as Torrence (other than his son, of course), but Palmer and McMillen have had two different problems. Palmer has generally not been quick enough to snag a solid qualifying spot. He averages a 3.843-second elapsed time, the slowest of any full-time competitor. That puts him in a tough position on race day, leading to first-round exits. McMillen doesn’t have a speed problem (3.795-second elapsed time) so much as one of consistency (47-percent Success Rate).

That combination has the pair likely to miss the Countdown for the first time in a couple of years as Torrence made a heavy push and Austin Prock joined the category. 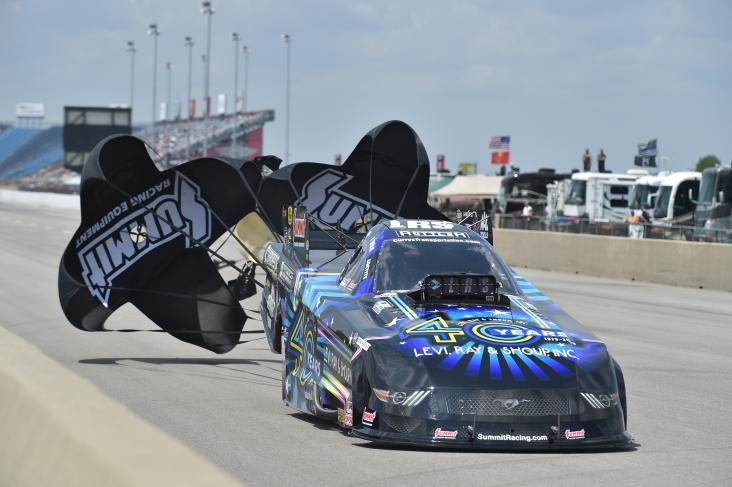 Tim Wilkerson leads Cruz Pedregon by 143 points. There are 195 points available at the U.S. Nationals. Both racers will receive 15 points for making a run. That gives Pedregon 180 points to work with. If they both qualify, Pedregon only has 150 points available. Can’t wait to see the 30 for 30 about this comeback. 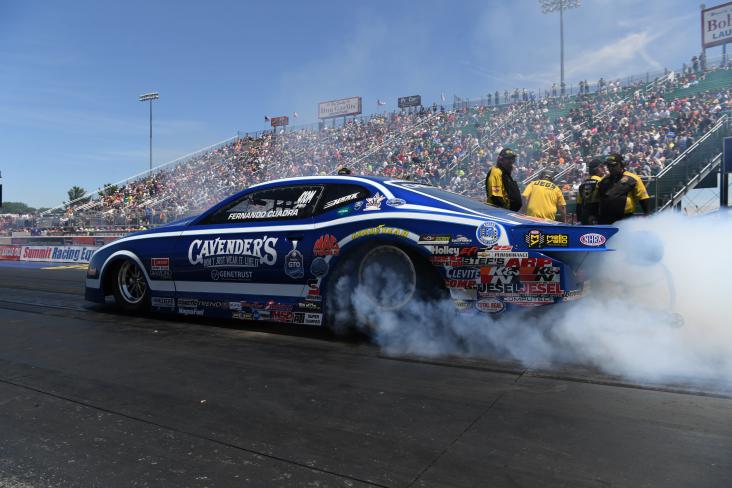 There are a lot of racers still in the hunt for the final spot, but I’m going to focus on the three racers who are really battling for it: Kenny Delco, Fernando Cuadra Sr. and Val Smeland. Delco holds the lead with 363 points, three more than Cuadra and 12 more than his teammate, Smeland.

Cuadra has the best car of the three by my estimation but has not enjoyed any good fortune during his 2019 campaign. He averages a 6.607-second elapsed time overall; that’s not spectacular, but it’s just off the class average. Cuadra’s average drops to an abysmal 6.620 on race day, which has to be cleaned up for at least one weekend if he hopes to reach the Countdown.

Delco’s overall average is a thousandth better than Cuadra’s, he has similar race day problems and the two men have similar reaction time averages. The difference comes in the variance. Delco tends to live in the .050-something range, while Cuadra may be the wildest of all the wild cards when he pulls up to the starting line. That’s great for someone in the entertainment business (me) but probably not the trait you want as a professional race car driver. Still, it’s fun, and I like fun.

Smeland is a hundredth slower than his teammate and is the dark horse in this conversation. If he makes the Countdown, it’s an upset – we like upsets! 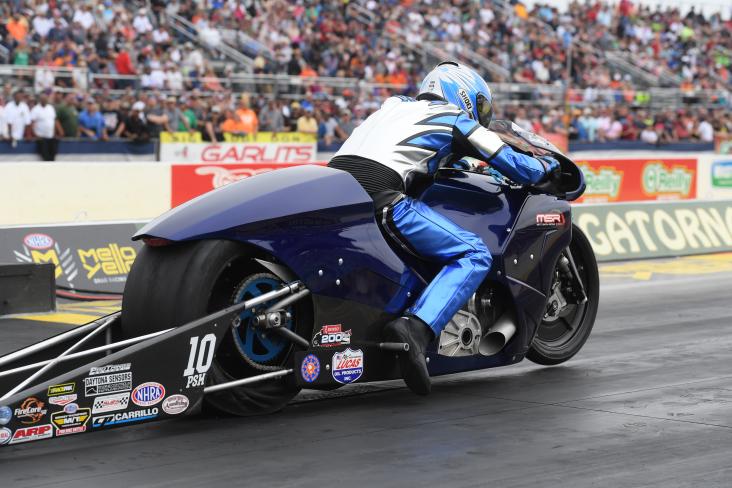 The two-wheel class got a month off to work [what’s a vacation?] before heading to the U.S. Nationals. Only the top four racers have officially clinched their spots and everyone from 11th to 15th is still in the hunt for a playoff spot. That means that technically Steve Johnson, who has struggled to get to the track, could make a miracle run for a playoff spot.

The battle for the Countdown, in truth, runs tightest from Angie Smith to Joey Gladstone. It’s unlikely Smith, Ryan Oehler, Hector Arana Sr. or Angelle Sampey get bumped … but stranger things have happened. That leaves 10th place racer Jerry Savoie as the gatekeeper fighting against Scotty Pollacheck and Gladstone.

If it is a three bike battle (and it’s at the very least likely a two-bike push from the bottom to steal spots), it’s tough to imagine Savoie giving up his spot. He’s fourth in NHRA Power Ranking over the last six races, just behind Matt Smith thanks to a great average elapsed time and stellar reaction time average. That doesn’t mean Gladstone and Pollacheck can’t swing around the ninth place racer, it just means they have more work to do.

Both riders, though generally excellent, have been let down by their equipment for the better part of 2019 (or longer, frankly). Pollacheck is averaging a 6.959-second average elapsed time and a 62.5 percent Success Rate and it’s hard to imagine that’s at the hands of one of the best riders in the category. Gladstone isn’t fairing much better with a 6.938-second e.t. average and a 50-percent Success Rate. Pollacheck has looked better since over the past few races; the Oregon-based rider has won at least one round since the Norwalk event. It may be too little too late in terms of making the playoffs, but there’s reason for optimism as the season progresses.