Talk about a leap of faith. Vic Penrod entered the final week of 2019 as the leader in Super Stock, but before it became official, there was one significant hurdle to clear. Heading into the Auto Club NHRA Finals in Pomona, only Kyle Rizzoli could pass Penrod, and he had to win in order to do so. Uncertain of their fate, Penrod and his wife, Shelly, threw caution to the wind and made the decision to drive more than 1,200 miles from their home in Oklahoma to California in preparation for Monday’s championship awards ceremony in Hollywood. The Penrods made it to Pomona just minutes before Rizzoli lost to Dan Fletcher in Sunday’s semifinal round.

“We didn’t have a choice because my wife absolutely will not fly,” said Penrod. “In order to get to Pomona in time for the banquet, we left on Saturday morning. It was kind of a fairy tale the way it worked out because we got to Pomona about 15 minutes before the semifinals, where Kyle lost to Fletcher. We were sitting in the parking lot across from the track listening on the radio when it happened. Within minutes, I got a phone call from [Division 4 Director] Trey Capps to tell me I was the champion. He didn’t know I was right outside the gates.

“I know it was a big gamble, to drive there, but I felt like we had to do it,” Penrod said. “We knew that we might have to turn around and go home without a championship, and for a while I thought that might happen. Let’s face it. Kyle Rizzoli is a bad man. Let’s get that out there right now. If he’s got a chance to win, it’s usually a done deal. I just had to trust that God had a plan for me.”

Heading into the 2019 season, Penrod’s most notable achievement was a win at the 2006 Dallas event. He was also a runner-up in the South Central Division points battle a year ago, but the 2019 season far exceeded anything he’d ever experienced before. On the strength of three wins and a runner-up, Penrod scored 637 points, which was more than any of the other 812 who competed in Super Stock this season. Driving his familiar ’69 Camaro, Penrod opened his season with three solid finishes in divisional competition and then ventured to Chicago, where he won the Route 66 NHRA Nationals. Since the Chicago event includes the JEGS Allstars race, it’s often considered one of the most difficult events to win, but Penrod had little trouble advancing to the final, where he defeated reigning world champion Justin Lamb.

“At that point, the last thing I was thinking about was a championship,” said Penrod. “We went to Chicago for the JEGS Allstars, but that didn’t pan out. On Sunday, I was just happy to win a national event and get a little extra money. I won in 2006 driving Bob Dennis’ car, but this was the first time I’d won on my own. It was just me and my son, Logan. It was also the first race I’d won since my dad passed away, so it was really emotional.” 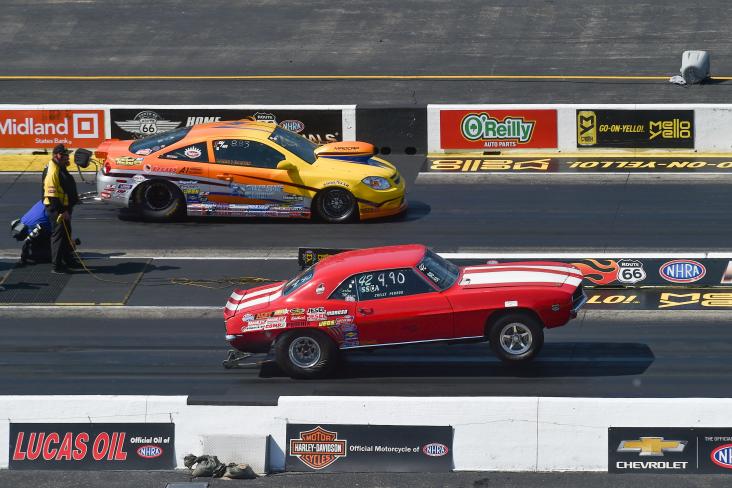 Fueled by his confidence-inspiring win in Chicago, Penrod emerged as a championship front runner following a runner-up a week later at the Menards NHRA
Heartland Nationals presented by Minties in Topeka. A few weeks later, another win in Topeka, this time in the first leg of the Division 5 doubleheader, provided another boost. For all his midseason success, Penrod’s season was far from perfect. He went to the Chevrolet Performance U.S. Nationals and failed to qualify and lost early at the AAA Insurance NHRA Midwest Nationals in St. Louis.

“When I won in Topeka in July, that’s when it all started to sink in,” said Penrod. “Indy didn’t work out too well, but that deal was more about Bob Dennis than anything else. I drove his car, and he’s 79 years old, and I just wanted him to be able to race in Indy at least one more time. Honestly, it didn’t hurt my score because I already had a win and a runner-up at national events by that point.” 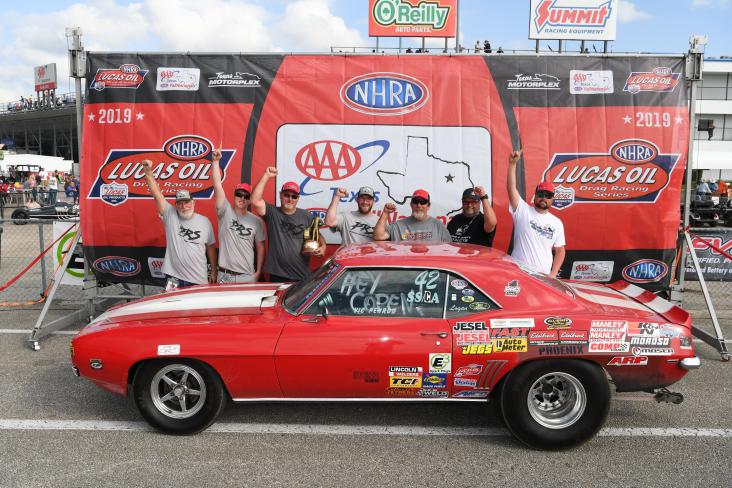 Penrod was chasing Rizzoli in October when he capped off his points-earning season with a second national event win at the AAA Texas NHRA FallNationals in Dallas.

“The semifinals in Dallas was pivotal because I was in the lead by one point,” said Penrod, whose biggest supporters include his wife, Shelly; son, Logan; daughter, Carlee; her husband, Justin; and grandson, Copen. He also credits Bob and Buggs Dennis and longtime friend Sammy Mathis for their help. “Winning the race was just icing on the cake. It was special because that’s my closest event, and we had friends there. I’d never been in this spot before, chasing a championship, so I didn’t know what to expect. I can’t explain what happened this year other than being more relaxed and a lot less nervous. I just put my faith in God, and it worked out. My only regret is that my dad didn’t get to see this.”