Jim Dunn knows that magic happens at the Chevrolet Performance U.S. Nationals. The veteran car owner has won the race before, but faces a stiff challenge to put his driver, Jim Campbell, into the field of one of the sport's quickest-ever fields.
01 Sep 2019
Phil Burgess, NHRA National Dragster Editor
Feature

Jim Dunn knows that magic happens at the Chevrolet Performance U.S. Nationals. The veteran car owner, who first came to Indy in 1964 with a Chevy-powered fuel dragster, has witnessed how incredible things can happen at “the Big Go” in his more than 60 years of racing. 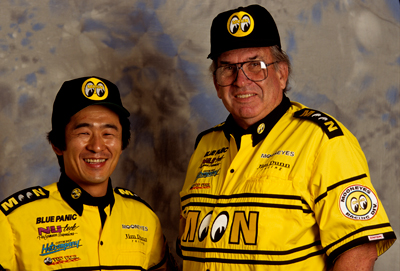 As a driver, he just missed winning the sport’s most prestigious race in 1981, where he lost in the final to the world champ Blue Max of Raymond Beadle. After he retired from the cockpit, he tuned his protégé, Japanese national Kenji Okazaki to a runner-up at the ’93 event behind first-time Indy winner John Force, who got a bye after a fuel leak on the starting line, the unnoticed result of a broken blower belt in the semifinals.

Four years later, Dunn and Okazaki turned the tables on Force to win the 1997 Big Bud Shootout and two years after that, with Frank Pedregon now driving, Dunn finally won Indy. That was 20 years ago but it still brings a smile to his face.

“That was definitely a highlight of my career,” said Dunn. “I’ve been coming here a long time and always seem to do well. People ask me why and it’s because even though I’m on a budget, when I come here I open it up – new heads, new blowers. I come like I’ve got a million-dollar budget and I will [mess up] your ass if I get the chance.”

Entering the final day of qualifying at this year’s event, Dunn could use a little of that Indy magic. Driver Jim Campbell is not qualified with two session remaining and facing a stiff 4.06 bump that very likely will drop into the three-second range before it’s all done.

Dunn’s Cattleman’s Cut-backed team has battled fuel-system woes through its first three runs that have netted a best of 4.16. While Campbell has a three-second run to his credit at this event in 2016 in a different car, he’s yet to find the threes in the Dunn car, but the car runs 4.0s all day long all season long, giving them hope.

“The bump’s a 4.06 and if we could have done it, we’d have already done it,” Dunn says. “I think I know what the problem is, but I won’t be sure until we get to run again. We’ve replaced a lot of the parts and working with the fuel flow, but we’re still having problems dropping cylinders. We'll see. If we don't make it, we'll go down swinging."