Troy Coughlin Jr. wants to return to Top Fuel—sooner, rather than later

Troy Coughlin Jr. won his first national event three months after his 19th birthday. He lifted his second Wally at the world’s biggest drag race: the U.S. Nationals. His father, uncle, and grandfather long ago achieved legend status, and the JEGS logo is ubiquitous.

Coughlin’s name carried weight everywhere he went, so long as everywhere included the NHRA Mello Yello Drag Racing Series and the surrounding circus. He never describes it as a burden because the requisite privilege that comes with “JEGS” is something he understands. It’s not enough to get him the keys to a Top Fuel dragster, but you picked up this glossy magazine and already had an opinion on someone who could still make a 30-under-30 list. 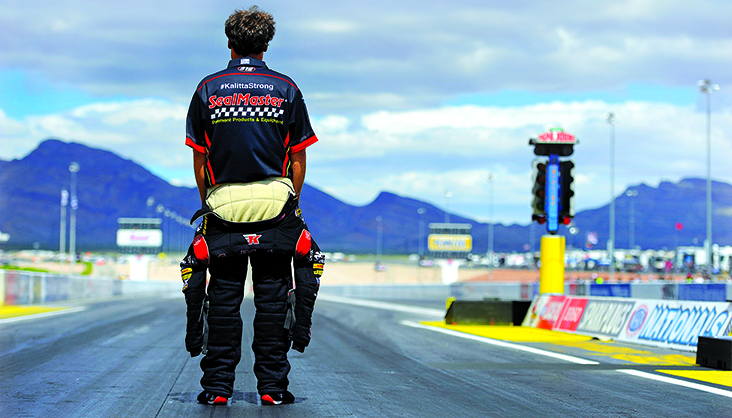 He wanted to race Top Fuel. Sorry, he wants to race Top Fuel. He got his opportunity in 2017 when Kalitta Motorsports came calling. The opportunity did not check all of Coughlin’s boxes, but it checked the most important one: He got to sit in the seat of a dragster that burns nitromethane and goes more than 300 mph, 1,000 feet at a time. He does not regret the decision to accept Jim Oberhofer’s offer, and even those with the tremendous benefit of hindsight display extreme myopia by expecting him to do so.

Tony Schumacher remains sidelined after rewriting every record in the history books. Leah Pritchett continues to hustle to fill the side of her dragster with sponsorship decals. John Force himself never takes his next ride in his Funny Car for granted. Coughlin knew the opportunity in front of him may never come again — he hopes he was wrong about that; he plans to be wrong about that — but it’s silly to blame him for making an aggressive move by joining a major team with a major sponsor.

He got his license in a Don Schumacher Racing dragster in 2016 and, by all accounts, drove well. He got limited seat time ahead of the 2017 campaign and did not receive as much opportunity to test on Mondays after national events as he would have liked. He knew what to expect when stepping into the car and, as such, did not complain so much as recount all of that as fact. Coughlin struggled to keep the car in the groove at times, and the Kalitta Motorsports Top Fueler was one of the least consistent in the series while he filled the seat. 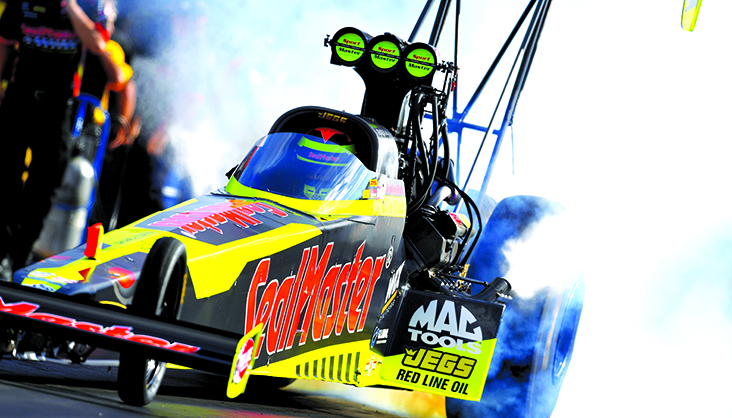 The criticism that followed came publicly and privately, which meant it eventually found its way to public channels. The tight-knit world of drag racing found its seams stretched as one of its newest stars came under siege in a way few were accustomed to. Coughlin continued to stand outside the Sealmaster trailer and sign autographs as if nothing was happening.

“You deal with fans and criticism from the internet, criticism from family and from friends,” said Coughlin. “It’s just part of the deal. Some criticism sucks, and it weighs on you for a while. But in the end, it builds you. You have to view it as a stepping stone to completion, you can’t just let it weigh on you. You have to eventually make it a positive, otherwise it’ll eat at you for so long and just be a constant negative in your life.”

A press release at midnight the week before the 2017 U.S. Nationals announced Coughlin resigned from his post at Kalitta Motorsports. That bombshell took the drag racing world by storm and invited opinions from everyone with access to an internet connection. 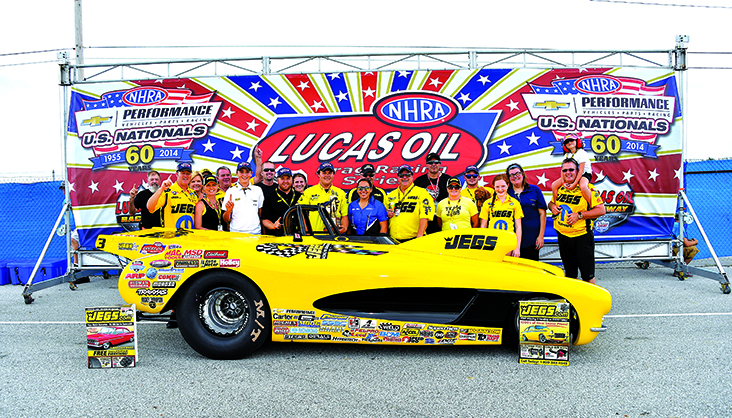 Coughlin entered the U.S. Nationals in Super Gas, so there was no break in his schedule. He isn’t the sort of person who takes breaks, something his grandfather is quick to point out. Drag racing is the thing that propels him from point A to point B to ... wherever he ends up next. That directional thinking makes him excellent, focused, and — at times — all-consumed by the exhaust billowing off the asphalt in the staging lanes.

“My grandfather says this thing sometimes: ‘Put the clubs down,’ ” Coughlin said while standing outside Erica Enders’ latest winner’s circle. “I’m not that good at that. Sometimes, you need another voice to kind of put you on that right path.”

There will never be a shortage of voices for Coughlin. His father, Troy Sr., won the Pro Mod championship the year everything unraveled in Top Fuel. His uncle, Jeg, entered the final race of the 2019 season hunting for yet another Pro Stock title. The winning is one thing, but Coughlin knows he can lean on people who have his best interest at heart; that’s more than can be said for many who choose racing as a profession.

“I think my advice to him — when he got into the Top Fuel car — was to try and pick one person you have a lot of faith in and try and lean on them,” said Jeg Coughlin Jr. “I think, at some point, you can have too many ideas and too much input. You have to have a really good filter to sift out everyone’s ideas and to focus on one common idea and one common goal.” 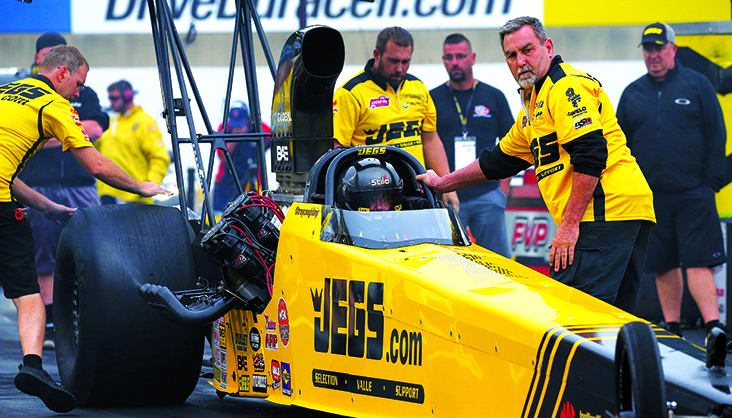 That one common goal is getting back into a Top Fuel car. Coughlin turned 29 in July and will return to Rich McPhillips’ Top Alcohol Dragster to chase a championship in 2020. He is not the only person looking for a Top Fuel seat in 2020 or 2021 or ... well, in the future. No two journeys are the same, and Coughlin has already done more winning — and at bigger venues — than many of his peers. But he has done it all so early that satisfaction isn’t possible. Not yet.

“I’ve had a blast so far. It’s all about the journey, you know. These are great people that I’ve worked with and several different teams I’ve had a chance to drive for,” said Coughlin. “I’m always going to strive, for sure. Strive for more, at least.”

Striving for more doesn’t look the same as it does for other athletes. Coughlin can’t bench press his way to a faster car, and he can’t run enough laps to go 300 mph. Trusting the process doesn’t quite function the same way in professional motorsports, where Coughlin’s daily routine features making phone calls and sending emails to prospecting clients with the hope that they want to billboard the side of a Top Fuel dragster. 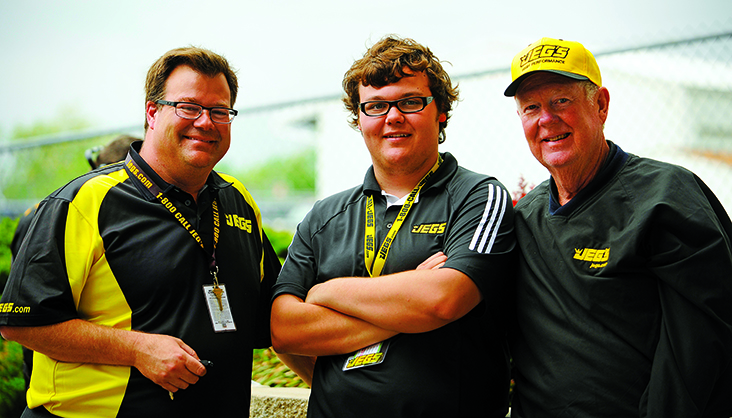 He does that in addition to his daily duties at JEGS, which stretch into a few different areas but revolve around marketing; and then there’s racing. The confidence that running the Top Alcohol Dragster car with the McPhillips team gave Coughlin can be overstated, but he noted it felt good to be reminded that he “[…] knew how to drive one of these skinny cars” after his time in the Kalitta Motorsports Top Fueler.

He averaged a .067-second reaction time, dead on the class average, and only turned on one red-light. Yes, the red-light came at an inopportune time — the final of the U.S. Nationals — but there’s not exactly a good time to leave early (in a drag race, anyway).

“It keeps me sharp, that’s for sure,” said Coughlin. “It keeps me hungry and keeps my spirits up, you know? I like racing with the McPhillips boys. They all work so hard. Each and every one of them have a great work ethic. They’re just amazing. It’s very contagious. It’s very inspiring, and I wish I could just take them with me to a Top Fuel car if I had the money to go do it. 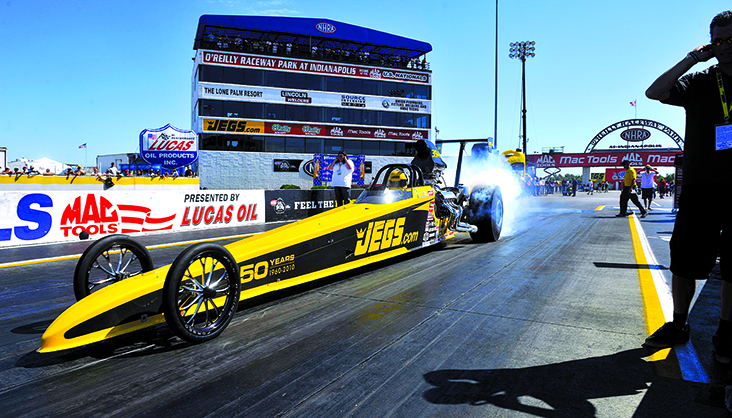 “Those early runs in the Alcohol car told me that I could be competitive again, you know, because they were good runs, and they were fast runs. We were qualified like fourth or fifth at our first race or two and, you know, it just says, ‘Hey, you’re competitive and you’re in a car — one step closer to where you ultimately want to end up.’ ”

He wants to end up sitting in front of an engine that creates the power of 11,000 horses and eats nitromethane faster than Ed Orgeron dispatches crawfish. Reaching the pinnacle once only made him hungrier to get to the top again, a feeling that only a handful in the pits can relate to.

“I think it’s a big respect thing,” said Coughlin. “You have to respect every aspect of a nitro car: the expense, the speed, the sound, pretty much every sense that you can imagine, and that’s something that I have a lot of gratitude for now. This isn’t just something that we have on jack stands in our shop. I don’t think I ever really thought that going into it, but it’s different now, and the respect and gratitude I have for all of these experiences is different.”

The situation and circumstances around Coughlin have not radically changed in the two years since he last drove a Top Fuel car. He changed because he’s an adult in his twenties with enough self-awareness to keep moving forward. Coughlin’s résumé speaks for itself, but when he’s asked about it, he’ll tell you he’s not done yet. Not even close.