Tommy Johnson Jr. shares a few things in common with legendary nitro racer Don “the Snake” Prudhomme, not the least of which is a birthday, shared on Saturday of the Denso Spark Plugs NHRA Four-Wide Nationals. Johnson turned 51, Prudhomme 78.

They two raced together from 2004-07 when Johnson wheeled “the Snake’s” Skoal-sponsored Funny Cars and both raced nitro cars for 30 years. Prudhomme’s driving career began in 1962 and ended in 1994, but Johnson, who celebrates his 30th year of nitro racing this season and marks his 450th event in competition this weekend (for the record, Prudhomme's number is 279), and T.J. clearly still has years to come, but he looks back in wonder this weekend at the road he’s taken to 18 career wins, a road that began long before he had a driver’s license in his Iowa homestate. 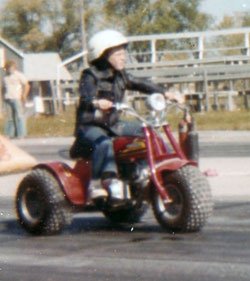 “I hate to think how many laps I’ve made since I started racing as a kid, starting from riding that three-wheeler as a kid to bracket racing, Super Gas, Top Alcohol Funny Car, Top Fuel, and, of course, Funny Car,” he reminisced. “It’s probably more than 5,000 runs.

“What am I most proud of? I guess it’s longevity,” he assessed. “You look at all the guys who have come and gone; there’s not a lot that come and stay.”

Point in case. Looking back at Johnson’s debut at the Phoenix event in 1989, at the wheel of the Gunite Express Top Fueler of Dave Settles and Frank Cook, only John Force is also still driving (though former drivers Connie Kalitta, Mark Oswald, Jim Dunn, and Paul Smith are still involved on the tuning/ownership side).

“When I used to race against Joe Amato, we didn’t hang out or anything,” he notes. “He was Joe Amato and I was just a kid, but recently he and I talk a lot, about my honeymoon, about our wives. Somehow, somewhere along the line I graduated to that group where now I’m reminiscing with legends. That’s pretty cool.

“How the hell did that happen?” he laughs. “I don’t feel that old, but it’s been a long time. It’s not been easy. There have been a lot of times where I didn’t know if I could or would keep going.” 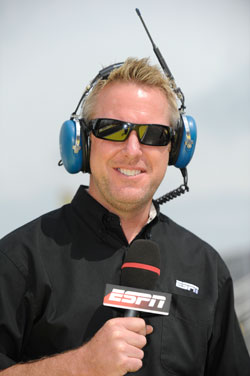 One of those times was a five-year stretch, from 2009 through 2013, when he didn’t have a fulltime ride. He’d left the Prudhomme camp in 2007 and drove Kenny Bernstein’s Monster Funny Car in 2008, but then things dried up. He kept himself busy, serving a color analyst on NHRA TV programming and got his foot in the door at Don Schumacher Racing as a track specialist and parts purchaser until Terry Chandler stepped up in 2014 and providing funding for the Make-A-Wish Funny Car that Johnson still drives.

He kept his driving skills sharp by wheeling a variety of cars, both in the United States and overseas.

“I hate that I missed those five years, but at the same time I was able to do something no one else has done: I won Top Fuel races in six countries: the U.S., Abu Dhabi, England, Finland, Sweden, and Australia. That was a bright spot to sitting out those years. Even as a kid I wanted to race in Australia and overseas, and I got to do it.” 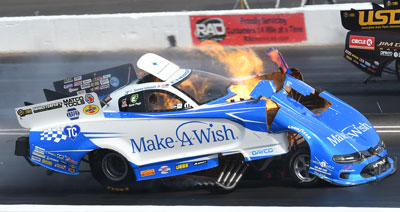 Johnson’s 2019 has been a real mixed bag leading up to race No. 450. He went to the semifinals at the season opener in Pomona but was stopped in round two in Phoenix and Gainesville, both sites of massive, body-breaking explosions.

“That’s been frustrating,” he admitted, “because they were three totally different things. The first one in Phoenix was caused by a broken axle. The second one there was an ignition misfire. In Gainesville, it was a broken intake valve seat. I almost wish it was one problem, because you can find and fix that. You can’t foresee any of this stuff and I’m telling you, that one in Gainesville hurt, more than the other two combined. It took me a second to realize the body was gone and it covered me with oil. It definitely dazed me.

“Here’s how bad my luck is. In Gainesville we put on a safety shutoff that is supposed to shut it off at 1,000 feet no matter what. We were trying to zero in one right length. Moving the distance around, and that run it shut off 20 feet early and I lost by seven ten-thousandths [to teammate Jack Beckman].

He’s hoping that his birthday, and his past successes in Las Vegas, will turn his luck around. Last year, he made the quickest run of the final round of the Four-Wide, but red-lighted by .008-second.

"We always seem to do really well at Vegas,” he noted. “I’ve won here a couple of times in the past [2001, 2017], and we did really well last year but felt like we let one get away from us; we should’ve won. So, looking forward to getting a little revenge from last season.”