Robert Hight surprised everyone -- including his crew chief Jimmy Prock and team owner John Force -- with a half-track smoky burnout in the Funny Car final at the Auto Club NHRA Finals but he had some clear goals with the unprecedented-in-recent-times tire smoker.
21 Nov 2019
Phil Burgess, NHRA National Dragster Editor
Feature

Robert Hight wanted to give the fans a little something extra at the Auto Club NHRA Finals to celebrate his impending coronation as Funny Car champion. The title was one informality away: a clean pass down the track in the final round against Jack Beckman without crossing the centerline or hitting the guardwall.

With his long love of Funny Car class, he knew what he wanted to do: one of those long, smoky burnouts that had made Funny Cars fan favorites since the late 1960s.

Problem is that those burnouts have been –- to put it mildly –- frowned upon by crew chiefs since the early 2000s as being tune-up destroyers due to the amount of heat they put in both the clutch -– as the driver moderates the back-up speed -- and the engine that might upset the delicate balance of their tune-up. The routine needs to be the same every time, from the length of time the engine is running to the length of the burnout itself.

But Hight’s motives were two-fold.

“I wanted to do a big ol’ burnout for the fans; it’s something you dream about and we don’t get to do them anymore because of how finicky these cars are,” he said. “I also was hoping that we could back up and make a great run and show the crew chiefs that long burnouts don’t hurt anything, and we could go back to doing them because the fans love them.”

Hight, who has been working on Funny Cars since 1995 -– almost a decade before he started driving –- had seen his boss, John Force, perform plenty of crowd-pleasing burnouts in his tenure and ached to unleash one of his own. 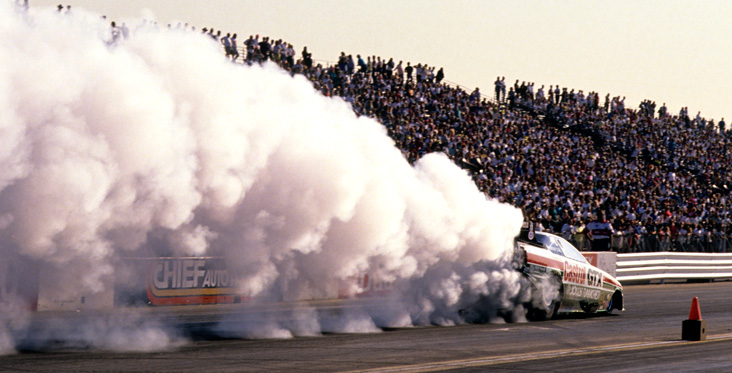 But it's a different era in many ways.

“Back then we had real rubber tires that really smoked -- these synthetic ones don’t smoke as much –- and back then the data recorders weren’t able to store as much data as they do today, so we wouldn’t turn them on until the car was staged," he recalled. "We’d use a stopwatch to keep track of how long the car was running before they staged."

As the finalists were towed into position, no one knew what was coming -– not even Hight.

“I actually didn’t think about doing this until right before we started the engine,” he said. “I told Jimmy [Prock, crew chief] to start first -- normally we start second because we have one of the quickest routine and I didn’t want to screw up Jack –- and he just looked at me and said, OK.’ He had no idea what I was going to do. John [Force, team owner] didn’t either.”

Hight cracked opened the throttle on the Auto Club Camaro and kept it open, and smoked the tires for several hundred feet as the fans roared in delight.

“It was awesome,” raved Hight. “There was so much smoke inside the car. It was cool.”

Then things went wrong. Not disastrous enough to cost him the championship, but he did lose the chance to make a run and a point when the engine suddenly died as he began to back up from the burnout. 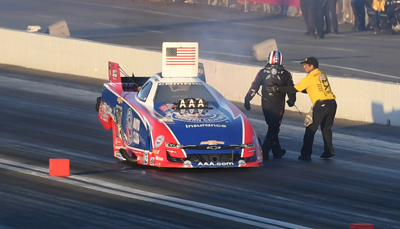 “I used up so much fuel doing that and between that and me stopping so fast and starting to back up, the fuel ran to the front of the tank and the pump couldn’t pick it up,” he said. “I heard it start to rev up as it was leaning out. Usually it will run a while before it shuts off but this time it didn’t; it just signed off.

“I was thinking, ‘Uh-oh, what do I do now?’ and had to climb out of the thing. The fans were going nuts. They loved it.”

And how did his tuner and team owner react to his stunt gone wrong?

“John told me it was the coolest thing he ever saw,” he said. “The worst part was when someone said that I’d kicked the rods out of it; I knew that didn’t happen because as a driver you can feel that. I’m so proud of my team because we made 188 runs this year and never once kicked the rods out or oiled the track, so when they thought that had happened -– on the last run of the year, on the burnout because of the driver -– they thought I’d ruined the streak, but I didn’t.

“I was disappointed because, first, I wanted to make the run and maybe get our [career-best] seventh win of the season and win No. 52 for me. I guarantee you we could have run better than 3.92 [Beckman’s e.t.] in the final.

“Also I lost the chance to prove to the crew chiefs that long burnouts don’t hurt anything. I think it’s true –- we might have to make adjustments in the fuel system so that the engine stays cooler and the way the driver works the clutch –- but I’d sure love to see it.”