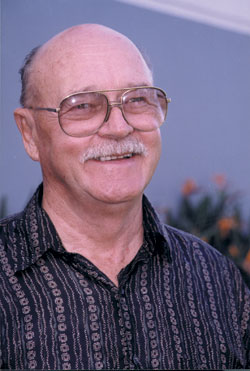 The sport lost another friend yesterday with the passing of former Funny Car owner/driver Ray Alley, at age 86 after a lengthy illness. Alley’s was a name that we all knew, whether he helped you with your racecar through his long-running Engine Masters business or if you grew up watching him drive Funny Cars in the late 1960s or early 1970s. Maybe you knew him as the guy who gave future four-time Funny Car world champion Kenny Bernstein his Funny Car ride in 1970 or maybe you bought RacePak computers from him in the early 1980s, watched him tune or assist scores of racers over the years, or, if you’re a newer fan, who knew him in the early 2000s as NHRA's nitro-racing czar.

Few people probably knew Alley better or longer than Bernstein, and it was KB who I turned to yesterday to learn more about their long friendship, which began while Bernstein was in his early 20s and living in Lubbock, Texas.

“I first met Ray in 1965,” Bernstein recalled. “I had this little  D/Gas Anglia, a small-block Chevy with two carburetors and a four speed transmission, but the Torqueflite [automatic] transmission had become the craze, so I looked in the magazines -- I think it was Car Craft or Hot Rod -- to see who in California was working with them, and there was Art Carr and Engine Masters. I called Engine Masters. and talked right to Ray. He told me if I could come out to California he’d put one in for me and take me out to Lions Dragstrip on Saturday night. So a buddy of mine and me and jumped in my Pontiac towing my Anglia and came out the California. We worked at Ray’s shop for two days, put it in, went to Lions, and then Sunday morning, headed back to Texas.”

But that simple transaction, one that Alley no doubt had experienced scores of times before and would after, somehow magically connected the two. They stayed in touch through their various racing encounters. Alley bought the wild Allison-powered Big Al Ford Tudor from Jim Lytle and ran that as the P-51 Engine Masters entry. Bernstein began racing Top Fuelers in Texas for the likes of the Carroll brothers, the Anderson brothers, and Prentiss Cunningham. 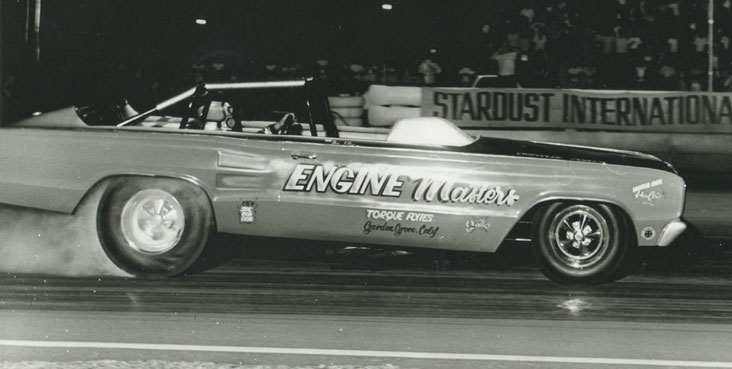 As Funny Cars came into vogue, Alley took his act under fiberglass beginning in the mid-1960s, when Funny Cars still ran under the XS designation (Experimental Stock), and ran a number of cars -- including the Dodge Charger shown above in 1967, which he ran for a few weeks as a "convertible" after the roof blew off after a stuck-throttle pass at Irwindale -- before debuting a new Plymouth Barracuda that would eventually provide Bernstein his first ride in a flopper.

“I had a weekend off and came out to California,” Bernstein remembered. “Ray was gonna race at Irwindale with that Barracuda -- we called it the purple grape –- so I just came out here to hang with him. We worked on it for a couple of days and he said, ‘Well, why don't you drive with this weekend?’ I said, ‘Are you serious?’ because I had never sat in one let alone driven one, and he said, ‘Yeah, yeah, get in there and drive it.’ We went out to Irwindale and I remember when they put the body down I said, ‘Are you kidding me? I'm used to seeing everything [in a dragster]; this is not the best.’ But on the second run I made, I think was like 7.89 at 189-190 mph, and that was pretty cool, you know? We split the cylinder and we couldn't go on that next to the rest of the day. But it was fun.”

Funny Cars would quickly become even more fun for Bernstein. Alley built a second car, a Mercury Cougar, and gave it to Bernstein to run in the southwest in 1970, which he did with his own crew, led by Ted Tholcken. (KB's name was lettered on the car as Ken back then.) Alley, meanwhile, largely stayed out west with his car, first a Mustang and then a new Dodge Charger, but was getting restless, as was sometimes Alley’s way, according to Bernstein. “He was still driving his new Charger but was getting fed up with it, so he called me to drive that, and off we went,” said Bernstein.

The duo reached their first national event final round together at the 1973 Winternationals, but Bernstein was turned away in the money run by Don Schumacher, who scored his fifth and final NHRA victory that day. Later that same year, Bernstein opened the first of what would be 13 Chelsea King pubs in the southwest and concentrated on the business in lieu of racing.

Alley, meanwhile, went off on a totally different tangent, partnering with hall of fame announcer/pitchman Steve Evans on a rocket car, which he called the Age of Aquarius (presumably named after the Fifth Dimension’s hit song). Alley tried to recruit Bernstein into the project, but KB wasn't having any of that, thank you very much.

Recalls Bernstein, “He calls me up in Texas and says, ‘I got a deal for us; we're gonna buy rocket car. [Bill] Doner and Evans have this car and it’s a good one.’ I told him I'd come out and see about it, but it wasn’t for me. I didn’t want to drive that thing. But he loved it and he did it for quite a while and ran are really fast and quick. He really enjoyed that, and that was Ray’s kind of deal; it was perfect for him because it wasn't in real competition and the car was pretty maintenance-free and he got to have some fun.”

Bernstein returned to Funny Car racing in 1977, driving a second L.A. Hooker car for the Condit brothers, but yearned for his own operation and the Chelsea King Funny Car was born. Leroy Goldstein was his first crew chief and together they won the 1979 Cajun Nationals. That success, and Bernstein’s business acumen, led to his breakthrough sponsorship with Anheuser Busch’s Budweiser brand, but he needed to perform for his new backers. So he called Ray Alley.

“In 1979 and ’80, I didn't have the right packages together, crew chief-wise, and we were our struggling awfully hard," Bernstein recalled, "so I called Ray and said, ‘I need some help, buddy. I'm gonna lose this Budweiser deal if we’re not careful because I can't perform the way we need to.’ He came running and put us right back in the game. He would always come running when I needed help. When he came on, immediately I went from hardly even been able to get down the racetrack to becoming the seventh member of the five-second club [Gainesville, 1981].”

In 1981, they also won the Mile-High Nationals and challenged fellow Texas Raymond Beadle for the championship. Entering the U.S. Nationals, they were just three rounds out of first, but Beadle beat them in round one, then they shockingly DNQ’d at the Golden Gate Nationals and World Finals, and ended up third in points, behind Beadle and Don Prudhomme. Despite their success, Alley was done … at least for now. Alley’s departure opened the door for the historically fruitful partnership between Bernstein and Dale Armstrong, who was ready to stop driving after a fiery season behind the wheel of the Speed Racer Vega.

“Ray didn’t want to travel anymore, and he recommended Dale, who he thought really wanted to work on the cars more than he did drive,” Bernstein recalled. “We knew he’d be a good crew chief because he tuned all of his own cars and was so far ahead of everyone in the alcohol classes that he almost went off and hid, and he had the Speed Racer running as good as anyone with a very limited amount of money. Ray talked to Dale first, and he was interested, so I talked to Dale and said, ‘This feels good, looks good, smells good -– let’s do it.’ “ 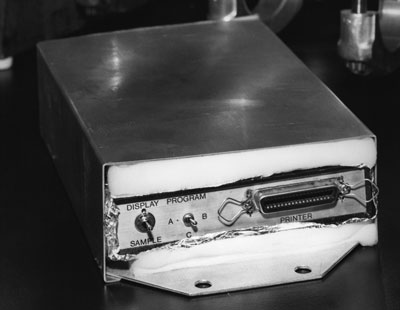 Alley stuck around though, and as Armstrong and Ron Armstrong (no relation) developed a data recorder, Bernstein brought Alley in as a partner to handle sales and marketing to popularize the use of “computers" on cars and, well, we all know how that turned out for the sport.

Alley was in and out of the spotlight for the next two decades, but it was his crew chief role on Bob Vandergriff Jr.’s dragster in the late 1990s that put him back in the limelight, and when NHRA came looking for an experienced and knowledgeable nitro veteran to oversee the Top Fuel and Funny Car classes, with Bernstein’s urging, NHRA hired Alley.

“He was a lot like Armstrong,” said Bernstein, in what is perhaps the ultimate compliment one could give a nitro tuner. “He really understood what made cars go. He knew the mechanical side of everything. He had a lot of a lot of great ideas." 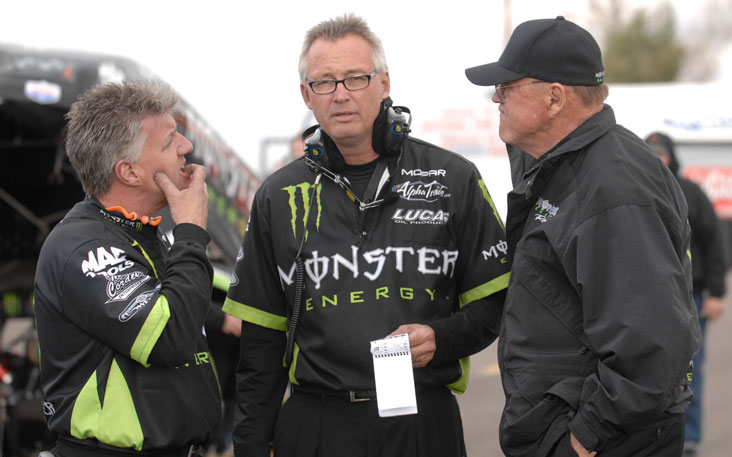 Alley stayed at that post until right around Indy 2007, when he rejoined Bernstein, who making a comeback in the Funny Car class with a new sponsorship from Monster Energy. Despite a talented tuning roster that included (at varying times) Jimmy Walsh, Johnny West, and Gary Kennedy (the latter two shown above, with Alley, right), the team struggled, and life was tough for both Bernstein and Alley. 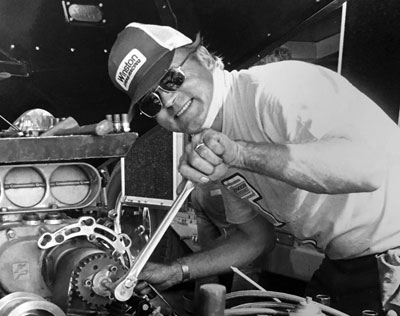 “I look back now and wish I'd never talking him into coming to that deal because I think he really enjoyed the NHRA side better,” Bernstein lamented. “Ray was really sweetheart of a guy, more often than not, but like all us he could get his nose out of joint. As talented as he was, he sometimes would get extremely forgetful, like working on the car and putting jets in. He could easily get distracted, so we had a rule that nobody talks to Ray while he’s working on the race car, Sheryl [Bernstein’s wife] came up with the name; we used to call him ‘Lemonhead,’ and he loved it. He thought it was funny as hell because he was just sometimes in a la- la world of his own. It was funny for a guy who was as smart and sweet and intelligent could just be in his own world sometimes.

“But he was a very, very close friend and even when we would get on the bad side of each other -- because that wouldn't happen -- we always ended up getting back and kissing and making up. He was a great friend through the years, even through the bad times. We always came back to each other and cared about each other no matter what. He helped me so much in the beginning of my career; it’s just amazing because he seemed to always have confidence in me to be the driver that I could be and have success at it. He just saw that.

“When I first came out to California and met Ray, I‘d only been out of high school a couple of three years, but it was just one of those friendships that developed quickly and deeply. I was just this young kid, but we clicked. He was a great person, a great friend, I can't tell you how much influence he had on me through the years. It was like, whenever I got in the worst shape I was in, he was there to help.”