Drag racing lost another of its nitro-racing veterans Sept. 25 with the passing of 1970s Funny Car star Bill Leavitt just about a week shy of his 81st birthday. Leavitt was the first Funny Car driver to record an elapsed time of less than 6.5 seconds.
17 Oct 2019
Phil Burgess, NHRA National Dragster Editor
DRAGSTER Insider

Drag racing lost another of its nitro O.G.s Sept. 25 with the passing of 1970s Funny Car star Bill Leavitt just about a week shy of his 81st birthday.

Leavitt was known to fans of the ‘70s floppers for his incredibly quick and steady Quickie Too Mustang, the first car to record an elapsed time of less than 6.5 seconds. Leavitt, who, like many Funny Car racers of the early 1970s, got his first nitro fix in Top Fuel, shocked the drag racing universe Dec. 4, 1971, when he posted a 6.48 pass on the cool and tacky track at Lions Dragstrip.

The national record at the time was 6.80, set by Leroy Goldstein at the ’71 World Finals in Amarillo, and Goldstein also held the unofficial quickest time, a 6.73 set but not backed up at the ’71 Gatornationals. Goldstein also had held the national record entering the season with the 6.83 he’d run at the 1970 Nationals -– just a few months after making the sport’s first six-second Funny Car pass –- but it had only dipped three-hundredths all year before Leavitt lowered the boom at Lions. 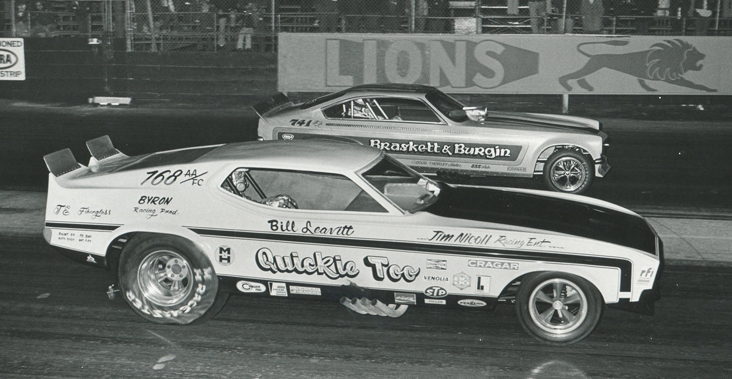 The urge here might be to suggest a timing malfunction, but the 6.48 was just the last of a great day in which he also recorded times of 6.53 and 6.51. The 6.48 was not recognized as an NHRA national record because the meet was not certified, which led track manager Steve Evans to seek status for the track to conduct national record runs from both the NHRA and ACCUS, America's representative to the Federation Internationale de L' Automobile, motorsports’ world governing body.

In a Jan. 14, 1972 story in the Long Beach (Calif.) Independent newspaper, Evans explained to staff writer Allen Wolfe, “These national records are incredibly important and I think we have the track that can produce those records. Through the years it’s been an accepted fact that Lions has the fastest asphalt in the United States. All you have to do is pick up a copy of Drag News or National Dragster and read, 'Bill Leavitt runs 6.48 at Lions. Quickest funny car in the nation.' But you could never find it in the record book ... it was never there officially."

It didn’t take long to get there. A month later at Lions’ Grand Premiere, Gary Burgin reset the national record to 6.72. Although it was the last NHRA national record set at Lions, which closed at the end of that year with the raucous Last Drag Race, those runs seemed to open the performance floodgates for the class.

By summer, Bobby Rowe, Larry Fullerton, and Ron O’Donnell all bettered Leavitt’s 6.48, and by year’s end, Pat Foster would scorch the Ontario Motor Speedway timers with a 6.29 in the Barry Setzer Vega. 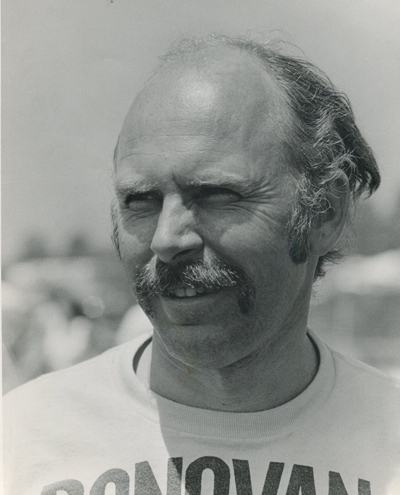 But back to Bill Leavitt.

One thing I find outrageously weird is that in many references I find of him he’s referred to the old man of the class. The June 1972 issue of Drag Racing USA referred to him as “one of the oldest active Funny Car pilots” and cited his balding head in the story’s headline. He was just 33, for Pete’s sake. Crazy, right? (Of course, Don Prudhomme was still a kid of 30 at the time.)

By way of contrast, our current Funny Car champ, J.R. Todd, is 37. So is Shawn Langdon. Ron Capps, Robert Hight, Jack Beckman, Tommy Johnson Jr., and Cruz Pedregon are all over 50 and still in the prime of their careers.

Leavitt had been around a long time. Originally born in Lowville, N.Y., he migrated first to Michigan, where he started from the ground up with a Cadillac-powered ’51 Ford B/Gasser and then a Chevy-powered Willys. According to drag racing historian Bill Pitts, which he was in Michigan Leavitt worked with Connie Kalitta to build Motor City Dragway in Baltimore, Mich., in 1957.

The following year, Leavitt continued his westward migration to Southern California, where he ran a five-window ’34 Ford, again in B/Gas, at Paradise Mesa before moving into the Top Gas ranks in 1959, where he wrenched on the car driven by partner Jerry Baltes on a car that reached the #5 spot on the Drag News Mr. Eliminator chart. Leavitt continued with Baltes as they moved into Top Fuel in 1963. 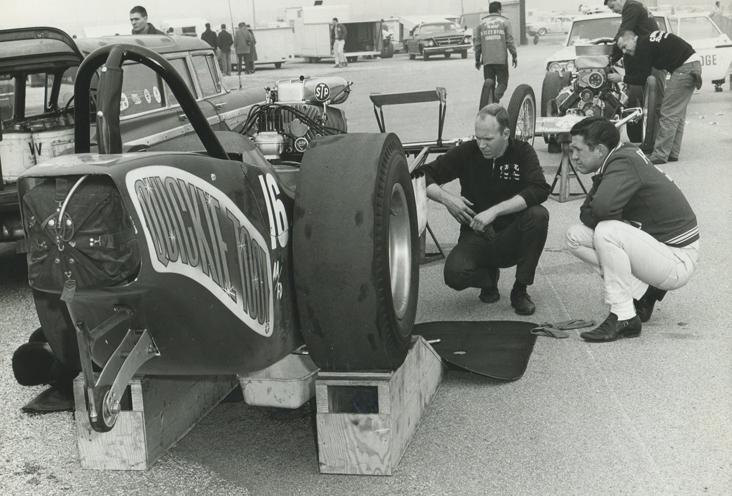 Leavitt finally got to drive his own fuel dragster starting in 1964, the first car called Quickie Too, that reached #3 on the Drag News list. He upgraded to a Woody Gilmore rail in 1966 and ran through 1967 before parking the car, and his career, until 1971, when he came out with his recognizable yellow Mustang and, within a year, made it the quickest Funny Car on the planet despite sticking to his tried-and-true early Chrysler powerplant. Leavitt also reportedly worked closely with Bruce Crower on the development of the Crowerglide clutch

Leavitt moved back east in 1972, settling in Virginia, where Quickie Too continued to beat the best of the East Coast, too. In 1975, he got a new Mustang II shell for the car but retained the old-faithful chassis for another year before getting a low-riding S&W-built Monza. With the new Mustang, he qualified the now-Donovan-powered machine No. 1 at the NHRA Winternationals with a 6.21 and reached the semifinals for his finest NHRA outing.

Although he never won an NHRA national event, he is credited by some sources with several AHRA and IHRA wins, the only ones I could confirm were the AHRA Green Valley Nationals in Texas in the summer of 1972 and the IHRA Springnationals in Bristol in 1973. He also had a hand in the final result of one of drag racing’s most notorious events, the rain-soaked and painfully disorganized mess that was the 1974 PRO National Challenge at New York National Speedway.

Just 21 cars showed for the 32-car field and, well, as third-grade math taught us, 21 doesn’t successfully divide in 2, so by semifinal time, there were three survivors: Leavitt, Don Prudhomme, and Tom McEwen. McEwen had beaten Pat Foster the round before but got no e.t. on the run. The same thing happened to “the Snake” in his conquest of Shirl Greer. Leavitt took a single after Gene Snow was unable to stage, and got a 6.44 time slip. So, who gets the bye, right?

As explained by Steve Alexander in the Dec. 1974 edition of Super Stock & Drag Illustrated, “An argument over who would get the single ensued, with Prudhomme and McEwen coming very close to blows several times. According to Don Schumacher, ‘McEwen wanted the bye run or he was gonna load his car on the trailer. I said, OK, if you wanna put my back up against the wall, load it in the trailer. If you want to talk about it sensibly, get Prudhomme and Leavitt together and let's work it out like men instead of kids,” which is what finally ended up happening."

They agreed to let Prudhomme -- who had been the low qualifier with a 6.19 and had already receive the first-round bye as a result -- another single in the semifinals on the strength of his 6.29 second-round pass, but also agreed to split the total purse due the three of them equally. But Leavitt and McEwen both broke in their semifinal pass, with Leavitt managing to coast through first, and neither could repair in time for the final.

“At that point Prudhomme decided he'd had enough,” continued Alexander, “saying he was ‘pissed off with three days of this,’ he went up to [track manager] Ed Eaton and explained that it was senseless for him to bother making a final run since there was no competition to run against. He demanded both his trophy and money at that point, outright refusing to single in the final.”

Leavitt leaves behind four children, six grandchildren, and three great-grandchildren and a ton of fans like me who remember his screaming yellow Mustang. RIP, Mr. Leavitt.