On a rare off weekend, KB racing’s Dave Connolly returns to his first love, sportsman racing 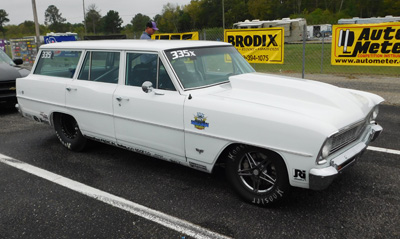 In his role as a valued crew member and part of the KB Racing Pro Stock team, Dave Connolly is currently battling for the NHRA Mello Yello Pro Stock championship with Summit-backed drivers Jason Line, Greg Anderson, and their KB stablemate, Bo Butner. A week after helping to tune Anderson and his Summit Camaro to a momentum-swinging win at last week’s AAA Texas NHRA Falls Nationals in Dallas, one might think that Connolly was ready for a relaxing weekend at home. That would be an incorrect assumption. For Connolly, that decision was easy; he headed from Dallas to Montgomery Motorsports Park where he joined more than 500 of the nation’s best E.T. bracket racers at the 24th annual Mickey Thompson Million Dollar Drag Race. These days, Connolly spends most of his time watching from the starting line, but this weekend, he is more than happy to don a helmet and fire jacket to compete for what could be a life-changing amount of money.

“The biggest thing, and maybe I’m biased because I grew up as a sportsman racer, and I bracket race a lot is that this is a very humbling sport,” said Connolly. “When you come to one of these big races from a driver’s standpoint it just doesn’t get any tougher. Everything you do is decided by thousandths of a second and it’s gotten tougher and tougher over the years mainly because of a lot of the younger kids coming up are so good. It’s funny I’m saying that now, but when you come to an event like this, the best of the best is going to be there. It’s huge money and yes, we don’t work on the cars as much [as Pro Stock] but mentally it’s just as tough. That’s a part I actually enjoy.”

During his career, Connolly has raced just about everything including a Pro Stock car and a 330-mph Top Fuel dragster. This week in Montgomery, his weapon of choice is a ’66 Chevy II station wagon that runs 5.7s in the eighth mile at over 125-mph. The car features a big block Chevy engine that was recently freshened by Jason Line. It’s not the quickest car he’s ever driven, but it is consistent and in bracket racing, where competitors have to predict their performance ahead of time, consistency means everything.

“I haven’t had this car too long, but it’s already been pretty good to me,” said Connolly. “The last time I made a pass in it before this weekend, I won a $20,000 race in Michigan. I probably shouldn’t let it sit as long as I have, but obviously I have a pretty busy schedule just with the Pro Stock stuff and everything else I have going on in my life. I wish I could drive it more often.”

Connolly is one of those rare individuals that seems to excel at both driving and tuning, and he maintains that each discipline has its own set of unique challenges. Connolly maintains that one of his strong points is the ability to collect and disseminate data and he applies the same logic to both Pro Stock and his bracket racing program. In both disciplines, he keeps detailed records on almost every adjustment or setting made to his cars and also tracks weather and track conditions. The online spreadsheet that Connolly uses features an overwhelming amount of data. Every time he makes an adjustment, no matter how minor, it’s logged and recorded for future reference. That’s critical in the world of high stakes bracket racing where a thousandth of a second might mean tens of thousandths of dollars in prize money.

“Some of the stuff I’m data logging is probably more than most and maybe that’s confusing on my end but you still learn something from every situation,” said Connolly. “That’s especially true when you’re dealing with the weather. For example, from yesterday to today, we had a big weather change and for my car, that was a difference of six-hundredths. You just never know what you’re going to get track and weather-wise. You learn something new every day.”

In Thursday’s Race Star Wheels warm-up race, that paid $60,000 to win, Connolly purchased two entries and made it to the third round with both of them. He also won a couple of rounds in Friday’s $30,000 event. On Sunday, he’ll have the opportunity to race in the Million Dollar Race signature event, where the winner is guaranteed to make at least $250,000. The entry fee for the Million is a $2,000, and racers who lose in the opening round can re-enter the race for an additional $500.

Connolly has won 30 NHRA national events in his career, including three at the Chevrolet Performance U.S. Nationals so it stands to reason that he’s well equipped to handle the pressure should he find himself in the late rounds of Sunday’s big race.

“Pressure? I think it’s the same,” he says. “Obviously, when you get yourself in situations like that, and get to a final you always want to turn on the win light. It doesn’t matter if it’s the U.S Nationals in Pro Stock or racing in a bracket race for a big check. I think its going keep you on your toes no matter what. I’d like to think I’m less nervous. Anytime you can prep yourself mentally for situations like that, it’ helps. The more you find yourself in pressure situations, the better off you’re going to be. In both types of racing, you get the same feeling whenever you light the stage bulb.