Quality not quantity has been the recipe for success for T.J. Zizzo so far in 2019

T.J. Zizzo and the Rust-oleum Top Fuel team don’t run a lot of races, preferring to spend their humble budget on quality outings instead of quantity, and they're looking to continue their impressive 2019 season this weekend at the Chevrolet Performance U.S. Nationals.
31 Aug 2019
Phil Burgess, NHRA National Dragster Editor
Feature

T.J. Zizzo and the Rust-oleum Top Fuel team don’t run a lot of races -– you’ll always see them at their hometown event in Joliet, Ill., and, of course, at Indy, and maybe one or two others –- preferring to spend their humble budget on quality outings instead of quantity.

“We have X amount of money and I asked the guys how many races they wanted to run. Six? Eight? Or three?” he said. “They all said they’d rather go to less races and give ourselves the best opportunity to win.”

The plan seems to be working out well.

After spending a small fortune over the winter to pare almost 100 pounds of weight off of the car, they were Friday’s low qualifier and went to the semifinals in their season debut at the Amalie Motor Oil NHRA Gatornationals and also defeated championship hopeful Leah Pritchett in round one in Joliet. 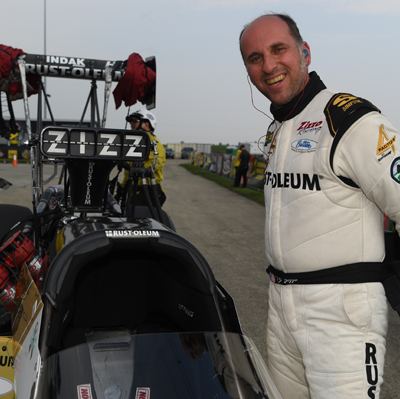 The first entry into their ledger at the Chevrolet Performance U.S. Nationals was a solid 3.83, but it came in a monster session under the lights at Lucas Oil Raceway at Indianapolis and left them in the No. 13 spot. Zizzo doesn’t think it will be good enough to stay in the field for the remaining four qualifying passes.

“We got Pat Dakin, Mike Salinas, Clay Millican, and Austin Prock all behind us, and we know they can all run better than that,” he explained. “We changed engines last night because we absolutely need to improve today. There’s no reason that we shouldn’t be able to run 3.79.”

He may need it, too, as a record-quick field could very well be established this year, breaking the record set two years ago at this event when eventual runner-up Kebin Kinsley sat in the No 16 spot with a 3.808. Kinsley’s surprising performance in 2017 and Terry McMillen’s unexpected win last year are certainly heartening to a guy like Zizzo who knows that by just qualifying you have a chance to win Indy.

“Look at McMillen last year; that was bad-ass,” he said, his eyes sparkling at the remembrance. “That was the highlight of my U.S. Nationals last year, and I competed in the race. That was super cool. It gives me hope that we could do the same thing.

“From a competition standpoint, NHRA has done an awesome job. It’s the best it’s ever been. You used to have four cars that could win a race now pretty much anyone who qualifies can win. It doesn’t matter where we qualify.”

The team also practices a simple game plan, instilled in them by Funny Car world champ tuner Rahn Tobler, who is a constant source of help and advice.

“We try not to make too many changes until we come up against a wall where we know can’t go any faster with what we’ve got, then we move onto the next thing,” he said. “Tobler took all of our blowers after the Joliet event and made them so that they’re all the same; he told us that we just need to have consistent parts so that if we have trouble with one, we just bolt another one on and we don’t have to worry about what it does to the tune-up. This sport is way too complicated and you don’t need more things to think about.”

Other than maybe winning Indy, of course.