Kebin Kinsley is back, and the Texas team is 'going for the jugular' for their fans

Kebin Kinsley returned to action Friday for his first runs in the Roger Hennen Motorsports Top Fueler since the Houston SpringNationals in April, but, as Kinsley says, "When Roger goes, he goes for the jugular.” They enter Saturday in the No. 15 spot looking to improve on their Friday 3.81 pass.
19 Oct 2019
Phil Burgess, NHRA National Dragster Editor
Race coverage

Kebin Kinsley returned to action Friday for his first runs in the Roger Hennen Motorsports Top Fueler since the Houston SpringNationals in April.

The team had planned to run more events this season but wounded some cylinder heads in Houston which, when combined with the busy businesses run by Hennen – who owns Diamond H Trench, which digs miles-long trenches for gas-well pipelines as well as road and pad construction for the wells -- and crew chief Robert Kirkland, curtailed the Texas team’s action to just their two homestate events, but they come into the AAA Texas FallNationals ready to rock.

“We don’t go as often as we’d like, but when Roger goes, he goes for the jugular,” said Kinsley, a former national-event-winning Top Alcohol Funny Car and drag-boat racer. “We may only go a couple of times a year, but when we go, we’re going to run it hard. That’s why I like racing for him. Five bullets and eight sets of heads, so we’re in good shape.

“I’m excited. It’s just such a privilege to do this; there are only a handful of people in the country that even get to sit in one of these things let alone get to go racing. It’s fun to hit the gas in anything, but I always can’t wait to hit the gas in this thing. It’s bad-ass.”

What’s also bad-ass is doing well, which the Hennen team has been able to do on occasion. Indy 2017 was a magical weekend that Kinsley and many fans won’t ever forget as they came one round –- and one broken blower drive against Steve Torrence –- from maybe winning the sport’s most prestigious event.

“I still have people come up to me, and tell me, ‘Man, my neighbors came running over to my house because I was in there jumping up and down hootin’ and hollerin’ for you watching TV.’ People want to see that.  It keeps the crowd mumping –- ‘Hey, the little guy still has a chance.’

“And it really makes you appreciate it when you go to the next few races and you suck. Everything lined up that one day and it was amazing and you want to get back to that spot, but it’s so hard. That’s why I praise the Torrences and the people who do this day in and day out and are good at it. I mean, he’s good at it, the team is good at it, all the way down to the person making the hamburgers. This is a real team game, which is why I dig it.

“This started out for me with just a bunch of my boat-racing buddies and we said, ‘Let’s go try that.’ I used to race boats against Roger back in the 1980s and Kirkland used to own the record-setting Spirit of Texas Top Fuel Hydro. The dynamics have changed some, but we’re still here for the passion of the sport.” 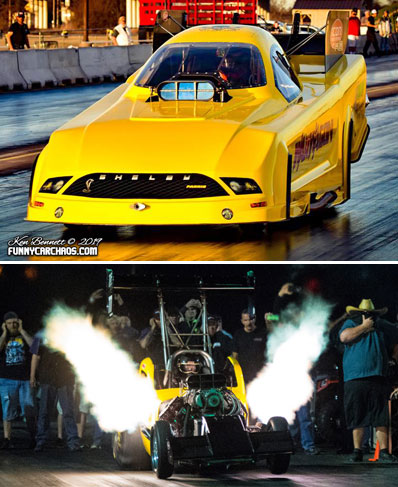 Although he hasn’t been racing in Top Fuel since April, Kinsley has kept himself busy, running a pair of nostalgia-type Funny Cars on the Funny Car Chaos match-race circuit and running his 5,500-square-foot Arlington-based shop, where he does engine work and fabrication for the asphalt and drag boat wars.

In addition to his own ’69 Mustang Funny Car –- called Wild Child, as his car and boat entries have been known for years -- he also wheels the War Wagon Mustang, an ex-Bob Tasca piece, for Howard & Shane Farri, who also crew of the Hennen dragster.

“It’s got a 60-gallon pump and two mags,” he said of the bright-yellow War Wagon. “It’s a lot of fun; we take the body off and put on a Top Fuel wing and run it as a Fuel Altered. They’ve got dragster headers on there and with the motor in front of me and seven-foot flames, it’ like driving through a tunnel of fire. It’s a blast.”