Jordan Vandergriff shares a link with Wild Horse Pass Motorsports Park, mostly through coincidence. He earned his Top Fuel license at the track outside of Phoenix, made his debut in the Professional class there, and began crewing for his uncle’s team in 2018 at the track with Blake Alexander behind the wheel.

That was not the first time Vandergriff worked with his uncle, but it started the journey that led him to the 3.738-second pass he ran during preseason testing.

“Did you see that run,” he asked, pointing to a timeslip practically still wet from the starting-line printer.

Vandergriff is proud of everything he does on the car. He does a lot, too. His hands are dirty, and it’s not from tightly gripping the steering wheel when he launches more than 300 mph down the 1,000-foot causeway. When he isn’t cracking jokes with crew chiefs Joe Barlam and (sometimes) Ron Douglas, he’s going over welds on the dragster and otherwise servicing the machine he pilots. 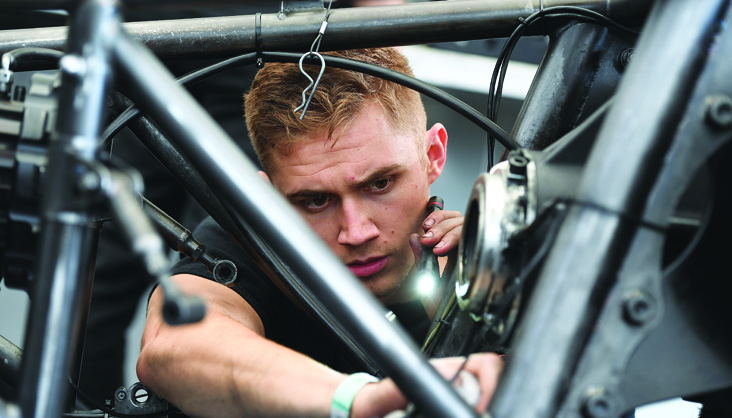 The kid doesn’t just mix nitro and sign autographs — not that there’s anything wrong with that. It’s just … different. Maybe that will change, but this is who Vandergriff is right now: A young person coming into a not-so-young category where he both works on the car and drives it while appreciating the privileged position he’s in.

“I understood the opportunity I had with my uncle and my family being involved in the racing business,” Vandergriff said. “I didn’t want to miss out on that. I want to be like my uncle and try to be better than him. I just want to be the best at this. Not a lot of people know about what we’re doing out here, so I’m trying to broaden our reach and be the best while doing it.”

Being the best means a couple of different things to Jordan. He wants to be the next Tony Schumacher, noticeable by his absence at the Lucas Oil NHRA Winternationals presented by ProtectTheHarvest.com. That means he wants to win a lot. He knows that’s difficult on a part-time schedule, so the first goal is to go racing more. That’s where marketing, self-promotion, and being the best version of himself comes in. Doing all that while remaining, well, real, is difficult in 2019.

“He makes really good playlists,” said Blake Alexander. “He’s probably one of the only guys in NHRA that listens to rap. Him and Leah Pritchett.”

Alexander picked up Vandergriff from the Phoenix Sky Harbor Airport during preseason testing in 2018, and the two became friends. They still text now that Alexander left Bob Vandergriff Racing to purchase a Funny Car team, and the former Top Fuel pilot is optimistic about the rookie’s chances in 2019.

“I think he’s going to win a lot, and honestly, has a great shot at winning rookie of the year,” said Alexander. “He was a sponge when I was driving there. He would ask me all kinds of questions after every run, and I’d just try to tell him everything I did in the car. When I’d shut it off, and how I’d react to certain things. Honestly, I think they have an opportunity to do better than I did last year.” 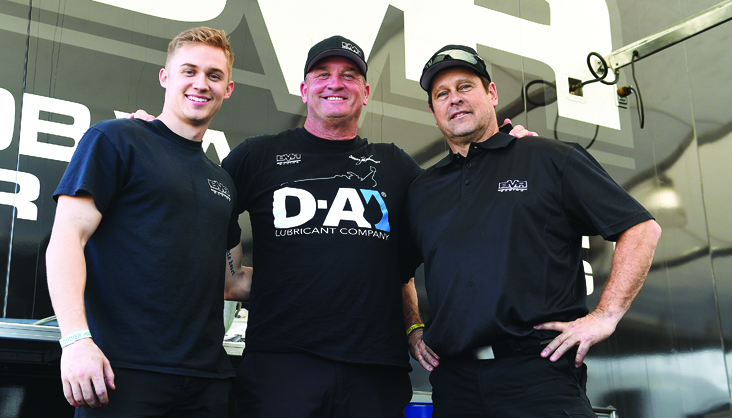 A reminder: Alexander went out on a part-time schedule and won twice while reaching three final rounds. That sets the bar high for Vandergriff, who does not have any Professional experience. At the same time, it doesn’t seem far-fetched. The team added Barlam to the squad and, after Alexander left, drivers Shawn Reed and Josh Hart.
His first official laps didn’t disappoint.

He made five passes at the Magic Dry Organic Absorbent NHRA Arizona Nationals, got down the track three times and averaged a 3.717 elapsed time. That made him the quickest driver in Top Fuel – and his .06 reaction time average helped him to the semifinals in his first drag race. Tire smoke cost him a shot at his first final, but few have made better debuts.

“Quite honestly, no,” said Vandergriff when asked if he expected to reach the semi’s in his debut. “I just wanted to come out here and make runs. I know I’ve got a very good car and the only way to approach (race day) is to treat every run like a qualifying run.”

His second event comes with the added pressure of prestige: The 50th annual Amalie Motor Oil NHRA Gatornationals. It’s the longest running event in NHRA history and will almost certainly come with a bump spot – something Vandergriff didn’t face at his first event. He qualified No. 4 in Phoenix, but without the same pressure he’ll face in Gainesville.

That’s not until March 14. For now, the part-time racer can point to two round wins, 77 points and a ninth-place position in the standings. That’s better than four full-time racers. Not too shabby, kid. 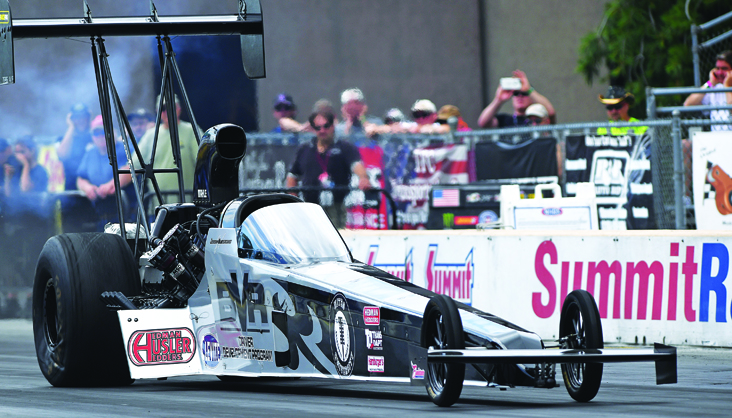 “It’s funny, you mention I didn’t run too much in the alcohol car, and I didn’t — I only ran I think 48 times in that car,” said Vandergriff, giving away the game in the process.

He’s the kind of person that might pretend he doesn’t know exactly how many times he ran in a Top Alcohol Dragster, or might pretend he doesn’t know his career bests in every category he’s competed in. His best acting job is as a totally regular guy who is also very good at a bunch of stuff. It’s likability in some sense, but in some ways, he’s just trying to fit in.

Making those runs in the Top Alcohol Dragster prepared him for the next step. While nothing fully prepares you for the gut-punching speed of a Top Fuel Dragster, you can get accustomed to the mind-numbing routine that comes before it.

“You have to strap into the car, do the burnout, and back it up, all of these things that are the same,” Vandergriff said. “If anything, it just calms you down for the next step. All the procedures are the same between the two, so I just feel really comfortable because I’ve turned all the switches off, I’ve pulled the parachutes at 275 mph, I’ve done all these things before, and that make me feel very ready.” 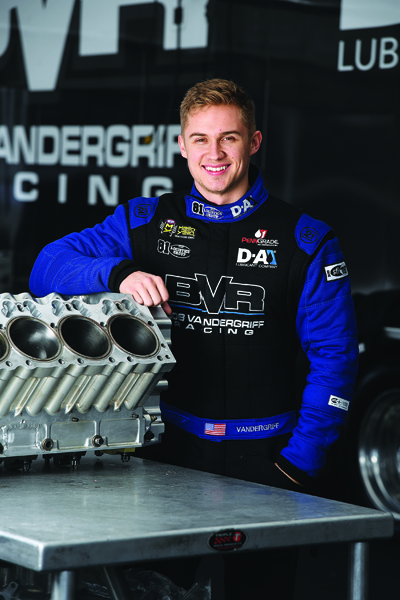 Jordan was as surprised as anyone when Bob Vandergriff Racing shut down in 2016. He hadn’t outright said he wanted to get in a Top Fueler but had indicated interest. So, when it looked like that opportunity was fading, there were some sleepless nights.

“There were talks about me going on the road and working with the team,” he said. “So, I went to the Vegas race, and they shut down after that, so I saw the news and was like ‘wow, OK.’ I just knew in the back of my head this was still something I wanted to have happen.”

So, he and Bob made it happen. The two had a conversation and brought the team back out. Jordan drove in the Top Alcohol category for a season while Bob made sure the team was healthy, and here we are. If there’s one thing to say about BVR, it’s that it all looks easy when it most certainly is not. The evidence of its difficulty can be found anywhere else in the midway.

Vandergriff, for his part, feels his biggest challenge comes with establishing his own identity and then making sure people buy into the truth he feels he’s telling.

“People have their preconceived notions on my uncle and my family, so I really think the hardest thing is trying to break down those opinions,” he said. “People on the inside know it’s really not like that. My uncle isn’t really like what people say, and the team didn’t shut down just because. The hardest thing isn’t convincing people, but just telling people that we’re back, and we plan on doing this for a long time.” 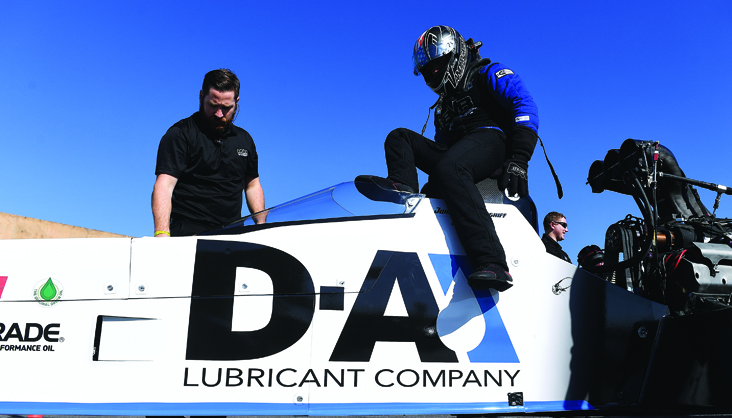 So does Vandergriff’s buddy Austin Prock, who made his debut at the Lucas Oil NHRA Winternationals. He figures to be one of Vandergriff’s biggest competitors for the Auto Club of Southern California Road to the Future Award (also known as the rookie of the year award). That suits Vandergriff. They race in the same class, putting destiny in his hands.

“I’m really excited about the new talent coming into this sport,” he said. “People like myself and Austin getting out here really excites me. This just makes it a lot more fun”

They will be the youngest drivers in the class by at least four years. Other than being two of the only racers born in the 1990s (shout out to Audrey Worm and Ashley Sanford), Prock and Vandergriff share some commonalities: Their families are deeply tied to NHRA, they can be found wrenching on nitro cars between rounds, and neither one of them will give up an inch to the other on the starting line in 2019.

Vandergriff knows the opportunity laid in front of him. Now, it’s time to seize it.