It's the last ride for Cory MClenathan, and he's hoping that better times are ahead

Twenty-eight years of Top Fuel competition will come to an end this weekend for Cory McClenathan, who earlier this year announced that the final three events of the 2019 season would be his last. The first two have been rough, and he'd like a storybook finish at his home track in Pomona.
15 Nov 2019
Phil Burgess, NHRA National Dragster Editor
Feature

Twenty-eight years of Top Fuel competition will come to an end this weekend for Cory McClenathan, who earlier this year announced that the final three events of the 2019 season would be his last.

McClenathan, who made his Top Fuel debut at Auto Club Raceway at Pomona in 1991 and then went on to win 34 event titles including two at the fabled U.S. Nationals, is hoping that this final weekend turns out better than the previous two, in Dallas and Las Vegas, where the Dexter Tuttle-owned and -tuned dragster was not able to qualify.

“When I first talked about this plan months ago I figured we’d come out run well, qualify, and maybe break some hearts, but it hasn’t turned out that way yet,” he said. “We’ve hurt a lot of parts. 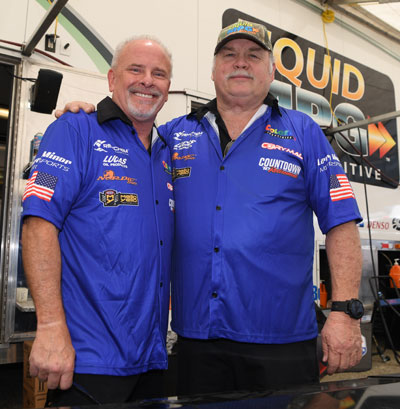 “We’ve just been behind the 8-ball trying to catch up. I’m frustrated, Dexter is frustrated, the guys have been doing the best they can, but we’re just behind."

Part of the problem lies in the match-race tune-up they had developed when they weren’t running national events, which was based around an 80% cut, well short of the 90% maximum allowed by the rules.

“If we put 80% [nitro] back into I, we know it would run 3.90s all day long, but that’s not going to be good enough,” he said. “We went to 88% right away like everyone else is running in Dallas. We’ve gotten a lot of help along the way. Right now, Doug Kuch is helping us, and he’s familiar with the Alan Johnson way of doing things, so we’ve been implementing that along the way

“We hurt so many parts we’ve had to back up a little bit. We’ll probably only go 400-500 feet on the first run just to make sure everything is OK.”

“Dexter has spent a lot of money getting some of the latest parts to make this happen,” he said. “He’s got some of the newest Alan Johnson cylinder heads and an all-valve [which controls multiple engine- and clutch-function systems]. We’re trying to do it the right way. I’d love to qualify and go a few rounds.

No matter how it goes down, he’s got a lot of memories to look back on and appreciates  every sponsor, incouding backing from several of his longtime sponsors including Nordic Boats, RevChem Composites, ColorFast, motorsports hall of famer Larry Minor, and Lucas Oil who are supportign these final three events -- every fan he’s ever had and those who continue to urge him on.

READ MORE: Cory Mac: He always played to win, and he did a lot of that

“I just want to take care of all of the fans who have supported me and cheered for me over all the years,” he said. “Of course, I wish we’d have done better, but I doesn’t matter to the fans how we’ve done, they’ve all been awesome, I haven’t heard or read one negative word, and that’s the guiding light that keeps seeing me through this. 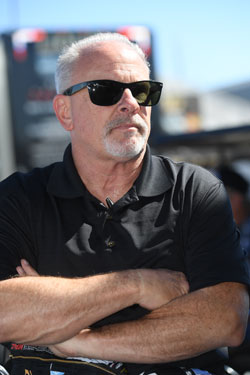 “Back in the day when I didn’t qualify, I wasn’t a happy guy. In Vegas, when we didn’t qualify, I took off all my gear and I see all of the cameras pointing at me waiting to see me throw a fit like I used to, but I stayed clam. ‘You guys aren’t going to get it.’ “

Although it’s been a disappointing final two of three chapters in his book, and several people have suggested that he make his final race in another car, even if he had to rent one.

“I wouldn’t do that to Dexter,” he insisted. “He’s meant so much and done so much for me these last few years. Plus I know when he gets it right he’s like a brick. It will be there every single time.

“But no matter what happens this weekend, it’s time for me to back up, take care of Mom, and do my own thing for a while. I’ve got plenty of things to do at home – projects I’ve started over the years and not been able to finish. It’s probably the last ride for me … in a Top Fuel car, at least.”