Photos by the author and courtesy of Hot Rod magazine

Some of the best street-legal racers from Hot Rod Magazine’s Drag Week will be featured at the 12th annual NTK NHRA Carolina Nationals in a special exhibition. Eight of the top performers from Hot Rod Drag Week’s Street Race Small Block Power Adder category will be on hand at the event. Randall Reed, Rick Steinke, Jason Bergeson, Scott Brown, Joe Jennings, Lisa Fischer, Steve Haefner and Jeff Oppenheim will make two runs on Friday, Oct. 11 and two runs on Saturday, Oct. 12. The average elapsed time closest to 8.50 will be the winner and will earn a special acrylic NHRA “Wally” trophy, to be presented during pre-race ceremonies on Sunday Oct. 13.

Hot Rod’s Drag Week presented by Gear Vendors Overdrive is an annual event that showcases the world’s quickest and fastest street-legal drag race cars. Drag Week features a unique and challenging format where competitors must drive nearly 1,000 highway miles and also make runs at four different dragstrips during a five day period. All vehicles must be driven from track to track with checkpoints along the way and Drag Week rules severely limit the use of support equipment and personnel. Drag Week 2019 kicked off last month at Virginia Motorsports Park and also included stops in Cecil County, Md., Atco, N.J. and Budds Creek, Md. 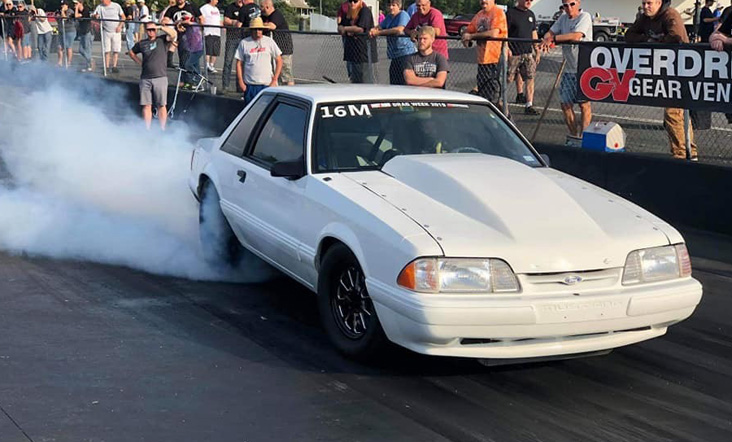 The Street Race Small Block Power Adder class is historically one of the most competitive classes at Drag Week and this year’s event was no exception with 40 entries in the field. Randall Reed will be racing the same ’93 Mustang that he recently drove to the overall class title in SRSBPA with an 8.520-second average. Reed’s Texas-based Mustang features a 427-cid Chevy LS engine with a single 88mm turbocharger and a Powerglide Transmission. Reed used a nearly-perfect 8.505 run on the final day of the event to officially wrap up the title and he also managed to run in excess of 163-mph on all five days.

If Reed wants to win the Charlotte exhibition, he’ll once again have to hold off Steinke, who finished in the No. 2 spot at Drag Week with an 8.539-second average. Steinke’s unique four door ’67 Chevelle is a staple of Drag Week events. It is his first car, and he’s owned it since 1993. Affectionately known as “Honk if Parts Fall off”, Steinke, from Holland, Pa., admits that his car is deceptively quick and looks nothing like an 8-second street car at first glance. Power comes from a small-block Chevy fitted with a single 88mm turbocharger. 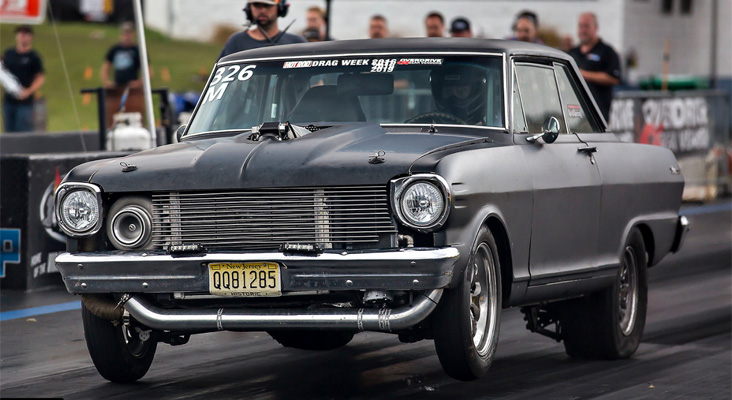 The small block Chevy, turbocharger and Powerglide transmission combo also suits Jennings for use in his New Jersey-based ’63 Chevy Nova. Jennings, of finished fourth at Drag Week with an 8.731-second average with a best of 8.562 on the opening day in Richmond. 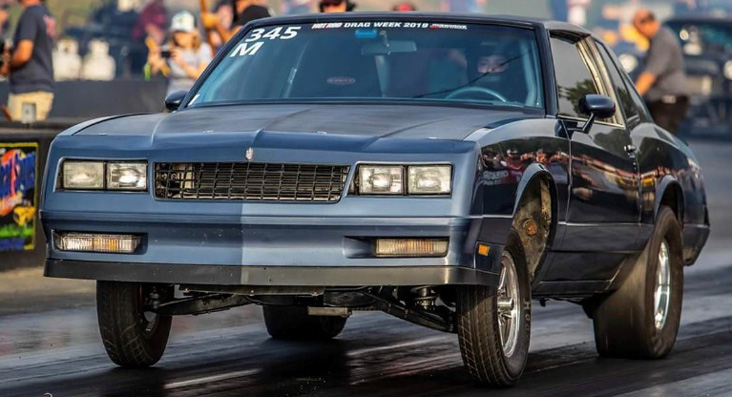 Bergeson, of Minnesota, built the chassis and roll cage on his ’84 Chevy Monte Carlo SS, and also assembled the 365-cid Chevy LS engine that powers the car to consistent eight-second elapsed times. Bergeson uses a billet 80mm turbocharger from Work Turbochargers and he tunes the car with the help of Rob Senkyr. Bergeson ran in the eights on all five days of Drag Week and finished with an 8.900-second average. 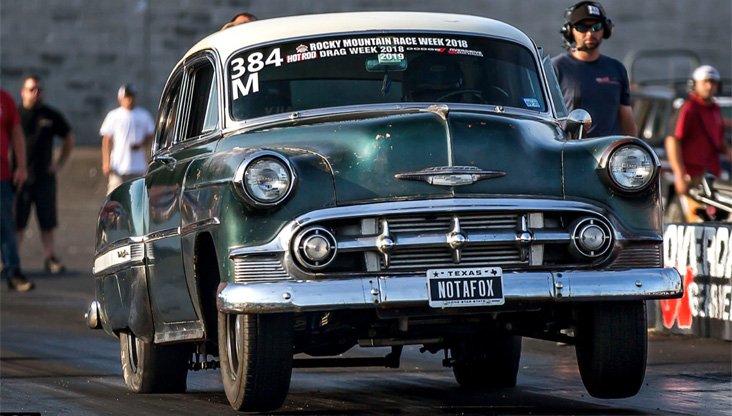 The field of Drag Week entries is diverse and nowhere is that more evident than Brown’s Texas-based ’53 Chevy Bel Air. Brown found the car eight years ago in pieces in a storage facility in Austin, Texas and has built it into an eight-second street machine with the addition of a six-liter Chevy LS engine and a single Borg Warner 76mm turbocharger. Brown has competed in the five drag week events and has been among the top eight finishers in 2018-19. His best performance is an 8.65 at over 157-mph. 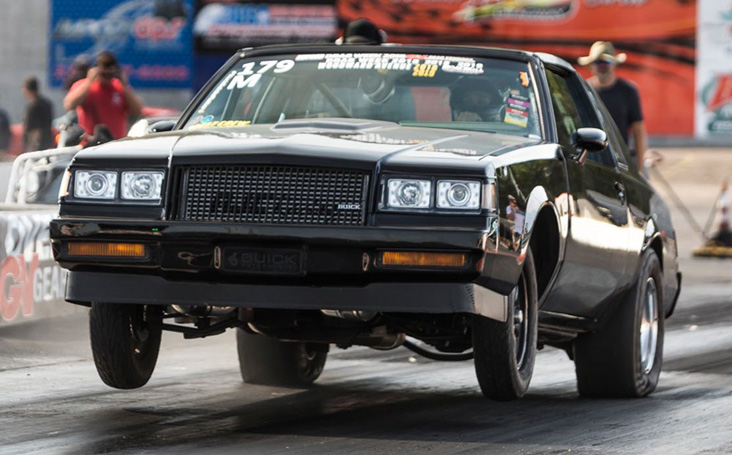 With a full interior and full exhaust, Fischer’s ’87 Buick Grand National is perhaps the most stock appearing off all the Drag Week entries and with just 260-cid of turbocharged V-6 under the hood, it’s also got the smallest engine by far. Regardless, the Pennsylvania-based Fischer is hardly an underdog against the rest of the field. Her Buick has run deep into the eight-second zone and was the quickest Buick in Drag Week this year.

Corvette fans are sure to love Haefner’s ’10 Grand Sport model which is equipped with a 427-cid Chevy LS and a ProCharger FX-1 centrifugal supercharger and a Powerglide transmission. With the help of James and Angel Short of ShorTuning, Haefner, from Missouri, also ran in the eights during Drag Week and completed the long daily drive from track to track.

Oppenheim, who also hails from Pennsylvania, will be running his ’86 El Camino, that is fitted with a 370-cid engine and a Borg Worner 76mm turbocharger and a Turbo 400 transmission. Oppenheim has owned the car for 20 years and is a veteran of seven Drag Week events. In 2016, Oppenheim displayed the sort of dedication and never-say-die attitude that defines Drag Week racers when his car caught fire at one of the daily checkpoints. Fellow racers rushed to put the fire out, but not before a significant amount of damage had been done including all of the underhood wiring. Undeterred, Oppenheim found the parts he needed to repair the car and was awarded the Spirit of Drag Week trophy.

To purchase general-admission or reserved seats, call 800-455-FANS (3267). Tickets also are available online at www.zmaxdragway.com. Kids 13 and under are free with a paid adult. To honor the Salute to First Responders, military and first responders can save 20 percent on tickets at the gate.