"It's ladies' night and I'm about to do this" -Angelle Sampey
14 Sep 2019
Jacob Sundstrom, NHRA National Dragster Associate Editor
Feature

Track records were broken after a pair of weather delays in Reading, Pennsylvania. Hear what the teams had to say about the first day of qualifying at the Mopar Express Lane NHRA Nationals presented by Pennzoil.

“We have our new Dodge Hellcat body really trimmed out and Tobler went outside of his comfort zone since we had such a good first run. He really wanted to see what he could do if we get these conditions at another Countdown race. I knew it was going to be a handful. I knew we were on a good run and was hoping we could repeat our first session run. When they told me after the run we went 339, that was pretty neat. Any record you set now in this new track prep era is special. It means more now to run a 3.83 and to go 339 because we just don’t have the track prep and grip we used to have.” 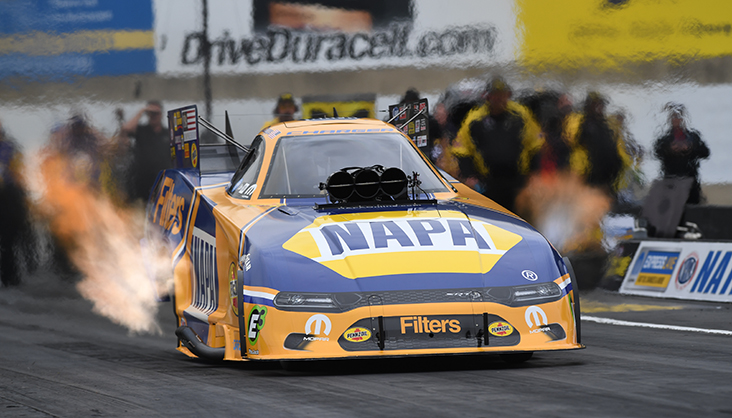 “That 3.651 run felt awesome. I’m excited to be here at Maple Grove. This is the first race of the Countdown and we’ve been breaking records recently, last weekend and this weekend, so it feels good that we’re starting to turn a corner and really figure things out right when it matters, going into the Countdown. We’re No. 1 right now and we’re hoping to pick up more points tomorrow and go out and win this thing.”

“We ran a career best here this afternoon, a 3.697, two thousandths quicker than I went in Pomona. Good start going into the Countdown. I got one bonus point and every point is going to count in this six-race shootout, so I’m pretty proud of that." “We went up there trying to improve and run a .67 tonight and it just didn’t hold. I thought it was going to go and it shook past the 60-foot mark, which is odd. So, I felt something new, we learned something new. Going to get them tomorrow, it’s going to be a gorilla.”

“We’ve been doing a lot of work on this Auto Club Chevy. We took a day to test and we’ve been working on some things. Jimmy Prock, Chris Cunningham, this whole team, they know how to make this car go when it counts,” Hight said. “Today wasn’t the day we wanted but we’ll get back to it tomorrow and make some moves. We’ll be ready come Sunday.”

“We’re lucky to be in. I got it over on the centerline in that second run and it was just driver error, the driver has to control it. It just happened so quick but I’ll fix it tomorrow. Brian Corradi and Danny Hood, all the guys on my PEAK team, they’ve given me a good race car so tomorrow we’ll do better. Brittany is No. 1 right now with Advance, set the track record with her ET. The Prock kid and Robert did good today too. We’re in the Countdown and we’re all working hard.” 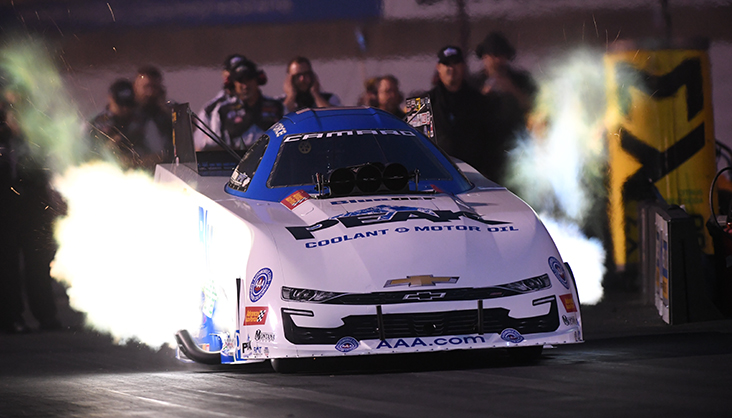 "Man, it was awesome. I left the clutch out and I knew it was going to be great. My crew chiefs are just beaming with confidence and that makes me really happy because I got my guys back. I was able to drive the car successfully that run -- I didn't do that bang up of a job the first run, but we came in on the last run pretty strong.

"They told me before I went up there, we should be able to go 48 right then. And if we were bracket racing, we went dead on zero. So, I'd say they called it well. And I'm just really proud to have such a great car underneath me. The whole Melling Performance crew has worked really hard on it." 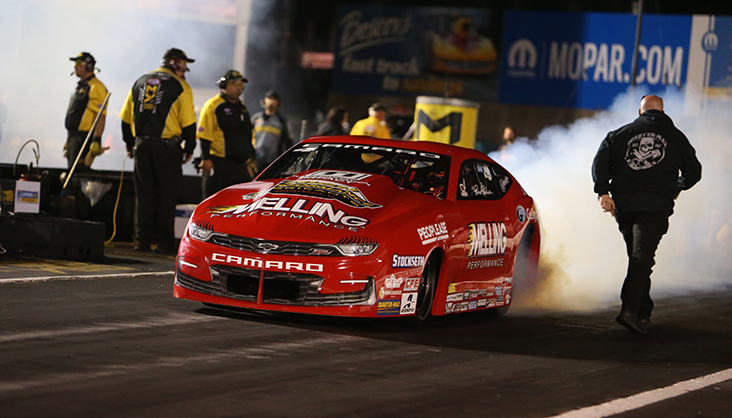 "I was nervous going into the second round, because I didn't know what I was going to do. And then I heard Alan Reinhart talking about the two girls. It's Erica [Enders] and Brittany [Force] have number one. And I was like, You know what? He kept saying it was Ladies Night. And I was like, That's right. It's ladies night and I'm about to do this. And I mean, it was perfect. I was so glad he said that. I'm so glad they did that.

"You know, I've always been one of the girls that just feels like I just want to be a racer. But as I've gotten older and I have a daughter who looks up to me, I really understand the importance of female power and supporting each other, so good job Erica and Brittany!"