North Carolina fans have learned to love their nitro like they love their NASCAR, and this weekend they have a homestate favorite to cheer for in veteran Bob Gilbertson.
27 Apr 2019
Phil Burgess, NHRA National Dragster Editor
Race coverage

North Carolina fans have learned to love their nitro like they love their NASCAR, and this weekend they have a homestate favorite to cheer for in veteran Bob Gilbertson.

For the last seven years, the Gastonia, N.C., racer, once a tour regular, has only run the fall Charlotte event on the schedule but this year is committed to making a few more events with his Trick Tank Monte Carlo, starting with this weekend’s Four-Wide Nationals, an event at which he last competed in 2010.

While North Carolina claims him now, Gilbertson was actually born in Vancouver, Wash., where he launched his career in 1976, as a 21-year-old rookie racing in Alcohol Funny Car and finished second in the Division 6 standings. Gilbertson had saved his pennies and he’d saved his dimes working at an air tank manufacturing plant in Portland, Ore., just across the Columbia River.

With the skills he learned there, he started his own portable air-tank business, Trick Tank, and relocated to North Carolina. Once the business was firmly established – and grew to also include Carolina Tank, which produces steel and aluminum air tank reservoirs for the trucking industry, the military and other commercial vehicles – he went back to racing in 1986 in a nitro Funny Car, competing part-time, mostly on the IHRA circuit, where he scored his first career win, in Canada, in 1992. 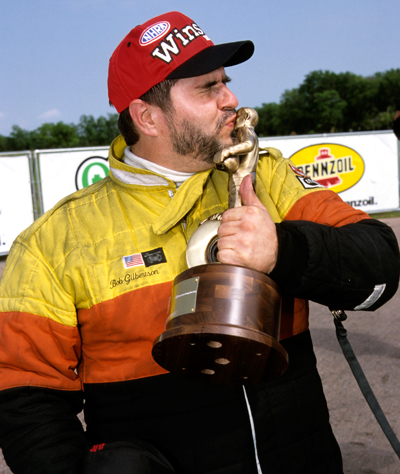 By 1997, he’d founded Terminator Motorsports and made his fulltime push into NHRA and, with tuners Tommy DeLago and Nicky Boninfante, won his first (and, to date, only NHRA title) at the Houston event in 2000, coming from the No. 16 qualifying spot and upsetting John Force, Jim Epler, Ron Capps, and Jerry Toliver to win. He added four more runner-ups in NHRA competition (in Denver and Las Vegas in 2001, in Gainesville in 2005, and in Houston in 2006).

Having experienced those kinds of successes, Gilbertson has been reluctant to even bring out a car that he didn’t think could win.

“My business has been up and down so I haven’t been able to give the racecar the kind of attention it deserves, and I won’t come to a race I don’t think I can win,” he said. “I’m not here to make one run, get the money, and go home. We’re finally in a place where I can run some more, so I’m looking at also running Atlanta and Bristol, and then back here again in the fall, and next year should be even better.”

Veteran nitro hand John “Bode” Smith has come up from South Carolina to help Gilbertson this weekend, bringing with him a wealth of experience and knowledge. His crew consists of some friends whose 9-to-5 is repairing buses for the city of Charlotte.

“I still have passion to do this,” he said. “Once you have it, you never lose it, but you have to do it right. It’s like a poker game; you can’t be afraid to go all-in. It’s hard to come out here and do it right if you don’t have the parts and you’re running over to borrow stuff from people. It’s not 1970 anymore."

Gilbertson's first run Friday, a 5.16, was disallowed after he nicked the timing blocks in the traps. He'll have two more runs today.