The Gatornationals: A family tradition that led to a career in drag racing

Simply put, the NHRA national event known as the Gatornationals is the reason that I’m involved with this sport now. For five decades, drag racing fans on the East Coast have seen many milestones, fantastic performances, and epic thrills, but what keeps people coming back is the atmosphere at this crown-jewel event. I can’t help but feel nostalgic as we get ready for the 50th edition.

For me, it started 10 years after the inaugural event, at the 1980 Gatornationals. My diehard drag racing fan father had the idea that our family would drive the five hours north to see an NHRA national event. I was seven years old, and our family car was a 1978 Pontiac Trans Am that ultimately became my Super Pro track championship car. (Gotta mention that!) We drove from my hometown of Hollywood, Fla., to Gainesville, and I remember it taking forever. I had been to Miami-Hollywood Speedway, and I knew the names; Don Garlits, Shirley Muldowney, Don “the Snake” Prudhomme, Tom “the Mongoose” McEwen, and many others. This was going to be different, but I didn’t really understand how. 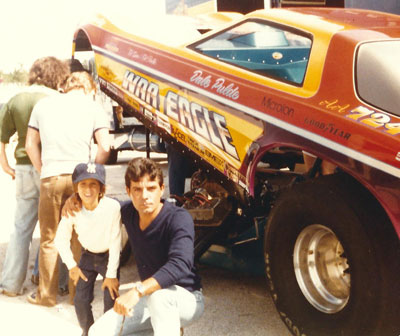 Looking back, I was just a baby, and at seven, I was simply happy to be going somewhere cool with my parents. We started out going only Saturday and Sunday. My mother came with us, and we spent time in the pits and watching racing, but also chilling under the trees at the top end, enjoying the experience. As the years went by, we started going three days, and it became a “father and son” trip. Fortunately, my mother made it all possible by holding down the fort at home.

It is impossible to state the impact that this yearly trip has had on me. My personal racing, my profession, and my understanding of life have all been impacted. There have been times that it has been challenging, but we have always made it to Gainesville. And this year, while NHRA celebrates 50 years, my family celebrates the milestone of 40 straight Gatornationals. Here are some personal highlights.

Our first Gatornationals was memorable, but honestly, I don’t remember a whole lot beyond just being there and walking across the staging lanes seeing “Dyno” Don’s and “Grumpy” Jenkins’ cars. Gary Beck won Top Fuel, Snake won in the Army car, and Lee Shepherd won Pro Stock, but that got our streak going.

Raymond Beadle’s roll-over is still one of drag racing’s greatest moments, and I was there to see it. I can remember peering through a forest of adults as Al Segrini ran to victory and Beadle emerged with his arms in the air. We went back into the pits afterward to see the car. Dad and I were both rooting for Al, but on that day, Beadle became immortal.

After seeing Lee Shepherd win three of my first four Gatornationals, I had come to understand how great he was. But at the 1985 Gators, Lee was no longer with us. I remember having a difficult time making sense of it all, and the missing man formation of Pro Stockers helped me realize that I wasn’t alone in my sadness. For the first time, I understood that NHRA was a community. 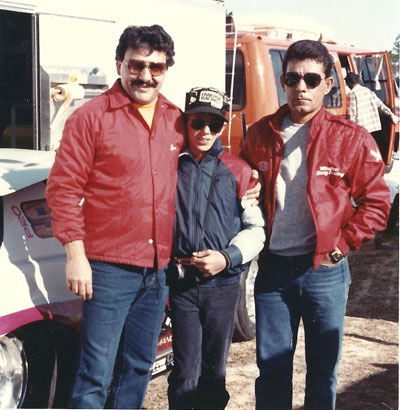 Watching Don Garlits take SRXXX from “life support” to more than 270 mph, in the same year that Don Campanello decided that my dad and I were his lucky charms, was amazing. Campanello invited us to be in his winner’s circle picture. How cool is that?

Darrell Gwynn’s back-to-back victories in 1989 and ’90 were especially powerful because DG, our hometown hero, won his home race. It is still the largest winner’s circle that I have ever seen, and it is fitting that Darrell is the official starter for NHRA’s Unfinished Business legends race at the 50th event.

I’m limited in the moments I can revisit here, so it’s fortunate I have my WFO podcast to recap the rest. Here are some quick hits: Muldowney over Garlits in the final. Maybe they’ll settle some Unfinished Business this year?; Blaine Johnson wins as Scott Kalitta blows over backwards!; WJ and John Force, 17 wins! I need not say more.

Our personal streak nearly ended twice. The first time was early on. Our T/A sat on Centerline Auto Drags and needed air shocks to make the trip. I remember calling my mother from the tire shop to tell her we weren’t going because a fire raged from the backseat courtesy of the torch-wielding installer, who was possibly drunk on the job. A little fire extinguisher and some blankets and we made the trip.

The second was in 1987. My father had a major surgery just weeks before the race. Frankly, we should have not gone, but my dad used the race as motivation, and his recovery went faster than expected. I was his crutch as we walked the pits, and we were rewarded with seeing Snake win in his return.

Whether things have been going well or not so well, for our family, there has always been the Gatornationals. I hope to see you there, and we can make some Gainesville history together.

National Dragster columnist Joe Castello is an NHRA staff announcer, host of the “WFO Radio NHRA Nitro” podcast, and co-host of Performance TV on the Velocity Network. He is a track championship-winning bracket racer who started his racing and announcing career at Miami-Hollywood Speedway Park in Miami. Castello and his father own a ’78 Pontiac Trans Am with NHRA Super Street aspirations. Readers can listen to the “WFO Radio” podcast on anything with an internet connection and contact Castello on Twitter @WFOJoe or via email at [email protected].