A final farewell to 'the Dones'

An all-star cast of racers and longtime acquaintances of “the Dones” gathered at the Wally Parks NHRA Museum to remember legendary promoter Bill Doner and tell old stories and celebrate one of the most unique members of the drag racing family.
21 Nov 2019
Phil Burgess, NHRA National Dragster Editor
DRAGSTER Insider

You know when you hear a really funny joke with a punchline so bawdy that you can’t tell it in mixed company and it’s going to burn a hole right through your very being to not be able to?

Yeah, that’s me after the Bill Doner “celebration of life” last Saturday at the Wally Parks NHRA Motorsports Museum. An all-star cast of racers and longtime acquaintances of “the Dones” gathered to remember him and tell old stories and celebrate one of the most unique members of the drag racing family. Set up on behalf of the Doner family by our two dynamic Lynns –- Lynn Rose, who worked with Doner at his Southern California tracks, and Lynn Prudhomme, wife of “the Snake” -- and hosted by Jack Beckman and Ron Capps, two Funny Car drivers who would have been right at home racing in the Doner era, it had no choice but to be epic. 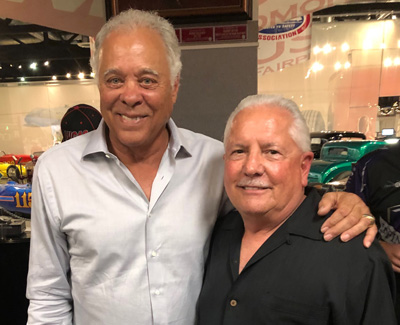 The turnout was a Who’s Who of those who orbited Doner’s universe. Don Prudhomme, Ed McCulloch, Jerry Ruth, John Force, Donnie Couch, Pat Galvin, and Kenny Achs were the scheduled speakers, but everywhere to looked there were faces you’d recognize. Longtime Prudhomme tuner Bob Brandt (pictured at right with “the Snake”; I couldn't resist getting them together for a photo of the two guys who conspired to fuel my Funny Car summers), Billy “Bones” Miller, Tom Prock, wheelstanding legend “Wild Bill” Shrewsberry, and so many others. I'd interviewed almost all of the speakers in my original tribute to Doner -- Farewell to 'the Dones' that ran the week after he passed away in August -- so I expected to (and did) hear a lot of the same sentiments, but it got way better than that, 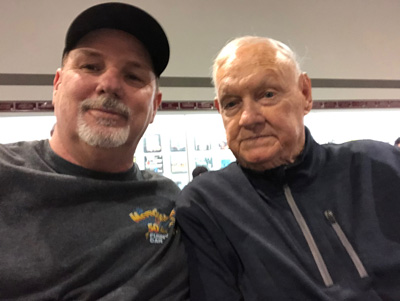 (I sat next to Shrewsberry (photo evidence at right; all other photos below taken by my ND cohort Jerry Foss), whom I profiled quite a few years ago. “Wild Bill,” who was another teenage idol of mine –- I can’t tell you how many times I saw the L.A. Dart perform at OCIR and Irwindale and national events –- was a very close friend of Doner’s. The first time I met Shrewsberry face to face, it was Doner who introduced us as we were all walking in together to the Prudhommes’ Christmas party, which I fanboyed here. Shrewsberry, who lived close enough to Doner to be his regular ride to and from the airport in his final years, gave me an elbow nudge to the ribs when the opening video famously showed him driving the L.A. Dart while standing up through the windshield; Doner sure rubbed off on people.)

Anyway, back to my "dirty joke" analogy.  I set up my tape recorder to capture it all to share here, but the transcript ended up looking like one of the redacted government documents. Nope, can’t use that word. Or that story. Enjoy them? Hell yeah, but reprint them? Not here. Sorry. It was that kind of night, just the kind that was perfectly irreverent to celebrate the life and times of William Lee Doner. 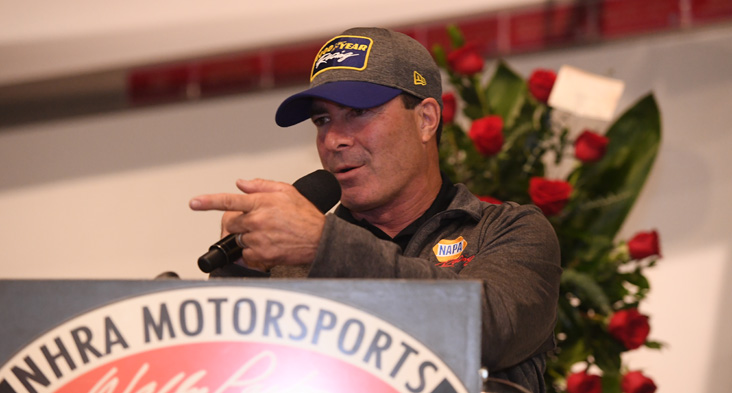 As Capps cautioned once, “If anyone is easily offended, you may want to get up and leave now.”

“Immediately,” echoed Prudhomme with a smirk from the audience.

Capps told of being in awe to be around legends like Prudhomme when he started driving for him and all of the other legends who would descend on their pit to tell stories.

“Every single story starts that way: ‘Man, I don’t know if I can tell this in public, but this one time …’ “ 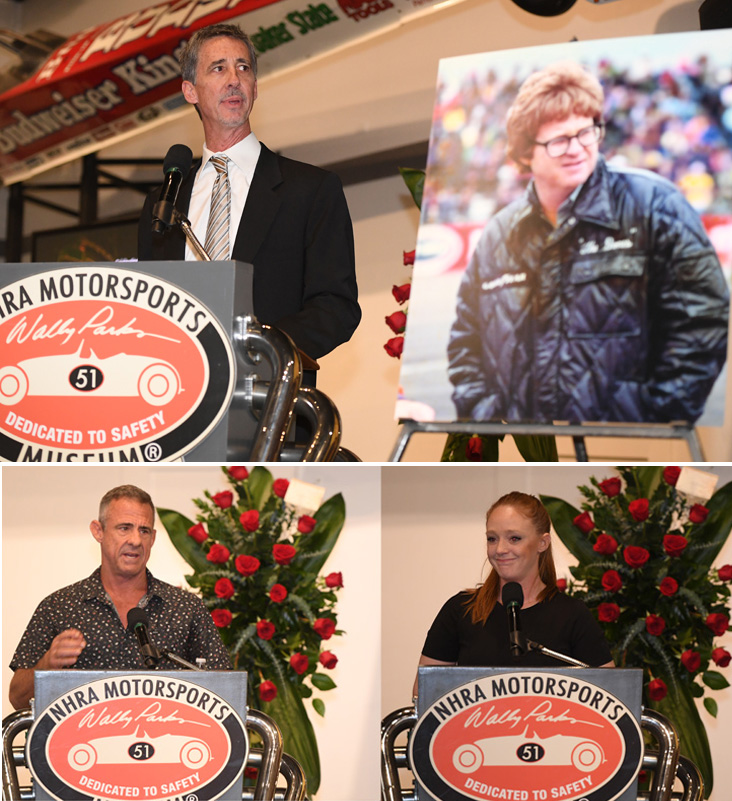 The night kicked off with the Doner family sharing their memories of the guy that even they called “Dones,” with sons Brian and Jeff and granddaughter Tess. The boys talked about growing up in their dad’s world, about trips to the drags, and about how well he treated them, while Tess had everyone on the verge of tears talking about -– and crying through -- her love for her grandpa. 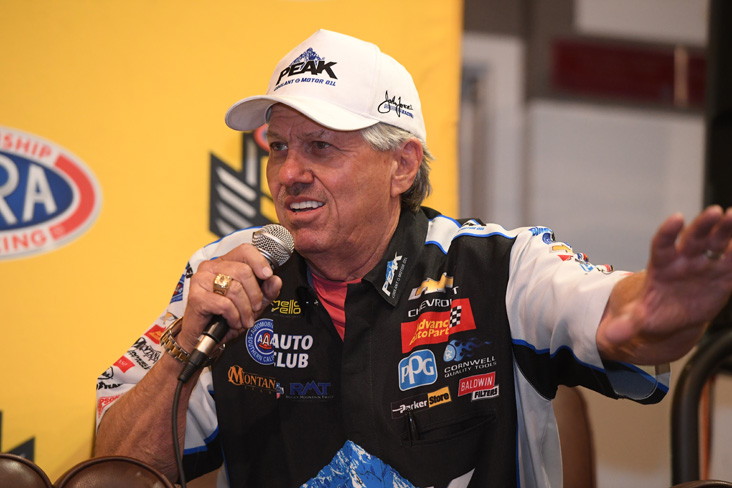 Force, who at one point left the stage in mock –- or perhaps real -– embarrassment as the ribald stories were spun in front of Tess, eventually came back to the stage and told her, “There are people in this room that are like Greek gods, and this is a world where Doner took us all to the next level. Well, he never took me – I’m still trying – but he took what we did and he was magic. Bill Doner was P.T. Barnum. He was a special individual. I was the only guy who could get away calling him collect because he knew I didn’t have any money. But when push came to shove and it was hard times, your grandpa was there when I couldn’t feed my kids.” 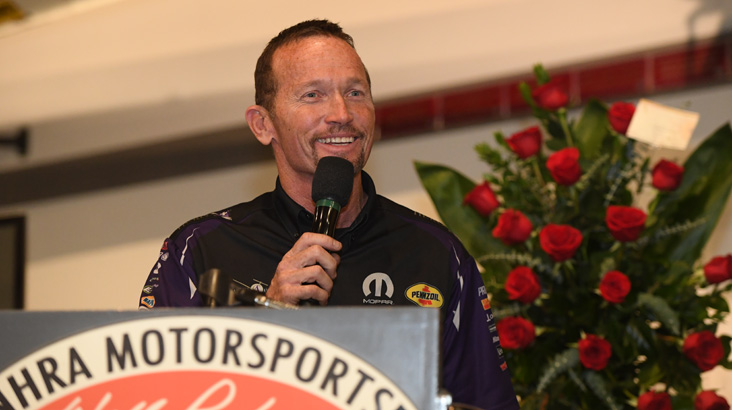 Beckman said his love affair with drag racing began at age 8 when attending races at Orange County Int’l Raceway that were promoted by Doner -– “races where my uncle had to put his hands over my eyes six times a day because of the stuff that went on at those races” –- lauded Doner as “bigger than life” and remembered every time that Doner asked him to come to a function to speak that he still felt like that little kid: “Bill Doner is asking me if I’m going to come speak.”

The format brought two panels to the stage -- McCulloch, Ruth, and Force in the first, then Prudhomme, Couch, Galvin, and Achs -– to share their thought and memories. Seated on stage in comfortable easy chairs, they spun their tales. 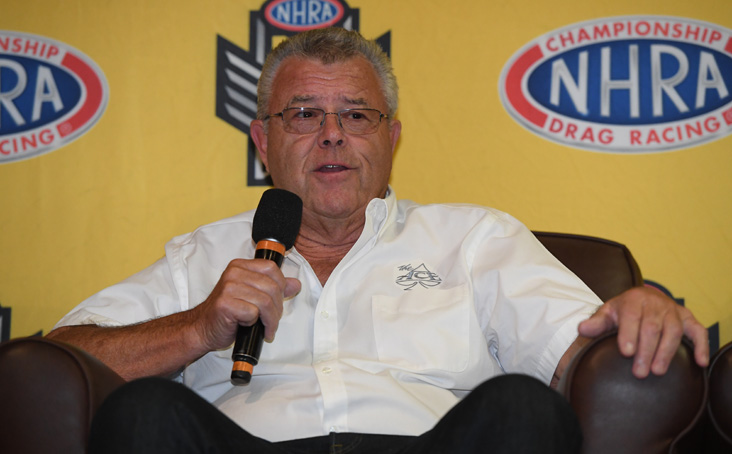 McCulloch, who was one of Doner’s reliable stars during his years in the Northwest, reiterated past stories about how Doner took care of the racers he hired in, that if he were unable to pay the full booking fee due to weather or a small crowd, he’d always take care of them down the road, and then some. And it was a two-way street; McCulloch was always obliging to do whatever “the Dones” needed.

“I’d hear over the PA, ‘Ace to the tower,’ and I’d go there and he’d say something like, ‘I need you to do a burnout down the return road’ and I was always, ‘Dones, if that’s what you need, that’s what I’ll do.’

“He lived a very colorful life, and by doing that, he made our lives sometimes pretty colorful, too. We had a lot of fun …” 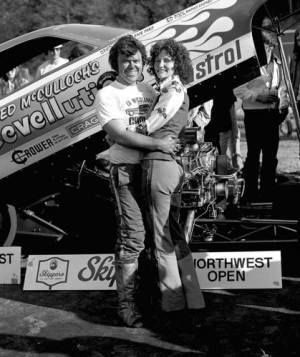 And then he was interrupted by Prudhomme, insisting that McCulloch tell “the Linda Lovelace story.”

So he told it again -- “For the three people in the audience who haven’t’ heard it before,” Beckman noted -– and as he always has when the topic of the adult-film star as grand marshal/race-winner “prize” comes up, “Ace” backpedals as good as he ever did on the track, claiming to have said “Linda who?” when Doner told him, Jeb Allen, and longtime compatriot Steve Woomer of his plan at the Red Lion Hotel near the Sea-Tac airport that often served as Ground Zero for SIR hijinks and how Doner paid him –- as promised -– with $1,000 bills … “and I’ll leave the rest to your imagination.” 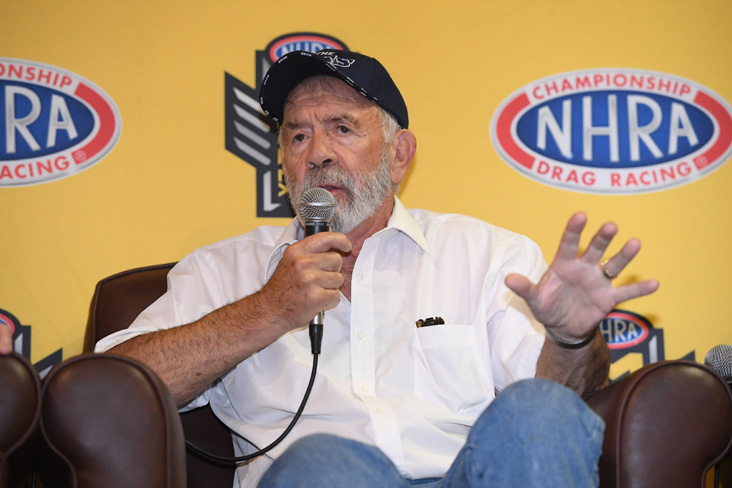 Ruth, the legend “King of the Northwest,” lauded Done as “the kind of guy who could make a happening out of nothing. He could work the crowd like no one, and have the fans chanting “64 Funny Cars” and he’d record it for those radio ads, back when radios ruled the nation. Fox Hunts! Girls in free!” 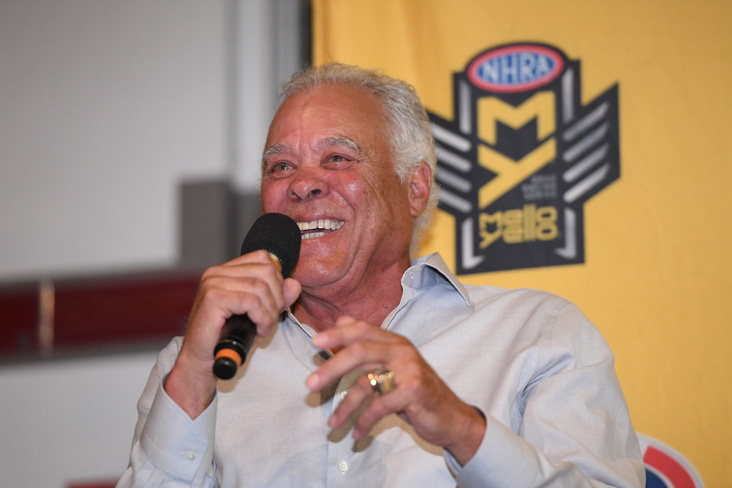 Prudhomme had the best –- and the least shareable -– tales, revolving around hotels and some eye-opening late-night discoveries in the hallways of said establishments. He laughed so hard telling them that I thought he might bust a gut. It felt like we all were. Sure, Prudhomme was Doner’s meal ticket and, fair to say, vice versa, but there was a lot of genuine love, too. It’s obvious everyone time ‘Snake” trades that mischievous twinkle in his eyes for that wistful look in his eye and starts talking about him.

“I was really close to him, to the day he passed,” he said. “I loved the guy. We had so much fun.

“He was the greatest drag racing promoter that ever came along. He gave us all jobs. From Orange County to Oregon, took care of us, We didn’t have to go back east. He’d keep us in California or the Northwest so we could make a living. We were all crazy about him. He was simply the greatest.” 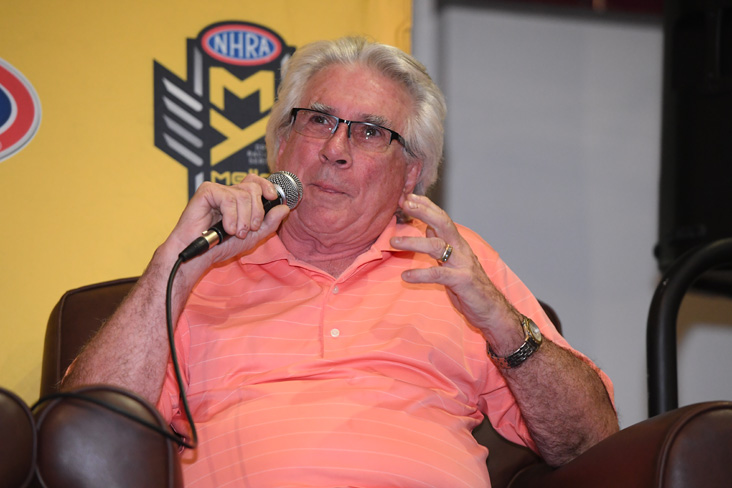 Achs, who raced nitro cars in the Northwest out of Canada, had been friends with Doner since the 1960s and remained great friends for life.

“He’d come up to Canada to help us promote some events for a few weeks, and he left our faces were sore from laughing,” he remembered. We stayed in touch through the years, going fishing or traveling to Europe and South America. I  feel very honored to have a lot of friends that I met through racing and hold them in awe what they’ve done, but I’ll really miss Bill.”

As Capps reiterated, “Everyone says, ‘When Doner called, and there was a trip or anything planned, you didn’t say no.’ It didn’t matter what it was. Fishing trip, Cabo, USC game. You went.” 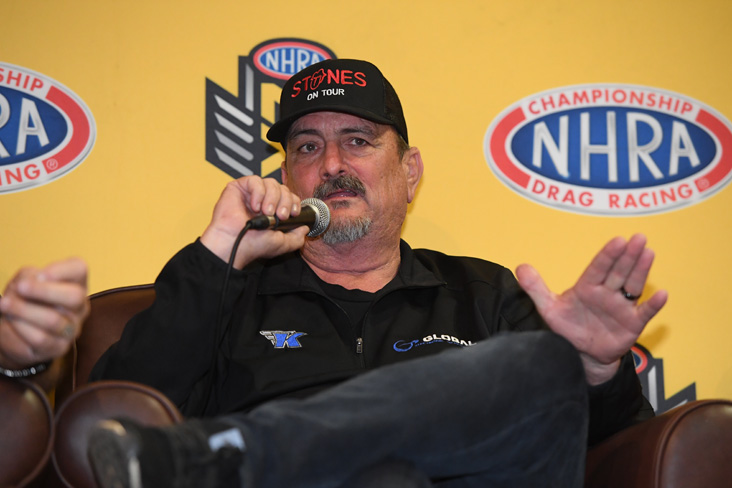 Galvin remembered a time when Doner invited him, the Prudhommes, and a group of others to see a Rolling Stones performance. Guns and Roses was the opening act but came on 90 minutes late, and Doner entertained his party the whole time, probably without breaking a sweat.

“Another time Bill comes up to me and Lynn [Rose] and says, ‘[Rock star] Gregg Allman is here [at OCIR]. Show him around and take care of him,’ so we did. We carte blanched him everywhere. Then he says he’s playing a concert that night at Arthur’s [a local restaurant/concert venue] and invites us. He had a limo and everything.

“He gets up and plays and the fans treated him like he was Don Prudhomme. Later on, we found out he was [an impersonator] and was duping everyone in the area. We told Doner about it and he said, ‘What’s the difference? You got to hear a free concert.’ He did a pretty good; we fell for it and Doner had an answer for everything."

Doner’s world touched so many other worlds, especially in sports and entertainment, The photos in the opening video at the service showed him with so many celebrities I lost count. 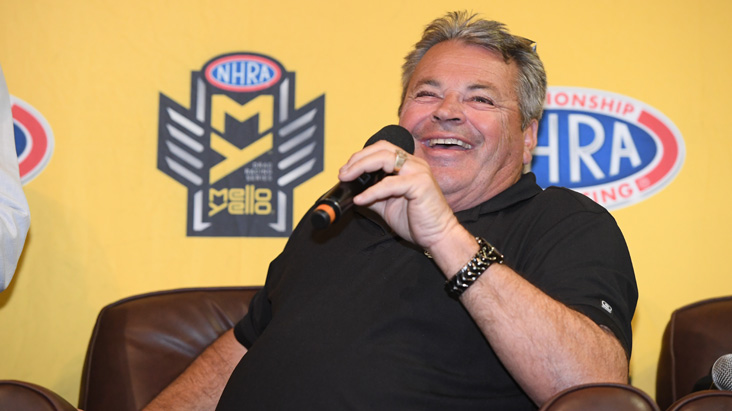 Couch remembers that, too. “We were racing in Phoenix one year and Doner says to me, ‘Kid, I hear you like Jimmy Buffet. I hear he’s playing in town. I’m going to go over there; do you want to go?' We drive out there to this airport where the concert is and Dones drives right up to the stage. Next thing I know we’re on stage like 20 minutes from the track and I’m thinking, ‘How did this happen?’ but if you knew Dones, he made everything happen.”

In our world, he did. There will never be another Dones, but maybe that’s why we loved him so much and will keep telling Doner stories until we can’t anymore.