Doug Kalitta isn’t taking his top spot in points for granted. The chance for the Top Fuel veteran’s first world championship is one of the top stories of the Mello Yello Countdown to the Championship, but Kalitta won’t let it interrupt his ultra-focused mindset.
08 Oct 2019
Posted by NHRA.com staff
Feature

With nearly the slimmest of leads and four races remaining in the 2019 NHRA Mello Yello Drag Racing Series season, Doug Kalitta isn’t taking his top spot for granted. The chance for the Top Fuel veteran’s first world championship is one of the top stories of the Mello Yello Countdown to the Championship, but Kalitta won’t let it interrupt his ultra-focused mindset.

He currently leads defending world champ Steve Torrence by just two points heading into this weekend’s NTK NHRA Carolina Nationals at state-of-the-art zMAX Dragway, a race that marks the halfway point of the Mello Yello Countdown to the Championship. Kalitta might have the points lead and a strong track record of success in Charlotte, but he knows things can change in a hurry in a loaded Top Fuel class filled with championship contenders.

“We are not getting ahead of ourselves by any means with this points lead,” said Kalitta, who has 46 career wins. “There are too many tough cars out there and four more races. Anything can happen. We just are glad to be in control of our own destiny. If we take care of our business we will be just fine. These next couple of races starting with Charlotte will be critical for us.”

Steve Torrence (Top Fuel), Ron Capps (Funny Car), Jason Line (Pro Stock) and Matt Smith (Pro Stock Motorcycle) were last year’s winners of the event that will be televised on FOX Sports 1 (FS1), including live final eliminations coverage starting at 2:00 p.m. (ET) on Sunday, Oct. 13. It is the third of six races in the Mello Yello Countdown to the Championship, and the 21st of 24 races during the 2019 NHRA season, and Kalitta appears to be hitting his stride at the perfect time. 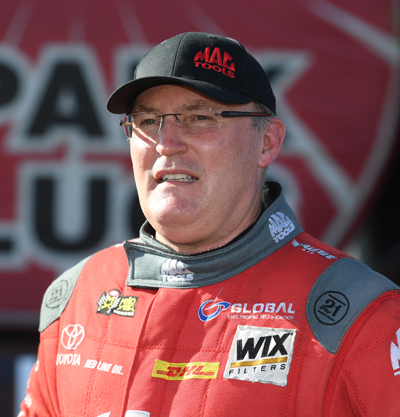 He won at Indy for the first time in his standout career in his 11,000-horsepower Mac Tools dragster, putting him on a good path heading into the playoffs. Kalitta followed that with his 99th final round appearance to open the Countdown to the Championship, but Torrence’s final round in St. Louis nearly evaporated Kalitta’s points lead. But he has been through this before and knows that nothing will be decided until the final race of the year in Pomona. Kalitta, though, wants to be in the best position possible when that arrives, which means trying to add another win in Charlotte.

“There are two races down and we still have the points lead,” Kalitta said. “It has tightened up but we will be ready in Charlotte. This battle is going to come down to Pomona and we just want to be in that battle. I would say we have done a really good job of maximizing our efforts and performance since the Western Swing. We had an awesome Indy and a great start to the Countdown. Our goal now is to keep moving in a positive direction with this Mac Tools team.”

Kalitta won the fall race at zMAX Dragway in 2017, but Torrence has won the three events at the track since then. Kalitta, who has five final-round appearances in Charlotte, will also try to keep the likes of Mike Salinas, Brittany Force and Leah Pritchett at bay, but he’s also keeping things in perspective. The goal is another strong outing at zMAX Dragway, keeping the points lead for another race and building toward what he hopes is the biggest finish in his impressive career.

“We have had some good races at zMAX Dragway in the fall,” said Kalitta. “The win in 2017 was a big and we are looking to get another Countdown win this weekend. No one is getting crowned Top Fuel champion this Sunday but you definitely want hold onto the points lead or keep it within a round. It will be an exciting weekend for sure.”

To purchase general-admission or reserved seats, call 800-455-FANS (3267). Tickets also are available online at www.zmaxdragway.com. Kids 13 and under are free with a paid adult. To honor the Salute to First Responders, military and first responders can save 20 percent on tickets at the gate.