In the Countdown battle for the first time, Alex Laughlin returns to site of first win

When Alex Laughlin scored his first career Pro Stock win at the 2016 AAA Insurance NHRA Midwest Nationals, he had just missed out on the Countdown to the Championship by a mere two points. Fast forward three years and he's among the favorites to win not just the race but the championship, too.
25 Sep 2019
Posted by NHRA.com staff
Feature

As memorable and thrilling as picking up his first NHRA Mello Yello Drag Racing Series win was, Alex Laughlin remembers feeling that something was missing. The Pro Stock star was in his first full season and missed out on the Mello Yello Countdown to the Championship by a mere two points in 2016 when he won in St. Louis.

It was a meaningful day for Laughlin to get his first career win, though he still wishes it didn’t happen while he was playing the spoiler role. But as Laughlin returns to World Wide Technology Raceway for this weekend’s AAA Insurance NHRA Midwest Nationals, he can aim for a second St. Louis win knowing he’s now racing for a championship. Laughlin qualified for his first-ever Countdown to the Championship in his Havoline Chevrolet Camaro, and currently sits third in points heading into the second of six playoff races.

“That race was just about the time we started running well and qualifying well, and it was so cool, but it kind of stunk because we weren’t in the Countdown,” Laughlin said of his 2016 win. “I didn’t really want to be considered the spoiler because I wasn’t in the Countdown, especially because we had missed it by two points. But it definitely makes you appreciate it more now. Things are as good as they’ve ever been and there’s no reason why we can’t keep it up and get some more wins.”

Steve Torrence (Top Fuel), Robert Hight (Funny Car), Tanner Gray (Pro Stock) and Matt Smith (Pro Stock Motorcycle) were last year’s winners of the event that will be televised on FOX Sports 1, including live final eliminations coverage starting at 2:00 p.m. (ET) on Sunday, Sept. 29. It is the 14th of 18 races in a 2019 NHRA Pro Stock season that’s been a breakout campaign for Laughlin. 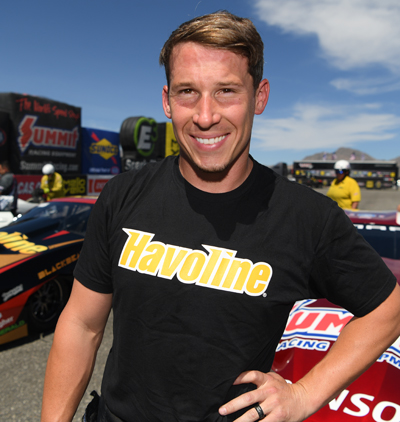 He’s been near the top of the points standings all season, advancing to three final rounds before winning in Indy at the biggest race of the year. That gave Laughlin plenty of momentum heading into the playoffs, where he started with a quarterfinal showing in Reading. But Laughlin insists the pressure is off after winning at Indy, and anything that comes his way during the Countdown to the Championship is simply icing on the cake.

“I don’t really feel a lot of pressure because we’ve achieved so much already this season,” said Laughlin, who has three career wins. “It’s been a heck of a season and I couldn’t ask for anything more. I have all the confidence in the world in my crew chief (Brian ‘Lump’ Self) and having a good car is the least of my worries. Anything from here is a bonus for us.”

Competing for a championship is definitely a big bonus, and Laughlin heads to St. Louis 55 points behind Jason Line, who won the opening playoff race. He’ll also race against championship hopefuls like Bo Butner, Erica Enders, Jeg Coughlin Jr., Matt Hartford, Greg Anderson, and Deric Kramer. Laughlin was solid in qualifying at Maple Grove Raceway to open the Countdown to the Championship, but he’ll look to be strong for the entire weekend in St. Louis. He’ll be pulling double-duty racing in the E3 Spark Plugs NHRA Pro Mod Drag Racing Series in his turbocharged Hot Wheels Camaro, but Laughlin won’t have any trouble staying locked in on the task at hand.

“Reading wasn’t really a bad race, but it wasn’t a great race,” Laughlin said. “We qualified well but weren’t good on raceday. But I think we’re still in a good spot. I’m not worried about why we struggled on raceday a little bit. Those things happen. But we got it out of the way and I think the next five races are going to be good.”