Bob Tasca III spent a lot of time on the phone in the week between winning the NHRA Thunder Valley Nationals and getting back into his Ford Mustang Funny Car at the Summit Racing Equipment NHRA Nationals. Many of those calls were with Ford executives. Between the talks of congratulations and accomplishment, there was also a solemn apology, Tasca said, “I was sorry it took so long.”
A trio of those Wallys will undoubtedly end up in the Dearborn, Mich., offices of Edsel Ford, Bill Ford, and Henry Ford III. All three men, pillars inside the company, reached out to Tasca to congratulate him on shining a bright light on the organization Henry Ford founded in 1903.

Tasca’s hunt for his first win since 2012 began in earnest when Ford left profession ranks of NHRA Mello Yello Drag Racing in 2014. Tasca says he respected the decision but wholeheartedly disagreed with it. That disagreement manifested in his commitment to bring the company back to the dragstrip by any means necessary.

“I went to board meeting after board meeting to the point where I wasn’t sure if the next one would be my last one,” said Tasca. “What kept me going back was the energy and the enthusiasm of the Ford fans at the dragstrip that would ask me when Ford was coming back.”

It’s possible, perhaps even likely, that there is no bigger Ford fan than Tasca. His grandfather sold Fords. His father sold Fords. Tasca sells Mustangs just by existing, forget the dealership his family operates in Rhode Island (we’re kidding — please do not forget about it). The number of times Tasca exhales the words Blue Oval, Dearbor, and Ford should not be nearly as endearing as it is, but he’s not a salesman in the way that stiffens backs and quickens pulses. He loves Ford Motor Company the way NHRA fans love the smell of nitro.

“Bob is passionate about everything he does, but his love for drag racing is contagious,” said Henry Ford III. “I’ve gotten the chance to see him race through the years, and for him to earn the new Ford Mustang’s first win on Father’s Day was incredible to watch.”
Tasca’s belief in drag racing brought Ford back to the strip, and his commitment to winning, as strong as any other competitor in Funny Car, ultimately brought him to the winner’s circle on Father’s Day weekend with his sons in tow. It wasn’t easy. In fact, it was excruciatingly difficult. But now, Tasca hopes the dam is broken and he can finally fight for that elusive championship.

Tasca assembled his team ahead of the 2018 season. He hired Eric Lane, who also served as his crew chief while running part time. Tasca’s first full-time season did not go as planned. He failed to make the NHRA Countdown to the Championship, let alone win a race. The team started out with a six-disc clutch in the car, a more aggressive approach that Tasca believed in, before eventually moving to a five-disc setup that Lane utilized while working Rahn Tobler at his previous stop.

“I just believed with how we were running the car that pulling the power back like that was not going to give our team the best chance to win the championship,” said Tasca. “I know that Tobler and [Make-a-Wish Funny Car tuner] John Collins have a lot of success with that setup, and I certainly cannot speak to that, but I am just more comfortable with the six-disc setup.”

Tasca hired Mike Green ahead of the 2019 season to bring more experience to the team. That was one of two major changes made entering preseason testing. Ford brought a new body to the Mustang Funny Car, which provided a whole new set of challenges to a team that was already trying to get back on its feet after a difficult 2018. 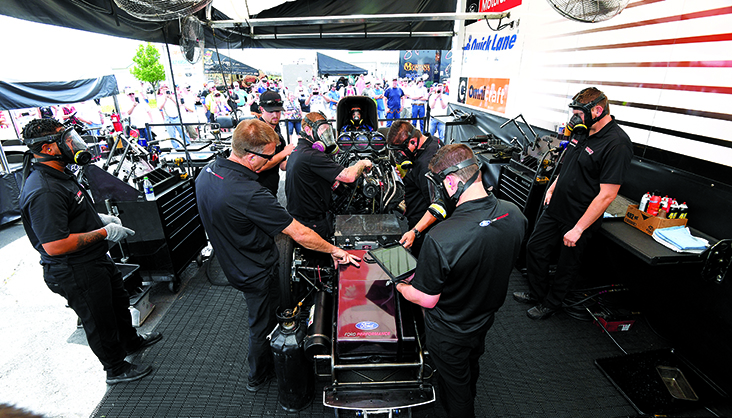 The new body came with significant positives, too, beyond the positive sentiment connected to Ford’s continued commitment to drag racing. Tasca raved about the aerodynamic package, the improved vision from inside the cockpit, and the new burst panel. It did mean that Lane and Green had to learn how to tune around a new package, though, which is challenging no matter what body style you’re working with.

Those challenges compounded when Tasca and Green parted ways seven races into the season. Green ended up at John Force Racing and tuner Jon Schaffer came to Tasca’s team. Mike Neff, who is available in part because of Tony Schumacher’s absence, also began to assist Schaffer and Lane. That package seemed to do the trick.

“I had a lot of respect for Eric before, but I’ve got even more respect for him now,” said Tasca. “He checked his ego at the trailer, and we literally flushed everything we worked on for the last year and a half down the drain and started over. Jon walked into the shop, and I told him that I didn’t want a single part on this race car that he didn’t want on it when we went to Richmond.”

The entire team burned the midnight oil for the next 10 days and essentially tested on the track during the Virginia NHRA Nationals. Tasca says from that point, the team never looked back.

“I’ve never been around a better group of guys with Mike and Eric and Jon that are working on the car before,” said Tasca. “The decision-making in the trailer has been really, really good. I don’t think anyone can bet against these three guys. I’ve always been good at the sell on Monday, but I’ll tell you what, the win on Sunday stuff is really hard.” 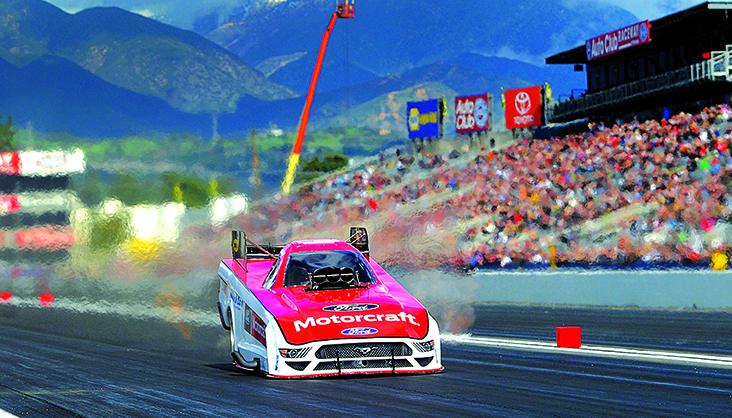 Tasca entered the NHRA Thunder Valley Nationals with a 6-10 round record. His best qualifying position to that point was fifth. He put his Ford Motorcraft Mustang in the No. 3 position after making a pair of solid runs on a difficult surface. His car had made it down the track 80 percent of the time since bringing Schaffer on board with an average elapsed time of 4.046 seconds.

Things looked good, if not dominant. Then race day rolled around, and Tasca flat out dominated a year after finishing as a runner-up at the same event. He made it down the track on all four runs, a seemingly impossible task at Bristol Dragway, with an average time of 4.04 seconds.

“The driver is responsible for about 5 percent of what happens out here, and anybody who tells you differently, and I’m being honest, is full of s*#!,” said Tasca. “It’s 95 percent the team. It’s all the guys and gals behind me whether they be the crew chief, the crew, everyone at Ford, that’s who’s responsible for a win like this.”

That discounts, at least in part, who helped bring the team together. There is no team without Tasca. No win comes by the hands of an individual, but this win must mean something extra special to the man who cared so much about bringing the company he loves back to the winner’s circle. He also knows the job is far from done.

He’s right. But this race didn’t look like a fluke. Tasca called this race a career highlight for a reason. Yes, it marks a milestone because of what it took to get back here, but the team looks set up to go do it again. There are no guarantees in racing, no matter the circuit, but having a car that you expect to win races is a rare thing in motorsports. Tasca knows that, and you can hear the excitement in his voice when he talks about his team.

“I’ve won races, but I’ve never won a race like this,” said Tasca. “I’ve just never had a car like this before, where we’re going to show up to races and expect to win. I talked to Zippy [Mike Neff], and he said what’s great about this race is that we’re going to go to the next one and not have to change a thing.”

Tasca and company have adapted admirably over the past 18 months to every curveball that has come their way. If Bristol is any indicator, expect to see a Ford do a lot more winning on Sunday.