Behind the Visor: How Erica Enders went from Jr. Drag Racer to Pro Stock champ

Erica Enders got her start in the Summit Jr. Drag Racing League and now battles for world championships year after year. Here's how she got where she is, in her own words.
20 Jan 2019
Jacob Sundstrom, NHRA National Dragster Associate Editor
Feature

Erica Enders began racing in the Jr. Drag Racing League at the age of 8, but she has been involved in NHRA Drag Racing her entire life thanks to her father, Greg. Enders received her first national event victory at her home track in Baytown, Texas, at the age of 20 in Super Gas and made her Pro Stock debut in 2005 while racing for Victor Cagnazzi.

She has gone on to win a pair of world championships in the Pro Stock category while racing for Elite Motorsports. Enders was named NHRA Sportsman rookie of the year at the age of 16 in 2000 while racing in Super Comp, earned a Jr. Dragster championship in Division 4 in 1993, and claimed her first Pro Stock national event win in 2012 by defeating veteran driver Greg Anderson.

My dad raced his whole life, so my sister Courtney and I grew up around NHRA Drag Racing. I wanted to be like my dad; I wanted to be a race car driver. My dad did it as a hobby, but it was always something we did together as a family. He raced in Super Gas. I remember he had a pickup truck called Well Adjusted, and he also had a Corvette roadster and a couple of Super Comp dragsters over the years.

I was fortunate because the NHRA came out with the Jr. Drag Racing League around the time when I was old enough to get into it. I remember vividly being out in the garage with my dad, working on his car and flipping through NHRA National Dragster. After seeing the ad for the Jr. Drag Racing League, I slid under the car on the creeper, showed my dad, and said, “Look, they’re letting kids drive. Do you think I can do it?” He said I had good enough grades, so he didn’t see why not.

My sister is three years younger than me, and so I started as soon as I could (when I was 8), and she started right behind me. It was sort of just our family deal. I did that until I was 16, when my dad sent me to Frank Hawley’s school for my birthday to get my Super Comp license. 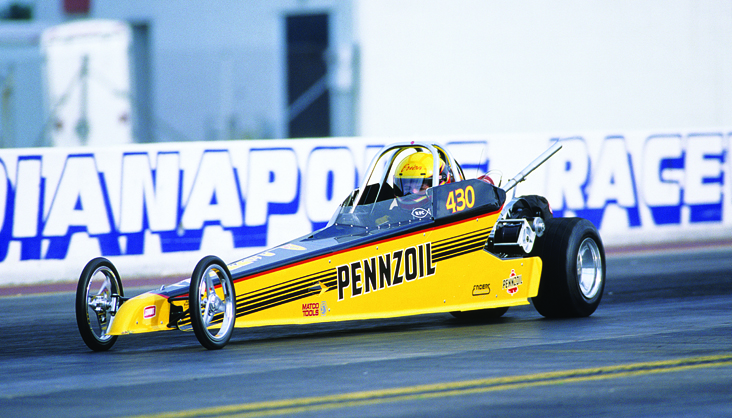 My teacher was actually Jack Beckman, which was such a cool experience for me. Getting into Super Comp was just the natural progression. I raced Super Comp by itself for a year — that was in 2000 — and I got Sportsman rookie of the year. The next year, I raced Super Gas as well and then raced both for the next five years. That’s how I got into Pro Stock — sort of.

I got my first national event win at home in Baytown, Texas, in Super Gas. I was doing an interview because I had actually just gotten my license for Top Alcohol Funny Car and was in discussion with a nitro Funny Car team. That was my next step and my plan. They asked what intrigued me and what was next for me, and I said I really, really love Pro Stock. I probably should have said I love nitro Funny Car, but for whatever reason, that’s not what came out of my mouth. 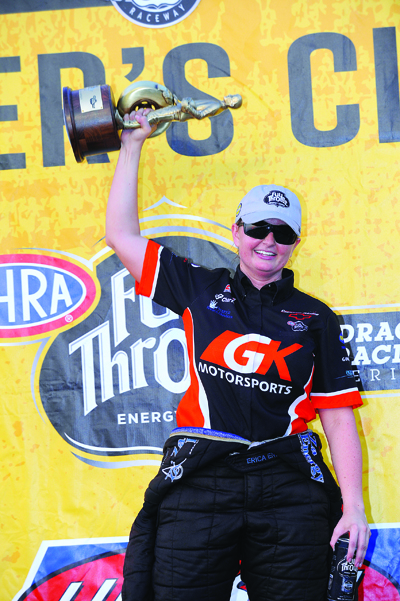 Next thing I know, I got a call from Victor Cagnazzi. Later that week, he flew my dad and I out there, and a few weeks later, I had a job driving Pro Stock even though I had never driven one before. We took the rest of 2004 for training and practice and all that stuff and made our Pro Stock debut in 2005. It was this crazy, whirlwind thing.

NHRA provides a great platform to stair-step your way into the Pro categories, starting with the Jr. Drag Racing League. I always speak volumes about it forever just because it teaches you so much about sportsmanship and about how to win and lose gracefully and all that stuff. If racing is the career that you so choose, this is a great way to go about it.

You’re probably going to do a lot better if you start this way when you’re a kid rather than if you just step into a crazy car. I started in Jr. Dragster, so did Shawn Langdon, J.R. Todd, and Leah Pritchett. My husband, Richie Stevens, was the first kid to go pro from Jr. Dragster. The list really goes on and on. That would be my recommendation, but it’s not to say that you can’t go another way by any means. It’s just based upon hard work and surrounding yourself with the right people.

That’s not to say any of this was easy, though. There were a lot of gut-check moments. I don’t care if you want to be a professional NHRA drag racer or a business person in a board room, you’re going to deal with a lot of crap, for lack of a better word. I decided I wasn’t going to take no for an answer, and I wasn’t going to let people kick us while we were down.

It hasn’t been an easy road, and it hasn’t been sunshine and rainbows. People are horrible. It’s getting through those times, and those times make those small victories and the world championships that much sweeter. The biggest gut check for me probably came in 2013 when my crew chief at the time decided he was going to drive my car, and I was out of a ride.

I would be lying if I said I didn’t want to quit. I accomplished quite a bit and had a lot of fun. I had an education I could fall back on, and honestly, I could have made more money going and doing something else. But would I have been happy? No. So, Richard Freeman really saved me in that deal, and in our first year together, we won six races and a world championship, and then in 2015, we were able to top that and win nine races and another one.

It just goes to show that when you think it’s the worst time in your life, there’s still greener grass on the other side of the fence. You just have to have enough guts to get through. It’s not easy. It’s not fun. There are days you put your head down on your desk and cry, but there are days you’re standing on top of your race car with a trophy surrounded by your teammates. That’s why you do it. -As told to Jake Sundstrom