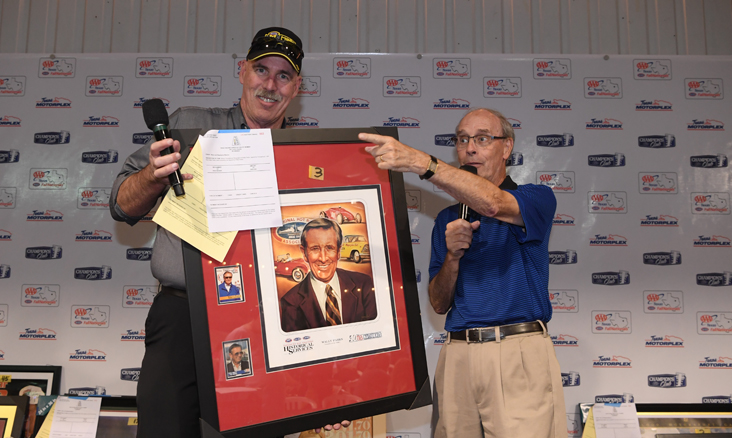 On Saturday night before the final day, the annual Drag Racing Association of Women Auction was held in the Texas Motorplex Champions Club, where Bob Frey and Alan Reinhart served as auctioneers. 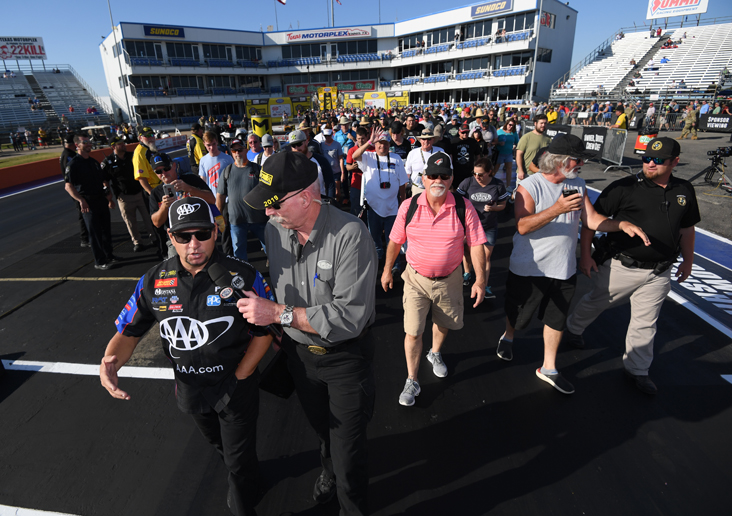 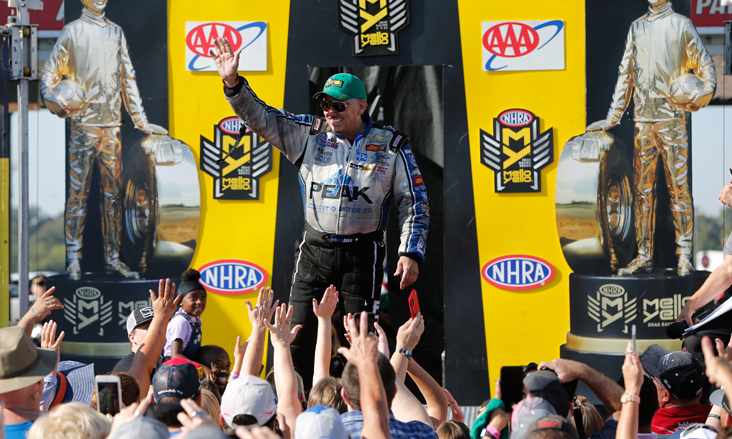 John Force received a hero's welcome when he was introduced as the No. 1 qualifier in Funny Car for the 160th time in his amazing career. 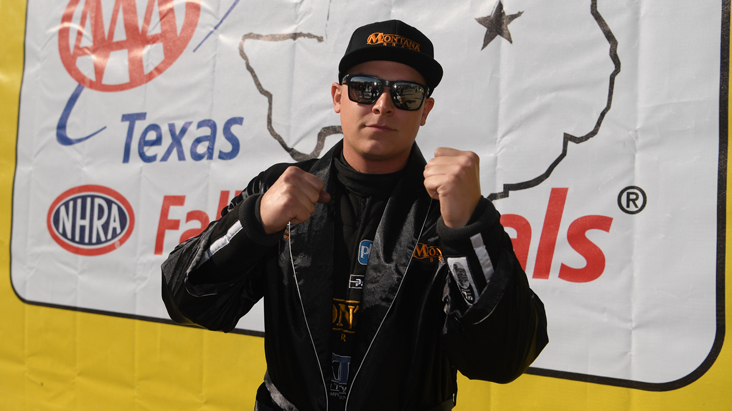 Top Fuel rookie Austin Prock had his dukes up for eliminations. He wore a boxing-style robe and put 'em up for our photographers but was knocked out in the semifinals by fellow rookie Jordan Vandergriff. 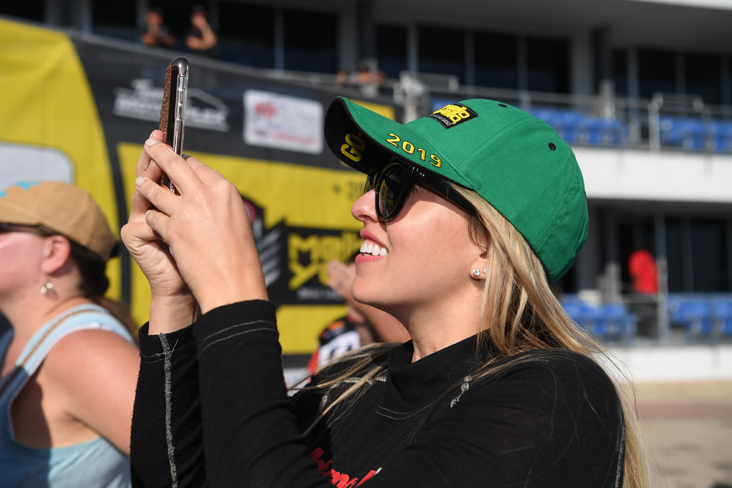 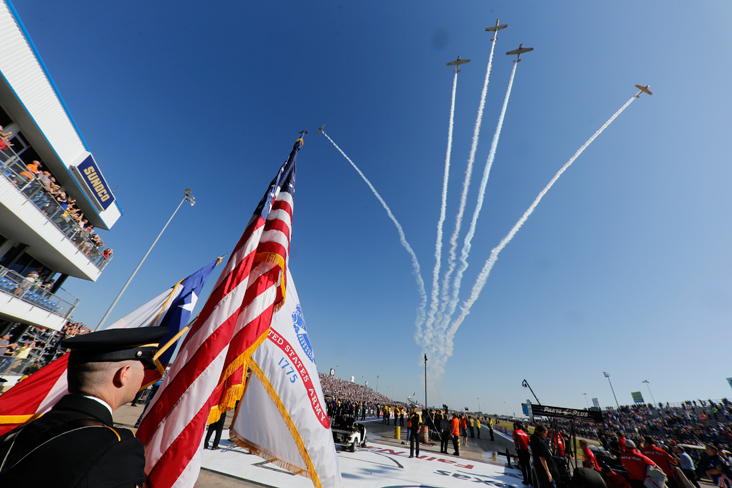 A crowd-pleasing flyover helped ring out the pre-race show and set the stage for final eliminations. 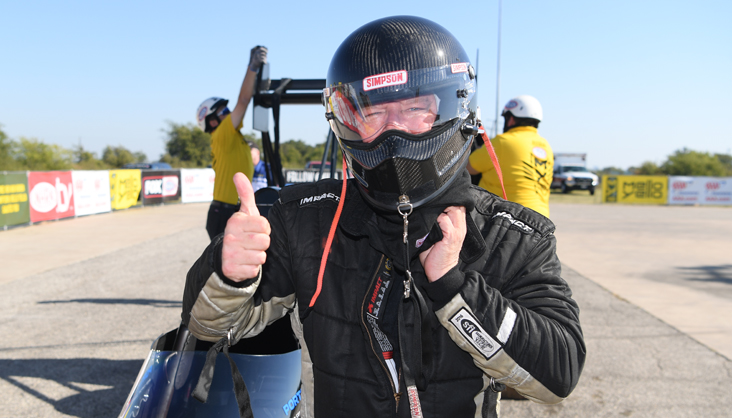 Lee Callaway, who qualified in his Top Fuel debut, also got his first career round win, taking down Mike Salinas in round one. 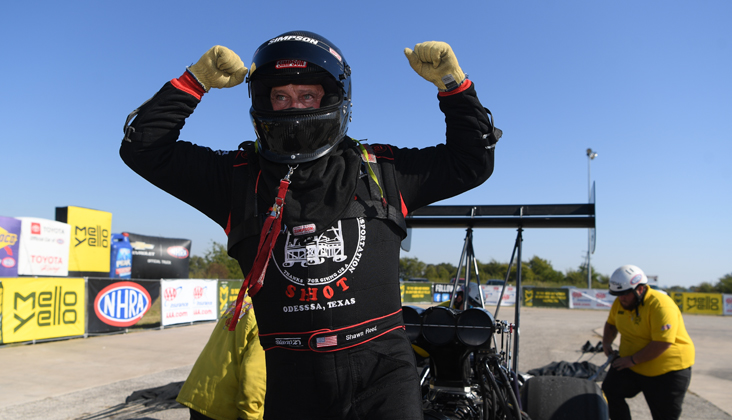 Shawn Reed was pretty pumped up, too, after defeating points leader Steve Torrence in the opening frame of Top Fuel.

Matt Hartford went to the semifinals of Pro Stock and managed to cut into Erica Enders' points lead. 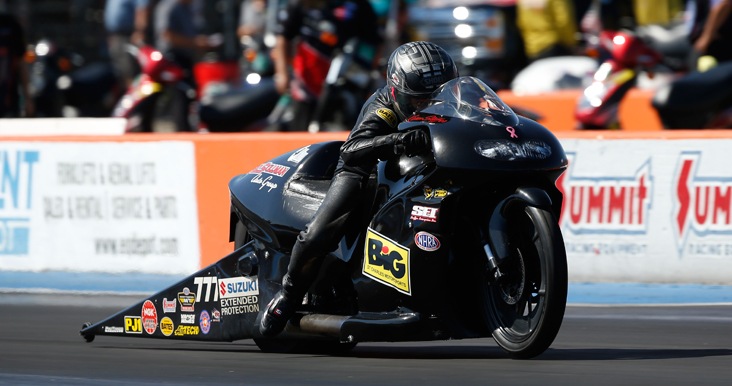 St. Louis winner Karen Stoffer looked good until running into teammate Jerry Savoie in round two. She left on him but couldn't hold the lead, losing by just .003-second. 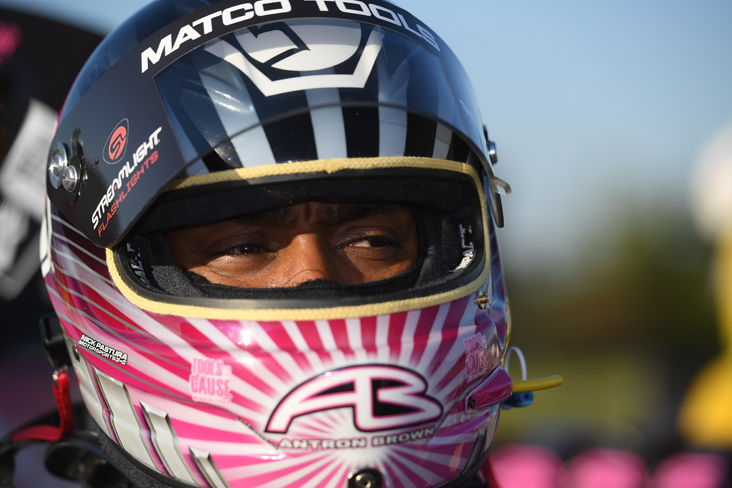 Antron Brown, a two-time Top Fuel winner at the event, fell short of a third when he smoked the tires at midtrack against Brittany Force in round two. 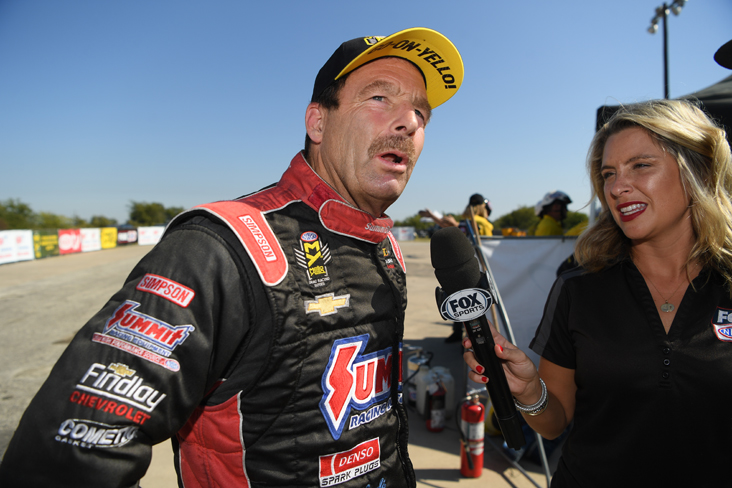 Greg Anderson won his first and semifinal rounds -- against teammate Jason Line and  Deric Kramer, respectively -- on holeshots and had a .003 light in besting points leader Erica Enders in round two. 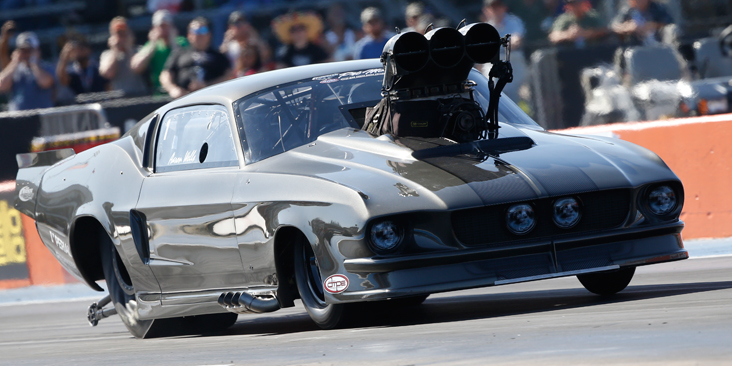 Aaron Wells and his supercharged Mustang defeated Justin Jones in the final round to win the Summit Midwest Pro Mod exhibition event. 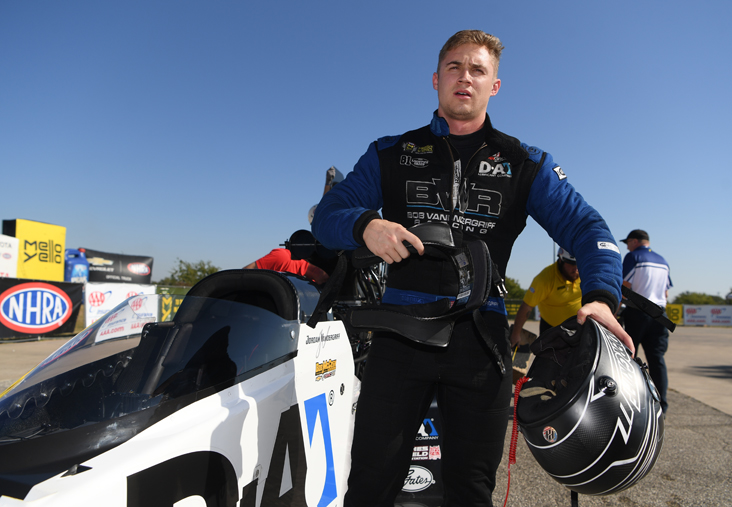 Jordan Vandergriff got turned away in his first Top Fuel final at the place where his uncle Bob got his first, but the rookie racer showed that he's got the stuff to get the job done. 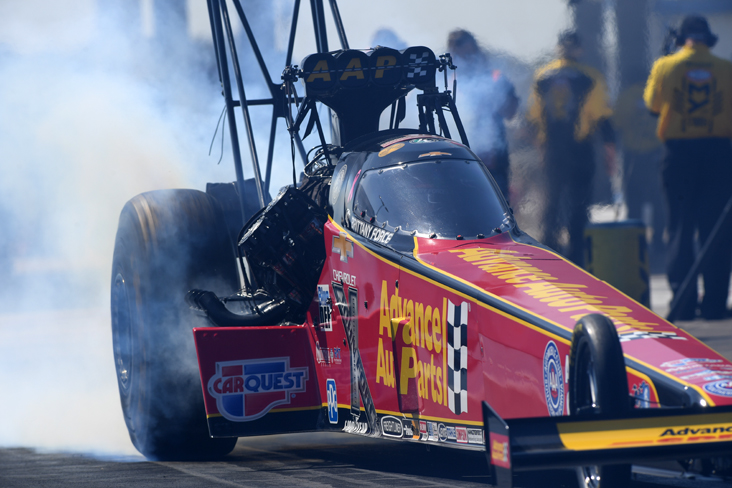 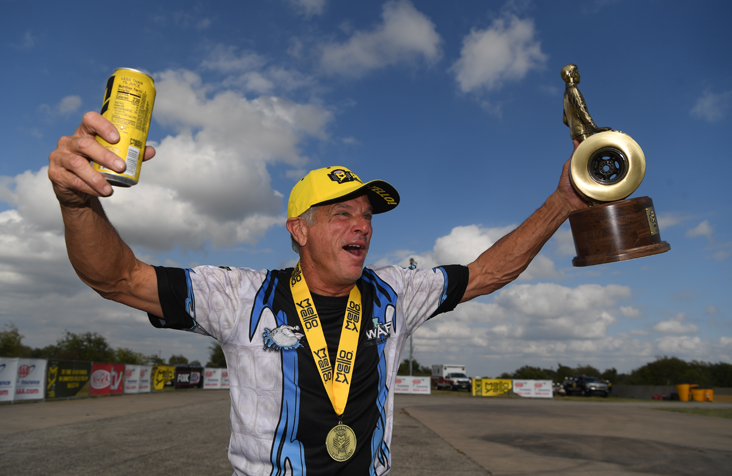 Jerry Savoie was .004  on the Christmas tree in the Pro Stock Motorcycle final round and rode his way to victory to boost his hopes for a second world championship. 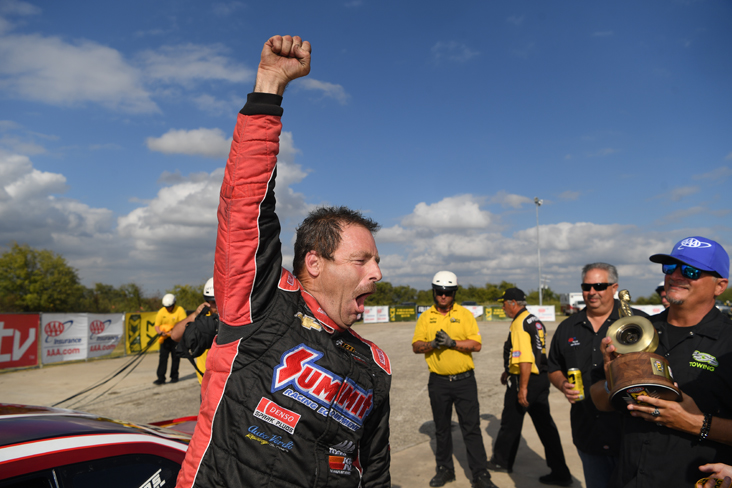 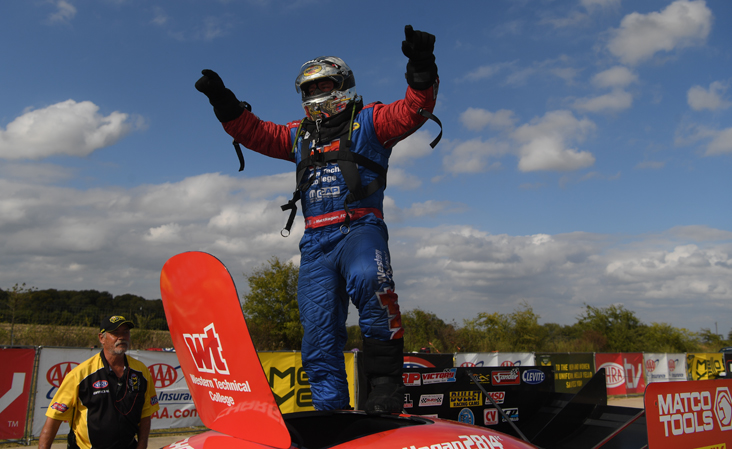 Matt Hagan couldn't wait to celebrate a big win, his third of the season and the first since Epping in early summer. the former Funny Car world champ is right back in the thick of the points battle. 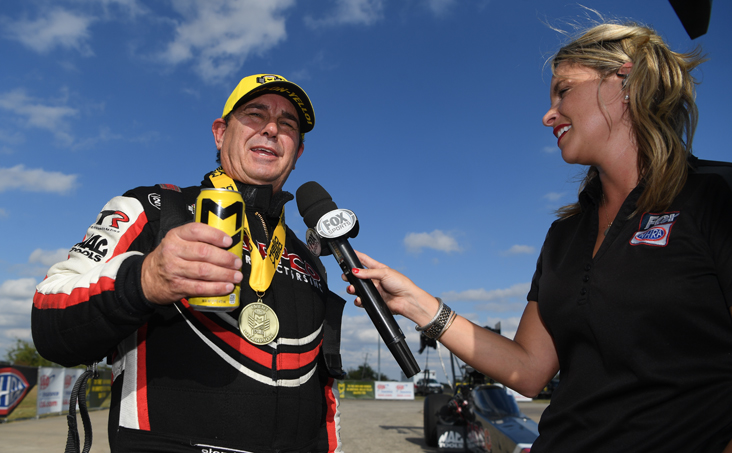 NHRA on FOX reporter Amanda Busick got the scoop from Billy Torrence in what easily was one of the weirdest Top Fuel finals in history. 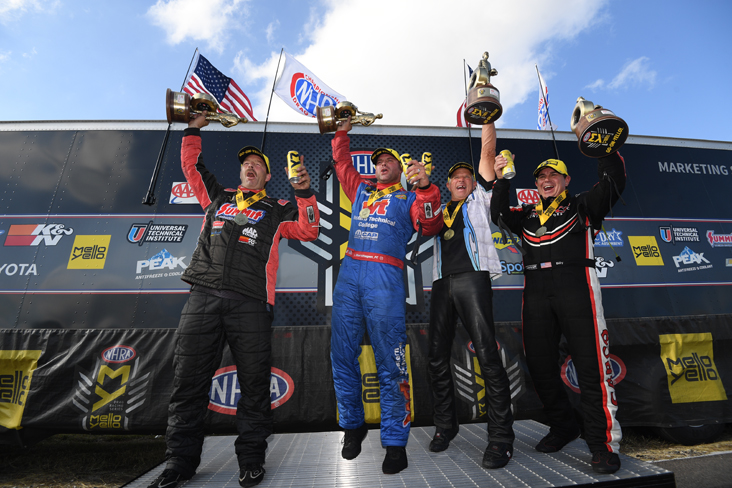