The 50th annual NHRA Gatornationals is fast approaching, but before we head back east, let's take a trip back in time 50 years to Pomona and the 1969 Winternationals, which was memorable for so many reasons.
11 Jan 2019
Phil Burgess, NHRA National Dragster Editor
DRAGSTER Insider 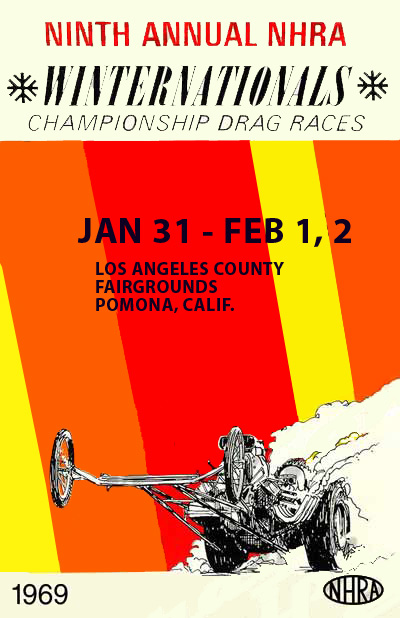 The 2019 season is upon us, kicking off in Pomona in about a month with the 50th annual Gatornationals looming as another major early-season highlight. Gainesville 2019 is going to be a wondrous trip back into time that's going to be a can’t-miss event for hardcore nostalgia fans like you and me, but before we get to the history of Gainesville -- which will be celebrated in a special issue of National Dragster -- let's take a trip back in time 50 years to Pomona and the 1969 Winternationals, which was memorable for so many reasons.

The 1969 season was the final one before the calendar expansion in 1970’s Super Season, where the number of national events went from four – Winternationals, Springnationals, (U.S.) Nationals, and World Finals – to seven with the addition of the Gatornationals, Summernationals, and Supernationals. I’ll do a more in-depth recap of 1969 in a future column, but right now let’s just focus on the final Winternationals of the decade. 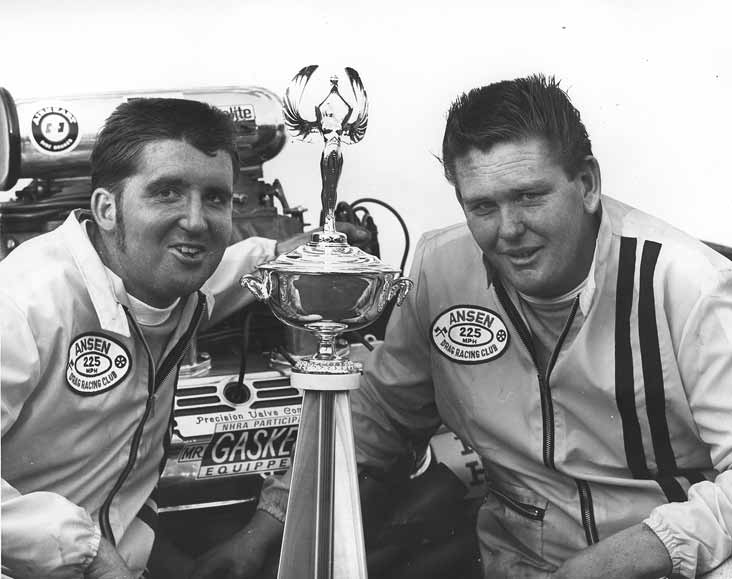 Probably the best thing that happened at the 1969 Winternationals is that John Mulligan won Top Fuel with the Fighting Irish car. I say that for two reasons. The first is that he and partner Tim Beebe were way overdue, having recorded a pair of runner-ups in 1968, to Don Garlits at the Springnationals in Englishtown (you read that right; the event made a one-year stopover between its first home, in Bristol, and its new 1969 home in Dallas) and to Bennie Osborn at the World Finals in Tulsa, where the Anaheim, Calif.-based duo fell just one win short of being crowned world champions. They also set low e.t. and top speed almost everywhere they went and had set the national speed record at 229.58 late in the year (after running a non-backed-up 232.55 en route to the E-Town final), so they were due.

The second reason is a lot more sad in that we lost “the Zookeeper” later that year as the results of burns suffered in a horrific fire in the first round at the Nationals, where had made an astounding 6.43 blast in qualifying (a full quarter-second quicker than Jerry Ruth’s 6.68 national record) and passed away weeks later, just as his star was reaching its zenith.

Mulligan defeated former Winternationals champ Don “the Snake” Prudhomme in the final round, both having run 6.93, Mulligan in beating Leroy Goldstein and Prudhomme with a score over Jim Dunn, but Prudhomme wounded his mighty Keith Black mill on the run and he, Black, and Roland Leong thrashed on it before the final. The engine was not up to the task in the final as Prudhomme slowed just off the line and watched Mulligan rocket to victory with a 6.95 to deny “the Snake” what would have been his fourth career win and second in Pomona. As the photo above illustrates, it was never close.

Another notable fact about the event was the list of DNQs in Top Fuel, which included Don Garlits, Tommy Ivo, Tom McEwen, Mike Snively, John Wiebe, Marvin Schwartz, and Steve Carbone. On the flip side, Larry Dixon set a new track record of 6.81 for low e.t. 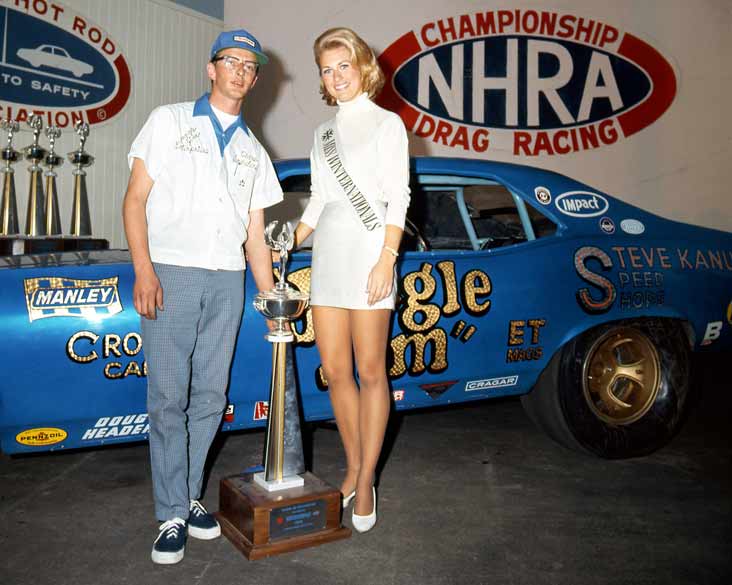 As it turned out, all eight winners of the event were first-time national event champs, including Clare Sanders in Funny Car. By 1969, the Funny Car class was in full bloom and contested at three NHRA national events. After its debut at the 1966 World Finals, the fledgling class was showcased in 1967 at the Springnationals in Bristol, Tenn., and the U.S. Nationals, which were won, respectively, by Tommy Grove and Doug Thorley. NHRA held no Funny Car races in 1968 but returned with three in 1969: the Winternationals, Springnationals, and U.S. Nationals. The latter two were both won by Danny Ongais in Mickey Thompson’s Mach I, but the 1969 season opener was won by 27-year-old Sanders, at the wheel of “Jungle Jim” Liberman’s Chevy II. 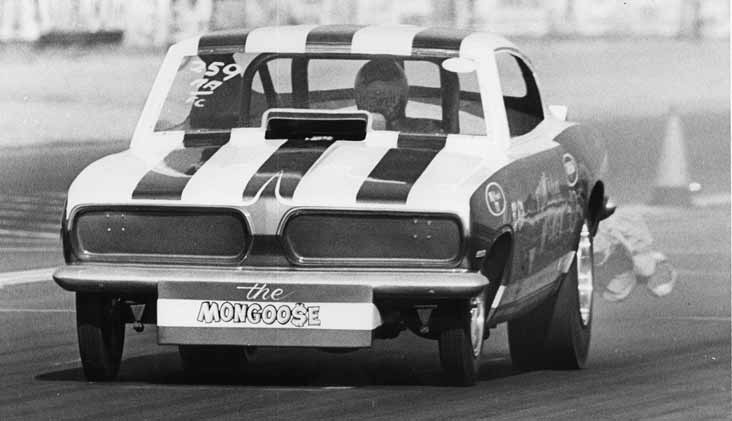 Sanders qualified “Jungle’s” No.2 car – which he had begin driving only the previous fall after much success in the Lime Fire Barracuda – in the No. 3 spot with an 8.03, but seemed light years behind Tom “the Mongoose” McEwen’s stunning 7.79 in his direct-drive Tirend Activity Booster Barracuda (pictured above), which was powered by a 392 Chrysler assembled by Top Fuel champion tuner Beebe. Don Schumacher was No. 2 with an 8.02. Liberman, shockingly, was among the DNQs, along with Ongais, Don Nicholson, Roger Lindamood, Jack Chrisman, Charlie Allen, and Della Woods.

McEwen blew his engine in round one, and Leonard Hughes became the favorite, running 7.86 at 198.23 (top speed of the meet) in round two but blew his second engine of the event in the semifinals and fell to Sanders, who would have been super tough anyway with a 7.80. Ray Alley and the Engine Masters Barracuda defeated Rich Siroonian in John Mazmanian’s ‘Cuda in the other semifinals. As it was in Top Fuel, the Funny Car final was pretty lopsided with Sanders running 7.88 to crush Alley’s 8.11, followed by a Rodney Dangerfield-ish “I don’t get no respect” moment when ABC Wide World of Sports’ Keith Jackson. “Keith walked up to me and said, ‘Congratulations Jim Liberman on winning the Winternationals.’ People were used to just seeing one ‘Jungle’ car, and I was relatively unknown at the time, so I understand why he was confused. I was so happy, I didn’t care, but he was nice enough to reshoot it for the show [which ran the following weekend],” Sanders told us a few years ago.

The ’69 Funny Car show may, of course, be better remembered by the wild top-end flight of Larry Reyes in Roland Leong’s Hawaiian Dodge Charger, which came at the conclusion of 8.14, 181.45-mph first-round victory over Mike Hamby when his mount took flight in the lights and soared 200 feet before crashing back to earth. In one of the greatest quotes I’ve ever gotten, Reyes remembered his trepidation about the big, bulky Charger. "As soon as I got into that car, I didn't like it," he told me. "The braking system didn’t work; it wouldn’t steer or turn. I had to stage in high gear because I couldn't hold the car on the line in low. I said to myself, 'What have I done?' The car was too big, and I couldn't see out of it. I remember sitting on the starting line, ready to stage, with the car idling, yanking the belts tight, and saying, 'Lord, please don’t let me hurt anyone.' " Leong and Reyes came back to win the race the next year and Leong won it again in 1971 with Butch Maas at the wheel; I wrote a column about that three-year rollercoaster that you can read here.

Among the Sportsman winners were a number of names that would go on to great success after their breakthrough victories at this event, including future Pro Stock stars Don Grotheer in Super Stock (which, in all fairness, was more of , a pre-1970-introduction to Pro Stock), Dick Landy in Street, and Ken Dondero in Super, plus Ed Sigmon (still racing today!) in Comp, Dave Grassi in Top Gas, and Mark Coletti in Stock. 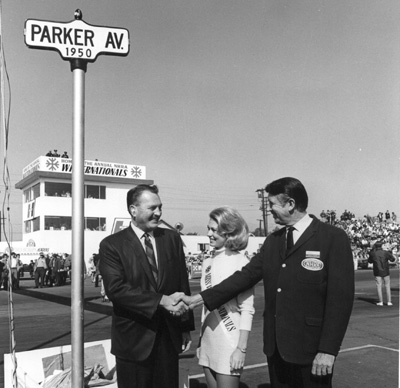 Also, and worth noting, the 1969 event marked the christening of the track as Parker Avenue, in tribute to Pomona Police Chief Ralph Parker, who for years had been instrumental in working with the NHRA to turn a portion of the L.A. County Fairgrounds into a once-yearly racetrack that became known as fabled Pomona Raceway. It was Chief Parker who assigned motorcycle officer E.J. "Bud" Coons to work with the local hot rod club, the Choppers, to follow Wally's famous edict to "bring order to chaos" to help tame the street racing problem in the region. Coons, of course, later became an integral part of the NHRA plans and an original member of the NHRA Drag Safari that crisscrosed the country 1954-56 to spread the word about how to hold safe drag races.