The drag racing world lost another legend with the passing last week of Dode Martin, who ran one of the sport's first dragsters. He is remembered in this week's Dragster Insider, where we also mourn the passing of Gary "Mr. C" Cochran and Steve Hodkinson.
09 Feb 2018
Phil Burgess, NHRA National Dragster Editor
DRAGSTER Insider

The drag racing world lost another legend with the passing last week of Dode Martin, who with partner Jim Nelson were early pioneers in drag racing and were among the first to create a business to sell chassis to other racers. Martin died last Thursday at age 92.

Martin first became interested in hot rods after his service in World War II, where he fought in the Battle of the Bulge. He bought and fixed up a Model A Ford and went to Southern California landmark dragstrip, the Santa Ana Drags, to compete. Before long, following a new trend set by Dick Kraft and Otto Ryssman, he had had stripped the body off of the car and had one of the sport’s first dragsters.

Nelson was a prominent member of the San Diego Timing Association, an NHRA tech inspector (and part-time Drag Safari member), and ran the machine shop for Masters Auto Supply when Martin first him at Paradise Mesa Drag Strip outside of San Diego. Both were dragster drivers from competing area car clubs –- Martin of the Shafters, Nelson from the Oilers -- and when Martin was building a Model T-framed streamlined dragster, obviously influenced by the lakesters running down the dry lakes, it caught Nelson’s eye, and the two began collaborating.

They combined the “Master” name with “drag racing” and came up with Dragmaster as their company name. Their first car, built in 1957, was called the Masters Dragliner because the company was still supplying them with parts. Martin made a fiberglass body for the car and they competed with it in C/Dragster at the NHRA National Championship Drags in Oklahoma City in September and won the Best Engineered Car award.

After the car began racking up wins, other racers, impressed with the craftsmanship and success of the car, came calling. With Nelson’s brother, Tom, building the engines, Martin building cars, and Jim promoting the company, now based in Carlsbad, Calif., it was a huge success.

After building a wild, twin-Chevy-powered dragster called Two Thing in 1960 -– pictured at the top of this column, and also a Best Engineered Car winner -- the Dragmaster gang teamed with Dodge for the 1962 Winternationals, and the Dragmaster Dart was a huge success, winning Top Eliminator with Nelson at the wheel. Before long, orders began pouring in for Dodge-powered dragsters and Dragmaster grew in size to more than two dozen workers to keep up with the demand. Among those seeking the new dragsters were heavy hitters like Mickey Thompson and Roland Leong. In all, they built approximately 250 cars, including about 25 turn-key, ready-to-run machines.

When NHRA lifted the nitro ban in 1964 and Top Fuel became all the rage, the Dragster team opted not to build chassis for the class and instead switched their attention to the newest rage: the altered wheelbase precursors to Funny Car. Among the first cars they built were Dodge Cornets for Jimmy Nix and Jim Johnson that ran the same supercharger 426 Max Wedge engines popular in Top Gas at the time.

The company later began selling additional add-on parts for racecars, and even built a 23-T Ford for NHRA founder Wally Parks, before it was sold in 1995. Nelson, a 1991 inductee into the International Drag Racing Hall of Fame, died in May 2012 but Martin, inducted in 1998, remained busy with other projects in his shop until the time of his passing. 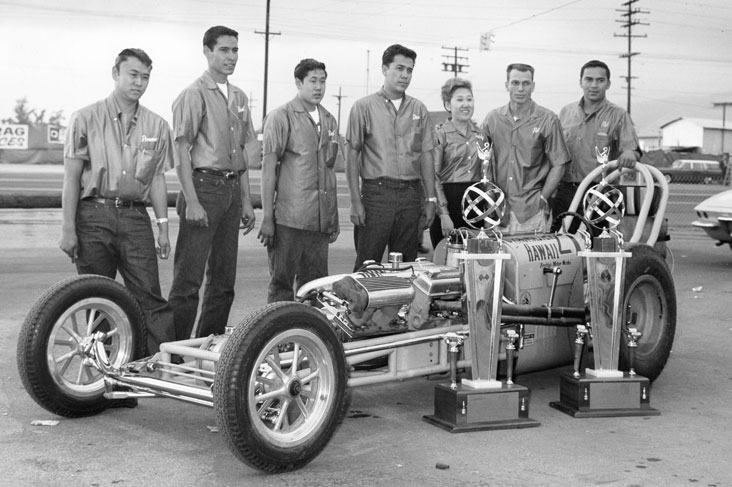 Leong, third from left above with Danny Ongais and crew after they won Top Gas at the 1964 Winternationals in a Dragmaster car, was one of many people whose lives and careers Martin and Nelson touched. Leong first came to the mainland to work at Dragmaster.

“I lived with Jim Nelson and his family,” he told me earlier this week. “My first job there was to remove the engines from the Dragmaster Two Thing that Dode drove. It was a dual small block Chevy dragster with the engines sitting side by side. He raced it Saturday night at Lions and blew one engine. When you pull the engines, you pull both together.

“I had never seen the car and actually had no idea where to start. Remember, I was 17 years old and only somewhat worked on street cars. Well it took me ALL day just to get the motors ready to be lifted out. Had the hoist hooked on it and couldn't even budge the engine, The whole shop was laughing cause I had both feet off the ground.

The engines had special steel flywheels that drove one engine backward from the other. Well when one engine blew it galled all the teeth on both flywheels. And they each had a LOT of teeth. Well I had to file each tooth on the front side and back side of each flywheel. I think it took me the rest of the week. I also swept the shop, detailed the chassis, prepared and painted the chassis, etc. -- you know, all the IMPORTANT jobs -– but I also got to go to the race with Nelson every weekend. Dode was a BIG part of my racing beginnings.”

There will be a Celebration of Life  for Martin on Feb 17 at Dode's Hobby Shop, 810 Palomino Road in Fallbrook, Calif. 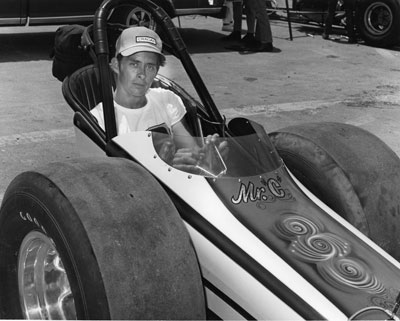 Martin’s loss wasn’t the only won we suffered in the last week (I know … here we go again) as we also learned late last weekend of the passing of “Mr. C,” Top Fuel veteran Gary Cochran. Just before that I got a call that former Funny Car and Top Fuel racer Steve Hodkinson had passed away.

Although Cochran never won an NHRA national event (he did win Top Fuel at the 1971 AHRA Winternationals and a number of smaller events), he was a feared competitor and owns a unique bit of drag racing trivia.

It was Cochran who in early 1971 defeated Don Garlits in “Big Daddy’s” first competition outing in his revolutionary Swamp Rat 14 rear-engined dragster. Cochran’s slingshot beat the bad, black, back-motored machine in the final round of the AHRA Grand American event at Lions Dragstrip, 6.58 to 6.66. He also beat him the following week in a different car –- Carl Casper’s All-American -– at Orange County Int’l Raceway’s All-Pro Series event. Garlits, of course, went on to win the NHRA Winternationals and the class never really looked back, but Cochran had his number before that.

In addition to besting Garlits and his AHRA win, Cochran also was a semifinalist at the U.S. Nationals that year where he lost to Steve Carbone, which set up Carbone’s infamous “burndown” with Garlits. 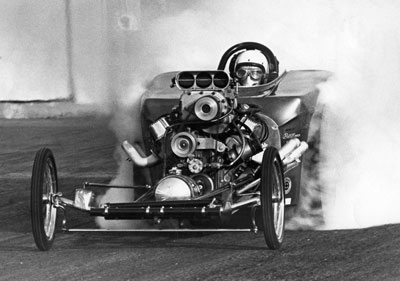 Cochran was a senior in high school in 1955 when, like so many Southern California gearheads of that era, took his hot rod -- in Cochran’s case, a ’47 Chevy -- out to the famed Santa Ana Drags. Cochran’s racing career didn’t take off in earnest until he completed a five-year stint in the Air Force and got behind the wheel of a potent, nitro-burning AA/Comp Roadster that routinely mixed it up with the likes of Larry Dixon Sr., “Flamin’ Frank” Pedregon, and others.

In mid-1967 he moved into Top Gas and won the 1968 Winternationals, but the nitro allure quickly took him into Top Fuel in 1969, first as a hired driver (Dave McKenzie’s Blue Streak Special) then with his own car. He was a front-engined holdout until the end of 1972 before the rear-engined handwriting was on the wall. After parking his own car, he drove for a number of teams, in both Top Fuel and Funny Car, through the end of the 1984 season, including Lisa & Rossi, Jim Terry, Blanchard & Montgomery, Jim Thomas, Marc Cornelius, and R.T. Mehlville. He was an honoree at the 2003 California Hot Rod Reunion and oversaw recreation/restoration of several of his former racecars, including the modified roadster.

Hodkinson also had his own claim to trivia fame in Top Fuel for it was he whom Lucille Lee defeated in the final round at the 1982 Southern Nationals in Atlanta to become just the second female Top Fuel winner in NHRA history.

The two were teammates on the Marc Danekas-led TR-3 Resin Glaze Top Fuel team and although Hodkinson had the better car at this event –- he was the No. 1 qualifier, she No. 2, and he outran her in pre-final-round passes, 5.94 to 6.04 -- his car went silent after the final-round burnout, leading some to question whether Danekas had orchestrated the outcome for better publicity. I’m not one to say, but Lee did run 5.90 in the final, and won the March Meet before Atlanta and was runner-up behind Muldowney at the Sprignationals after, so she was certainly capable of winning regardless.

Hodkinson began racing nitro Funny Cars in the late 1970s, but before that was part of Marvin “Who?” Graham’s stunning Indy Top Fuel win in 1974. In an interview I did with Graham a number of years ago, he specifically credited Hodkinson and tuner Chester Garris for even getting him there. Graham was deathly ill with the flu and the duo not only got the car ready but allowed him to sleep the whole trip to recover,

Hodkinson’s first flopper was a Donovan-powered Vega, and raced a few other cars before Danekas recruited him to the TR-3 team. After the Top Fuel deal ended, Hodkinson was a semi-regular on the NHRA scene, first in Larry Coogle’s Sting and then with his own Funny Car for a number of years through the late 1980s.