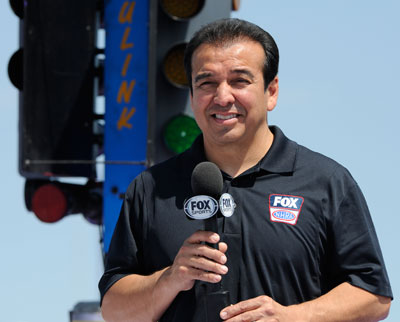 With two four-wide races now on the NHRA Mello Yello Drag Racing Series schedule, including this weekend’s first four-wide at The Strip at Las Vegas Motor Speedway, drivers will have to put even more of a premium on their preparation for the process.

The Four-Wide rules advance the first two finishers of each “quad” into the next round, so it’s not uncommon to see a driver who might have aborted his run in a two-wide scenario stay after the run in the four-wide configuration still with hopes of finishing at least second.

Whether you like the concept or not, racing four cars at a time adds a different dynamic for a driver that has become accustomed to having to face just one opponent at a time.

From the onset, it’s pretty electric when one suits up and straps in and starts only to hear more than one other car start up and start to cackle. You have to trust that your crew chief has factored in how long the other cars run so that it doesn’t change your timing in doing a burnout and backing up.

The most challenging part of four-wide racing is rolling forward for the staging procedure. Pre-staging can be routine, but if you’re in Lane 2, you now find yourself looking across a series of lights that represent each driver’s lane. The tendency for that driver is to look at the light farthest to the right, but at Four-Wide that would be the driver in Lane 4. Sounds easy but still seems to confuse some. Check out the video at right that we filmed at last year's Four-Wide race in Charlotte.

Once pre-staged, no one will like to stage first because it would put you at risk of building unwanted temperature in the engine, clutch, or even running low on fuel if someone is taking their sweet time, whether they are doing it intentionally or not. And once a brave soul does roll in to stage, the others seem to rush in to be second or third into the stage beams.

The concern to being last to stage would be the starter throwing what drivers call a “quick Tree,” meaning that once all cars are staged the Christmas Tree is activated just after staging; it’s always random but can catch you if you’re not ready. 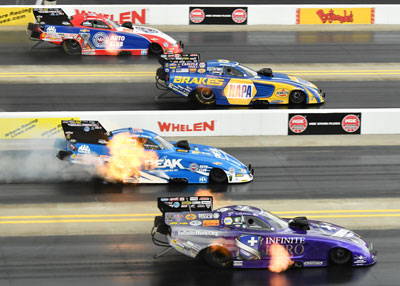 At wide open throttle, the party really gets kicking, especially for the first one out of the gate, because only at the Four-Wides can you potentially beat one, two and even three drivers on a holeshot. That makes being quick off the line as important as ever.

During a conventional race, a driver can have a feel for where his or her opponent is at, but if you get curious at the Four-Wide that could be a big mistake because everything happens so quickly that wouldn’t allow you time to respond to the car losing traction or darting from one side to another, which they do often. Driver focus must be at an all-time high.

Just past the finish line there is a win light on top of the wall in each lane. It’s not easy to see with a handful of steering wheel at a blurred 320-plus mph, so unless one clearly sees their win light, it might be wise to make sure before one celebrates.

One last item that will have to wait for Sunday in Las Vegas. There are a few tricks that only the most experienced and most skilled drivers can attempt that could give them an advantage and if and when I see it I will break it down for you on our FS1 coverage.

Be sure to catch all the action of the Denso Spark Plugs NHRA Four-Wide Nationals on FS1 beginning live Friday night, April 6, with Friday Nitro Live at 7 p.m. Eastern. A special pre-race show will air Sunday, April 8, at 11:30 a.m. that will recap Saturday qualifying, followed later that day by final eliminations, beginning at 6 p.m. Eastern.