Some light reading for a non-racing weekend about how modern technology led the Guinness Book of World Records to remove a legendary, 35-year-old record for performance in a 1980s drag racing video game. And what could we learn from this?
13 Apr 2018
Phil Burgess, NHRA National Dragster Editor
DRAGSTER Insider 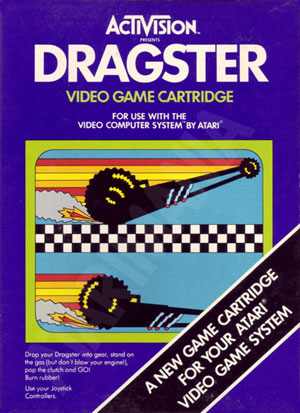 Imagine, all these years later, someone trying to disqualify Don Garlits’ mind-blowing 5.63-second run from the 1975 World Finals –- a record that stood for seven years -– because it just doesn’t seem technically feasible. That’s not about to happen but there’s an interesting news parallel I just discovered.

It’s not often that drag racing becomes a hot topic in the video game subculture, but it happened earlier this year when a 35-year-old world record was disqualified from Guinness’ video-gaming world record lists. It’s kind of an offbeat topic for this column, but I’m intrigued, and it’s all about drag racing, so here we go.

The game in question is Dragster, a 1980 offering for the Atari 2600 home gaming system, a platform that is among the grandparents of every video game console out there. It didn't have a lot of power, and the graphics were pretty rudimentary, but it open up a whole lot of possibilities and killed a lot of weekends (and relationships) for many of us.

For what’s it’s worth, by Controller Cred is pretty high. My parents bought us a Pong system -– literally a very basic tennis game with two rectangular paddles that moved up and down and batted a square "ball" back and forth -- when it first game out in the early 1970s, and I followed with Atari 2600, Intellivision, ColecoVision, and Nintendo systems before going computer gaming for a decade. I played all of the early drag racing video games, from Gamestar’s Top Fuel Eliminator (for Apple IIe) to Cosmi’s Shirley Muldowney’s Top Fuel Challenge (for Commodore 64) to Family Software’s Drag Race Eliminator (for IBM), and was a consultant and beta tester for Tantrum Entertainment’s breakthrough PC game, NHRA Drag Racing. I’ve also played on organized teams (clans) in online tournaments (first-person shooters, not racing games, though I’ve done that online, too), so let’s just say the whole thing very much interests me. 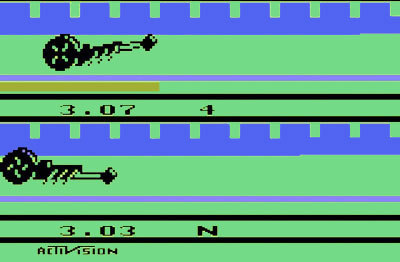 But back to Dragster. It’s a fairly simple game (with stick-figure 1980s graphics) with the very basic Atari joystick. Mashing the red button controlled the gas and moving the joystick to the left worked the clutch and to the right shifted gears. The trick was to shift before blowing your engine and then keep your revs high by repeatedly tapping the stick (engaging and disengaging the clutch), again and again without going too far.

When Dave Crane created the game for Activision, it was theorized (but not documented) that the quickest e.t. that could ever be recorded in the game was 5.54 seconds. (At the time, NHRA’s best-ever run was still Garlits’ 5.63; we wouldn’t see a 5.54 in real life until Gary Beck popped one off at the 1982 U.S. Nationals, followed quickly at the event by a 5.48.)

So, when Todd Rogers, who is credited with being the first paid professional gamer, allegedly busted off a 5.51 in 1982, he set a mark that has stood as the record throughout time, and was the Guinness Books of World Records’ longest-standing record. Although he had no photographic or other evidence of the record, Rogers’ stature in the community allowed the record to be entered. In explaining how he reached a score that even the developer did not expect, he explained he started in second gear and downshifted at the end to create his record-breaking run (a technique of which he claimed that the designer was unaware).

This was all well and good (though there were lots of naysayers) until the last year or so, when people began to take a hard look at it and, with technical savvy that didn’t exist in the 1980s, started disassembling the now-mythical performance.

Players began developing emulator programs of their own, reading live frame-related cues onscreen to auto-shift and blip the throttle. Super user Omnigamer got access to the actual game code and programmed his computer to optimize every single element (a process called “tool-assisted speedrunning,” or TAS), and he couldn’t go quicker than 5.57 (and also found there was no way to start in second). Check out the video here.

Other gamers took a deep dive into the actual console to see how (geek speak alert) the Atari 2600 system bus interacted with the RAM to see if even a hardware malfunction could have led to the time. There’s all sorts of other technical gobbledygook about “decaying algorithms” and such that will turn your vision fuzzy.

If this is an intriguing to you as it is to me, you can check out this YouTube video (it has more than 2.1 million views, so apparently it’s intriguing to a lot of people) “Why Can't This World Record Be Beaten? "The Impossible Speedrun"; very thorough. Also, watching this video will -- as per YouTube’s “no one can eat just one” related-videos widget -- lead you to a ton more about how a seemingly obscure game involving your favorite sport has become the talk of the gaming word. Weird, right? 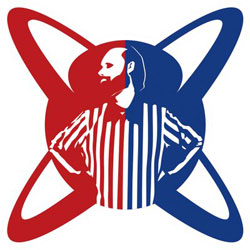 Anyway, all of this evidence finally convinced Twin Galaxies, which is the gaming community’s arbiter of records, to disallow the 5.51 (which led to Guinness also stripping the record). On the website’s forums, TG representatives explained, “Based on the complete body of evidence presented in this official dispute thread, Twin Galaxies administrative staff has unanimously decided to remove all of Todd Rogers’ scores as well as ban him from participating in our competitive leaderboards. The presented software analysis model concluded that achieving score times of less than 5.57 seconds is not possible under standard and normal play conditions.” Their full explanation can be found here.

Because of Rogers’ outsized personality and his claims to scores of other undocumented records that were beyond the pale of duplication/belief, the gaming community lavished attention on this story with headlines like “Video game legend thrown out the record books after times found to be impossible” and “Dragster record holder stripped of his title after 35 years,” and even The Washington Post did a story on it.

So, above and beyond my interest in this story because it combines two of my passions – drag racing and video games –- it got me to thinking about a couple of things. 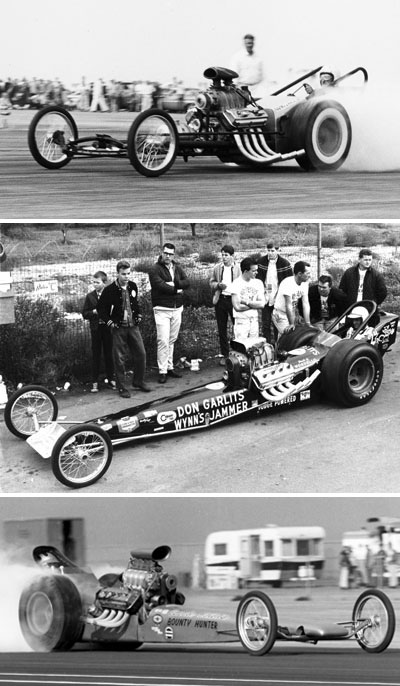 Just as Todd Rogers had no proof of his 5.51, no empirical proof exists to answer a few niggling questions of drag racing history, like who made the first 200-mph run. Was it Chris Karamesines at Alton? Don Garlits at Island? Connie Kalitta at Indy?

Kalitta pointed out in a 2011 interview that both Alton and Island had hoses that stopped the timers when the cars ran over them (think old gas station) while Indy has actual light beams; Garlits disputed Kalitta’s memories about the timing system. Karamesines said “Garlits knows” that “the Greek’s” 200 was legit.

While I’m not going to weigh in on any of those claims, it certainly was not unheard of for promoters to report false times (back then they were called, for some reason, “popcorn times”) to increase a track’s reputation both to the fans and racers, and, yes, there were multiple timing systems (the most maligned being Fosdick) in place, so who knows? Wouldn’t it be great if all those old cars had data-recorders like we have today? We know that all of today’s data recorders log time and distance and wheel speed, so, barring a bit of leeway based on staging rollout, it’s a pretty good bet that we could discern pretty-close e.t.s and speeds right out of the data recorder. Mystery solved, amirite? 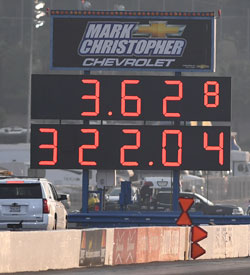 Which got me to thinking that because today’s crew chiefs capture an amazing variety of data for each run and, to the best of my knowledge, no crew chief has ever looked at his data and, regardless of the performance, found a few place where a little more from Column A and a little less from Column B wouldn’t have resulted in a slightly better run. So, what about a real-life “speedrun” (or a least a hypothetical one), one that eliminates all the bad parts of a run and only keeps the good ones? Could crew chiefs do a for-fun hack of The One That Got Away to see the results? (Longtime National Dragster readers will remember a gentleman named Patrick Hale, who created a program to do just this type of thing.) The trick, of course, is that unlike the Dragster video game, where the track (and traction) and atmospheric “conditions” were always the same, we don’t see that in the real world. Clay Millican told us that when he set the 3.62 national record in Pomona that he stepped off the gas early. It wouldn’t have been the first 3.50, but how close could it have gotten? Could Dave Grubnic tweak those numbers in his computer to make it a 3.59? Probably.

For keyboard drag racers like me, there’s not an awful lot of drag racing in the video game world. The latest console version was a PlayStation 2 release about a decade ago that was more or less a port of the Tantrum PC game but was very cool in that you had to adapt your tune-up to weather and track conditions. Today there are a handful of mobile games for iOS and Android that are fun to play, chief among them Minicades’ Dragster Mayhem (which was played for a while by a lot of today’s stars) or the Mopar-branded extension to that, Drag N Brag, that has all kinds of non-dragster fun (Funny Cars, Pro Stockers, Pro Mods all the way down to bracket cars (plus a jet dragster!). There’s no real tuning involved -- success is predicated upon a good burnout (which sets tire heat), a quick leave, and staying in the groove) – but they’re still fun to play while you’re waiting to get a haircut.

So download away and have a good day. And don’t you dare think about questioning Garlits’ 5.63.